Rodolfo Rodriguez is a major-league star, although you won't see his name on the sports pages of your local newspaper. An avid New York Yankees fan since his childhood in the Dominican Republic, he covers first base occasionally with a team of friends, when he has the time. But his real wins are scored not on the playing field but within dining operations at two healthcare facilities in New Jersey: Lincoln Park Health Center, a 547-bed nursing care center for patients of all ages; and the adjoining 158-bed Lincoln Park Renaissance, a sub-acute care and retirement facility. 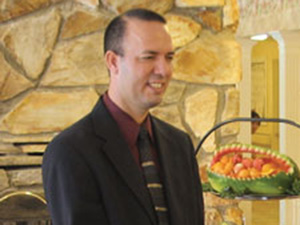 Four years ago, Rodriguez hit one out of the park (or rather within Lincoln Park) by instituting a buffet service that has the fans (patients, residents, employees and administrators alike) on their feet and cheering. It has turned conventional service on its ear by being the daily dining room service for all dayparts in this upscale facility.

Today, patient satisfaction with foodservice has jumped from merely "acceptable" to "excellent," as monitored by the facility's own social services department. Overall food cost has decreased 5%, a direct result of decreased plate waste. And, the socialization factor among patients of all ages (the average age in the larger facility is about 45) couldn't help but improve now that the majority take their meals in the dining room rather than alone in their rooms.

Special diet inclusion: "I'm told we're the first facility of our type in New Jersey to do buffets for patients and accommodate all special diets (except tube feeding)," Rodriguez asserts. "When I became director, we had a menu planning meeting every month with patients and employees' meals are free for all 800 staff members every day. There was much disagreement over what they liked or disliked since they're from all over the world."

"As a solution, I eventually came up with the idea of a buffet. We run it like a five-star buffet complete with ice carvings that our chef does for special occasions. And, now we have no empty beds (there used to be 60 or 70 most of the time) but word got out about the quality of our buffet service."

From the outset, Rodriguez put an emphasis on scratch cooking. There are now 30 scratch-made soups each month, and one of the most popular areas is the sautee station where a chef prepares shrimp and vegetables (at last once a month) or other entrees to-order while keeping an eye on the adjacent grill, where he may have pork chops being readied for service.

There are nine chefs in all, as well as five registered dietitians among the 110 foodservice employees. During meal times, they're given an able assist by members of the recreation department and nurses' aides. Rodriguez prefers to have his own staff on the serving line while others help patients at their tables

Building buffet service: There are three separate buffets: one for patients in each facility and one located in the larger facility for all staff. Each of the dining rooms can easily seat 200 people and boasts a wood-burning stove that is in use during lunch and supper whenever there's a chill in the air. More than 50% of the items on the staff buffet are identical to those for patients.

"For each buffet, we built three 15-foot long tables with sneeze guards and between each there's a big round table with an umbrella that we use for eye-catching displays of fresh fruits and vegetables," Rodriguez explains.

—For breakfast, staff members set out an array of cold cereals, (the buffet display includes 96 in the case) two hot cereals (farina and oatmeal), plus eggs, toast, French toast, pancakes and Danish pastries.

—The supper buffet boasts a different soup each day, a variety of cold sandwiches plus a hot alternative, usually chicken.

Less room service: Previously, there was only one dining room, with five staff members taking orders, serving about 80 people. Since patients thought they had to wait too long (anywhere from 30 minutes to an hour) most preferred to order a tray and eat in their room. "Today, we deliver about 100 trays to the small building and only about 150 trays to the larger one, so that's about 250 trays out of the total of 705 patients," Rodriguez explains.

With fewer trays being ordered, plate waste has substantially decreased, primarily because people often ordered more food than they could eat, then sent back items untouched. "We are at least 5% down in food cost since starting the buffet," he points out. "It was running $98,000 per month for (the health center), $125,000 for both buildings."

Color-coded: The fact that patients on special diets can also be accommodated by buffet service is probably the most intriguing aspect of the concept. To make it work, Rodriguez has trained at least 30 members of his staff and stationed them on the line. "We make sure patients understand their special diet," he explains. "They wear color-coded bracelets; 13 different colors represent 13 different diets. Plus employees have lists with the patients' names and diets, just in case there's any question."

"For example, we'll puree a pork chop with a bit of gravy and (separately) green beans with a bit of butter," Rodriguez explains. "We'll strain the soup for them, and they can have regular white bread without the crust."

Custom fit: For other diets, different versions of the same foods are set out having been prepared in advance (i.e., less sweet, low salt). Since many patients require liquids that are of "“nectar consistency" or "honey consistency," specially prepared beverages such as water, milk, juice and coffee are purchased; these patients can usually handle regular solid foods. Presently, only one patient requires a renal diet and he receives a tray in his room.

Staff training is key to the program's success. Rodriguez admits the department he took over almost a decade ago was not the finely tuned team of today. "In the beginning, we had a lot of problems and I had to terminate many people," Rodriguez recalls. "They were working without direction. I had many meetings with them and discussed what we needed to do. created a chef supervisor position and an assistant chef supervisor. Since they work alternate weekends, there's always one on the job. I also created the position of chief dietitian and she and I write the menus. Now they know I make all promotions (including management positions) from inside the department since I feel they created this style of service with me."

Intent on having "the best foodservice department in New Jersey" and reflecting the goal of his administrator, Mimi Feliciano, Rodriguez requires all of his employees to take the sanitation class every year and be certified (or re-certified) by the town. Many of his employees also pursue the English as a Second Language classes offered twice a week after work, encouraged by the example their bi-lingual boss sets. For his part, Rodriguez pursues every opportunity to further his own foodservice management credentials by taking courses offered at nearby Rutgers University. He's also on deck and warming up for the next potential home run.