The Apostolic Christian Church, which believes in and promotes the doctrines of the gospel found in the Bible, operates 10 nursing homes for the elderly in five states, in addition to two hundred apartment units for elderly persons not requiring specialized care. When one of them—Apostolic Christian Resthaven, serving 50 residents as well as those in 18 independent apartments in Elgin, Ill.—sought a director of dietetic service eight years ago, a warm, experienced and enthusiastic Jewish dietitian was promptly hired for the job. 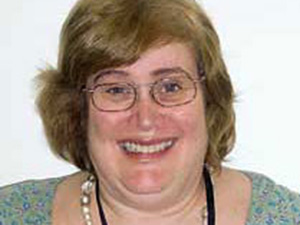 As the administrators knew—and the dietitian soon found out—religious beliefs have nothing to do with qualifications for the job. Now, about the only time Nina Dubman, RD, LD, CFE, thinks about hers is when she leaves work early on Fridays and takes all major Jewish holidays off, as agreed to in her contract.

Hearing aid: To know Dubman at all is to realize that she's an unflappable, can-do, low-key person who can be depended upon to get the job done without losing her cool. And—possibly most important of all attributes—she's a good listener. It's a trait that her employees as well as the residents have come to value. In fact, without it, a total revamp of the facility's recipes and menus undertaken this year could have caused great dissension both back- and front-of-the-house in this 20-year-old, upscale facility.

According to Dubman, upon her arrival at Resthaven in 1996, there had not been a revamp of menus in more than a decade—"and I felt it was overdue." Using her distributor's software package, she and her staff created a menu that was, and is, individualized for the facility's needs and focused almost entirely on scratch-cooking; about 95% of items on the menu are homemade, from soups to entrees to breads and cakes.

In addition, "my arrival added more continuity to the department because I'm also a clinical dietitian," Dubman explains. "We were able to eliminate the consultant dietitian position and I'm therefore responsible for doing menu planning and patient documentation. I do each quarterly assessment, annual assessments, lab results and new admissions assessments. Plus, if there's any improvement or deterioration in a resident's status, we have to do assessments as well as calorie counts if they're not eating well."

With the introduction of the new menu this year, Dubman expected complaints, especially when it came to such relatively "nouvelle" items as stuffed salmon, but they didn't materialize. The most she heard were a few questioning, "what's that?"

Carb counting key: The fact that only 25% of residents are on a regular, non-restricted diet doesn't seem to faze the staff, who turn out diabetic, mechanical, dysphagia, puree, low-sodium, diabetic and calorie-restricted meals, as well as versions featuring no concentrated sweets. "The most challenging aspect of 'special diets' is that we use carbohydrate counting," Dubman points out.

"This actually allows diabetics and those on 'no concentrated sweets' to have more items than they could before. I started this when I instituted the new menus. Now, there are new diabetic desserts and upgraded puree diets—including puree breads for sandwiches and slurried cakes so they're like the real thing."

Puree breads have proven to be a successful addition from the residents' perspective and not too time-consuming for the kitchen. A commercially packaged puree bread mix is put into a loaf pan along with hot water. It sets within 20 minutes and can also be shaped with a scoop to make rolls. For breakfast, residents on puree diets can now enjoy scrambled eggs with "toast."

Dubman believes she's got the full support of administrators, since they'd rather have the residents satisfied with good quality food—as highlighted in the facility's promo brochures—than dining services striving to be a profit center. Since administration favors the made-from-scratch approach emphasis over the use of convenience items, no staff reduction has been necessary.

Positive labor impact: Staff retention is about 98%, with only one opening in the past three years, she reports. "Without turnover, my staff is well-trained and can learn how to make good food from scratch using quality ingredients."

In reality, bringing all of Dubman's 12 employees—including full- and part-timers—up to speed in the shift to new menus and recipes has taken a lot of time, patience and numerous food production meetings.

"Throughout the whole four-week cycle—previously we ran a five-week cycle—we met for a few minutes every day to explain the recipes," she recalls. "The most difficult part was teaching them to measure ingredients using the metric system. Now, they're used to it and understand it. It's all part of my being visible and readily accessible. You're there to in-service—and you can't in-service your employees enough."

Dubman attributes the lack of turnover to listening to employees both during scheduled meetings and on a regular, day-to-day basis. "If they have issues, they're not leaving because we discuss them and try to solve any problems. They know I'll help them and make their job easier," she says.

Dubman's philosophy of being visible and available is much the same when applied to residents.

"Complaints—and I get very few food-related complaints—decrease if you're visible," she asserts. "We have some people who are visually handicapped and they'll sometimes complain they did not get what they wanted until you point it out to them. There are other residents you'll never satisfy because they don't want to be here anyway. But you keep on trying to make them feel they're part of the facility."

Increasing choices: In the restaurant-style dining room, complete with uniformed waiter and waitress service, the menu items of the day are verbally presented. Previously, there was one item plus an alternate based on food preferences. Now, there's a main entree, an alternate and four substitutions for a total of six choices. Alternate selections generally need only easy prep and include such fare as hamburgers, grilled cheese, cottage cheese and fruit.

When Dubman first arrived at Resthaven, she introduced the Meal of the Month concept, a true resident pleaser. "Members of the Residents' Council Food Committee write the menu which is usually served at dinner as a special," she explains. "It might be chicken fingers, fried shrimp or perhaps short ribs, along with various sides and homemade muffins. Committee members meet once a month which lets residents feel they have a say. We try to listen to them since this is their home."

As residents enjoy their new menus—such as oven fried chicken with vegetable and potato, or Southern-style barbequed chicken breast with cornbread; broccoli, tomato/mozzarella salad; and homemade strawberry brownies—a certified nursing assistant (CNA) circulates in the dining room and is responsible for checking the plate of each resident following each meal. If someone isn't eating well, it's reported to Dubman and a three-day calorie count is conducted.

Fond memories: Dubman has a particularly warm place in her heart for these CNAs since she fondly remembers her first job as a CNA when she was a high school student and worked with the elderly. At that point, she decided to become a nurse, but a part-time job in campus foodservice (while working her way though college) proved so enjoyable, she switched her major to foodservice management and dietetics—and never looked back.

Most recently, Dubman has been on a tireless campaign to revitalize the Chicago Midwest chapter of the American Society of Healthcare Foodservice Administrators (ASHFSA) in order to help her healthcare cohorts remain at the top of their professional form. As a board member for the past eight years and Chicago chapter chairperson since 2000, she's taken the lead in rebuilding the membership (it's now at 60), phoning people to come to meetings and convincing suppliers to underwrite the appearance of key speakers.

This year, Dubman received ASHFSA's 2004 Chapter Leadership Award for dedicated service to the revitalization of the Chicago Chapter.