Mark Bordeau, senior director of foodservices for the Broome-Tioga Board of Cooperative Educational Services (BOCES) in Broome and Tioga counties in upstate New York, is like a quarterback running a football team’s offense. His teammates are the school districts’ foodservice directors who make up the foodservice department of the Broome-Tioga BOCES. The BOCES is the collaborative effort of 15 districts, which coordinate services, such as child nutrition, in an effort to cut costs and provide high-quality programs to their students. As director of foodservices for the BOCES, Bordeau helps coordinate and manage programs for 10 of these districts. Like any good quarterback, Bordeau is innovative and quick on his feet. His quiet confidence and dedication are two reasons the BOCES’s foodservice programs have been able to expand during the past 10 years under Bordeau’s leadership.

Humble beginnings: Bordeau was hired by the BOCES in 1999 to run the foodservice program at the 7,000-student Binghamton City School District. Ray Dennison, then director of foodservices for 2,600-student Johnson City Central School District, another district in BOCES, recommended Bordeau for the job. The two had met at industry events, and when the job at Binghamton became available, Bordeau jumped at the opportunity to work with Dennison. 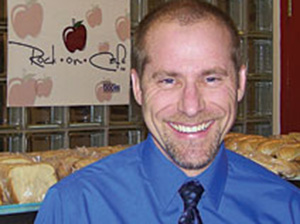 Although the BOCES foodservice department existed before Bordeau, it wasn’t until his arrival that the group’s full potential was realized. Under Bordeau’s leadership, the BOCES now has $5 million worth of buying power. The board has also partnered with many community groups such as the Broome County Health Department to develop nutrition and fitness programs. Additionally, all of the BOCES elementary schools are on a standardized lunch program, called Rock on Café, which melds nutrition and education to create a fun dining experience.

Always the team player, Bordeau is quick to point out that he is just one person in the collaborative effort. But Dennison says Bordeau’s leadership was the element that finally brought the districts together.

“All the schools at the time were individual,” Dennison says. “Before Mark came, we had started some small co-op purchasing groups, but with the BOCES under Mark, we were able to make what we were doing more sophisticated and organized.”

Dennison adds that Bordeau “is sincere and people know that, and that’s why they are willing to work with him. Mark has the ability to look at things and really analyze them. So many times, a decision is made too quickly and it’s not necessarily the best choice. Mark steps back and looks at a problem from everyone’s angle.”

Dennison wasn’t the only one to notice Bordeau’s leadership ability. In the summer of 2004, the longtime director at neighboring 3,900-student Vestal School District had to leave her job suddenly. Bordeau was asked to step in and get the program running.

“I had no intention of running that district,” Bordeau says. “After a couple of months, the administration was happy and asked if we would continue to oversee the program.”

Around the same time, another district in the BOCES, 2,000-student Windsor School District, asked him to be a consultant to help it get the foodservice program out of the red. The next school year, another district, 1,900-student Susquehanna Valley, came calling after its director left for a new job.

Rock on Café: “The directors in the area have always worked closely together,” Bordeau says. “We had talked about hiring a dietitian to help bring us to the next level. We talked about it but never went forward with it.” 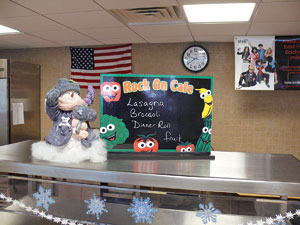 In October 2005, Bordeau decided to take that step and hired a registered dietitian. Even though the dietitian, Molly Morgan, was hired to work in the Binghamton schools, Bordeau, in a move that once again displayed his team spirit, decided to work with Morgan and the other directors to develop a nutrition plan that could be implemented throughout the BOCES.

This nutrition plan morphed into a program called Rock on Café. The program, which has been implemented primarily at the elementary school level, includes menus, marketing and nutrition education. All of the 10 schools in the foodservice department under the BOCES are now on the Rock on Café program. An additional five districts outside of the BOCES have also signed up to use the program, which reaches around 35,000 students.

With Morgan’s expertise, the menus have changed to include more whole grains, fresh fruits and vegetables. Bordeau says they have used “stealth nutrition” to slowly introduce students to the changes. For example, the chicken nuggets now have whole-grain breading and the pizza crust is now whole grain. The Rock on Café menus were rolled out in elementary schools during the 2006-2007 school year.

“All of the districts were doing different menus,” Bordeau says. “Now we are all on the same menu.” Districts on the program offer one lunch entrée each day, along with a Rock on Café signature salad of the week. Because all of the districts in the BOCES foodservice department are on the same menu, the bid power of BOCES is that much stronger because they order larger amounts of fewer items.

Since starting the program, the 15 districts, on average, have seen a 3% increase in participation. 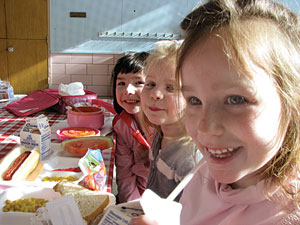 Currently, Bordeau, Morgan and the other directors are working to get a Rock on Café program running at the secondary schools. Bordeau says this has been more challenging because students at the secondary level expect more choices and the likes and dislikes at the districts are more pronounced, making it nearly impossible to create one consolidated menu. He adds that the kitchens have varied equipment, which also complicates creating a standardized menu. Instead, Bordeau says the department is looking into creating healthy signature items that will be sold as Rock on Café items.

Community involvement: Marketing and community involvement are two other important components of Rock on Café. Because Bordeau and others have developed relationships with community organizations, such as the health department, sports teams and media, the community has taken a stake in the health and nutritional education of the students. Local television and radio stations visit schools every Tuesday to tape students reading the Rock on Café menus for the following week. Those tapes are then shown every morning on the stations.

The schools and local sports teams have partnered to do promotions to raise donations for area food pantries. There was a Rock on Café night at a baseball game. Tickets for the game were only $2, and any person who brought items to be donated to the food pantry received a free ticket for another game. “We aren’t just trying to reach out for the foodservice department,” Bordeau says. “We are trying to be a security net for the whole community.”

Bordeau also partnered with the hockey team in 2006 for a program called Step it Up. The team developed a DVD that talked about the difference between good and bad nutrition and the importance of exercise. The DVD was shown during gym classes. To go along with the DVD, students were given a Step it Up scorecard to record the amount of fruits and vegetables they ate, the amount of water they drank and the amount of exercise they did during a one-week period. Student turned in completed scorecards, which were then selected at random and prizes were awarded to those students.

Another collaboration with the baseball team was done at Binghamton High School. The team talked about the importance of drinking enough water. Nearly 500 students signed up for a Got Water Pledge in which students pledged to drink eight to 10 glasses of water each day.

“The most rewarding part of my job is knowing we are really making a difference in the lives of our students,” Bordeau says. That statement is indicative of Bordeau’s philosophy. He knows his job isn’t just about feeding people, but that it’s about bettering the lives of his students. And, perhaps the most telling part of that statement is the fact that he says “we” instead of “I.”