When Lesha Colin was in high school in Philadelphia, she dreamed of running a hotel, perhaps something on the order of The Sands in nearby Atlantic City, N.J. Today, as fate would have it, she brings upscale dining and a touch of show biz flair to Winchester Gardens, a continuing care retirement community (CCRC) in Maplewood, N.J. This Sodexo Senior Services account, just about 10 miles from New York City, is home to 240 independent and 90 assisted living residents. 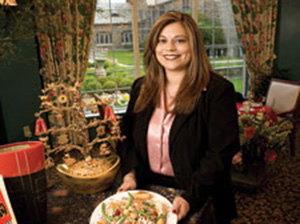 Shortly before she graduated from Widener University in Chester, Pa., where she earned her BS degree in hotel and restaurant management, Colin’s mother died. Being an only child and grandchild, when she graduated she took a job with Philadelphia-based Aramark Corp., so she could remain close to her family. After working at Aramark for a year and a half in the B&I sector, she left to join Marriott Management Services, once again in the B&I sector. But 11 years ago, Colin got married and moved to New Jersey, which meant finding another job. Her new position, with The Wood Co., finally brought her into the realm of senior dining.

Urgent issues: Five and a half years ago, when Colin arrived at Winchester Gardens, the list of challenges she faced was fairly extensive, she recalls. For example, production and inventory systems were not in place in the back of the house, and turnover among the wait staff and management was high. (Overall, there are about 100 foodservice staff members, including hourly employees and managers.)

“Sodexo’s Quality Management Systems [QMS] weren’t being adhered to since the company hadn’t been able to find the correct manager to turn it over and make it a successful unit,” she recalls. “At the outset, everything was urgent, but little by little, within three to six months, I started to see good changes in the dining rooms. I hired an executive chef and sous chef, implemented new production and inventory systems, and I was able to delegate responsibilities to my five-member management team: assistant director, healthcare manager, dining room manager, executive chef and a sous chef.”

Wait for the beep: In the front of the house, there were several food quality and service issues. One of them was the complaint from many residents that they often had to wait to get into the main dining room for dinner. Borrowing a restaurant solution, Colin implemented a beeper system. Since the main dining room opens at 5 p.m., with seating until 7 p.m., residents can come down any time they like, receive a beeper at the host stand, then wait in the adjoining cocktail area to be paged. As a monotony breaker, free wine, beer and snacks are provided in this space Friday evenings, with non-alcoholic beverages and snacks offered on Tuesdays. However, residents can bring their own liquor any evening, and many of them store their private stock in a cabinet provided in that area.

Since many independent living residents are out and about during the day, lunch doesn’t typically draw a crowd. “We do have the Grill Room open for lunch seven days a week from noon to 1:30 p.m. We also implemented an ‘early evening’ grill program from 1:30 to 3:30 p.m. with 10 selections menued,” Colin points out. “Everything is made to order, from liver and onions to grilled fish and eggplant parmigiana. Only about 10 people come each week between 1:30 and 3:30. For lunch, we serve anywhere from 20 to 40 each day and more on the weekends, since residents [often] come with their families.”

For special occasions, residents are welcome to make reservations to dine in the more formal setting of the 35-seat Wintergarden Room, which adjoins the main dining room.

Training the trainer: Staff turnover has now decreased to about 32%—attributed in good measure to QMS implementation and training, which instills in staff members a sense of confidence in their abilities—but Colin wants to improve upon that number. During the past six months she’s revamped the training program with a focus on training the trainers. “My assistant manager and dining room manager have developed a seven-day training program, and they meet with the people who will be the trainers. For example, they’re told, ‘This is what we want you to do on day three.’ They have to be able to answer residents’ questions, such as: ‘How many flavors of ice cream do you have?’ ‘What is your fat-free salad dressing?’ ‘Where is the green tea?’ These are the kinds of things that impact service. Since January, when a new person starts training, they’re with the same trainer the whole time, every day. We don’t want to lose people because they’re frustrated with respect to training.”

Consistent cycle: Any good manager aims to stay within budget and never run out of food. Both of these are on Colin’s short list of concerns, even though she notes that she’s been under budget every year. Recently, she’s zeroed in on dinner production to ensure meeting both goals. “We give a free lunch certificate to a guest if we run out of a featured item,” she explains. “But we have a consistent five-week menu cycle—[for example] the same fish [is] on [the menu] the same day every five weeks. We’ll count the server tickets at the end of the night; leftovers are very minimal, but now we want written counts.”

How it works: Each day of the cycle, there are three entrees, one fish and two other choices. (Salmon is offered every Sunday and Wednesday.) So, for example, whenever trout is on the menu, there’s also a choice of lasagna and liver. “By having exactly the same mix, we know their preferences so it’s easier to forecast the number of portions of each that will be needed—and prevent running out of any featured item,” she contends.

With a stable management team now in place, Colin has been able to get involved in several Sodexho initiatives, including its National Diversity Council for the healthcare division. Currently, she’s one of only two members representing Senior Services accounts. Her efforts in support of diversity and inclusion were most evident in the creation of a day-long celebration of Black History Month last year that featured numerous events.

A gospel singer from Delaware—recruited for the event by Colin’s assistant manager—entertained during a luncheon for all building employees. Activities continued until 6 p.m. in the Great Hall, with background music provided by a pianist seated at the Hall’s baby grand. Residents, most of whom are Caucasian, happily posed for photos wearing African headgear.

“When the mayor of Maplewood arrived in the auditorium at 2 p.m., we had six kids do a welcome dance,” Colin recalls. “We presented the mayor with flowers and traditional kente cloth from Ghana that we bought from a woman who owns a fabric shop in Maplewood. He was very gracious, welcomed everyone and spoke of diversity in Maplewood.”

African fare: Following an employee fashion show of African attire, a staff talent show and a screening of a film that featured Duke Ellington and his orchestra, it was 5 p.m. and time to serve up some African fare. Peanut butter soup and corn and smoked turkey chowder simmered at the soup and salad bar, while the enticing aroma of catfish, beef short ribs and fried chicken with “country fixin’s” wafted through the room.

By involving employees and residents in these diversity initatives, Colin has presented some truly educational, entertaining and delicious events. As a result of this impressive special event, Colin was selected as a regional winner and, ultimately, the Senior Services division-wide winner of the company’s The Spirit of Sodexho Award (2006) for leadership in the support of diversity and inclusion.

“Not only is Lesha dedicated to ensuring that the residents are the heart of everything our employees do, she is also committed to forming a true sense of community between employees and the residents,” says Joe Gorman, senior vice president of Sodexho’s Senior Services Division. “Her diversity initiatives, especially the Black History Month event, are designed to allow the employees to share their culture with the residents, thus fostering a stronger sense of community.”