More than a decade ago, a handful of hospital operators in the U.S. took the bold step of replacing their traditional cafeterias with foodcourts. Even today, a fully nationally branded operation—especially in a self-op location—is not all that common. But in Canada, a fully branded foodcourt was not to be found in such a facility until Khaleed Khan arrived on the scene three-and-a-half years ago. As regional manager for hospitality for Capital Health, he's built upon his more than three decades of experience in other business sectors to create a trend-setting location at 675-bed Royal Alexandra Hospital in Edmonton, Alberta. 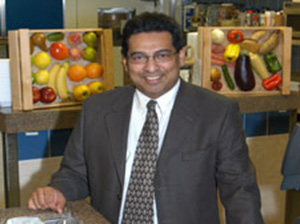 Surpassing all expectations, the installation increased the hospital's sales by a whopping 72% (from $1.8 million to $3 million) in its first year of operation. This year, retail sales will be more than double that of the pre-foodcourt operation—and it's only June.

Super model: By judiciously choosing franchise operations that would entice customers, then honing financial agreements to benefit the hospital, Khan has created a viable model—and a warm and welcoming ambiance—which can be emulated from the Maritimes to the Rockies. Also ahead of the curve in creating healthful options, Khan had previously created a salad-to-go concept with ingredients packed in a bubble-top container designed to his specifications. He's brought that concept—and expanded the offering—to the hospital foodcourt, as well.

Khan, with 27 years of experience in managing branded airport concessions and hotels in Canada, was even more determined than regional dir. Susan McKay—who hired him in 2000—to move the foodcourt plan, which had been shelved for the previous five years due to budget constraints, to fruition during his first year on the job.

"I'm responsible for all the retail and vending operations at six self-op hospitals in the Edmonton area," he explains. "My main focus is on the two larger hospitals, 650-bed Univ. of Alberta Hosp. and Royal Alexandra—which we fondly call 'Royal Alex'. My first task was to develop the full branded foodcourt concept which was totally new for Canadian hospitals."

Picking the brands: Aiming to emulate what was done at airports, Khan chose the retail mix he felt was appropriate to this open-to-the public location geared to serve staff, visitors and community neighbors. His choices also reflected the findings of a staff survey conducted previously. Open from 6 a.m. to 11 p.m., the basement space measures 10,600 sq. ft. with seating for 330 although the building population is 4,500. Not all concepts are open at all times since they're designed to serve various day-part needs.

Today, four franchise concepts plus one in-house brand are up and running. "Healthy Choice Trendz, operating in 550 sq. ft. of space and manned by three employees, is our 'flex' brand," he says. "Since branded concepts can create menu fatigue after a while without the right mix, we built in flexibility. Healthy Choice Trendz—a registered concept of Capital Health—currently offers stir-fries presented as display cooking on a griddle. In that concept we also created a juice and smoothie bar to meet a different day-part need, as well as a fresh sandwich/ salad/wrap program."

The four franchise concepts include:

Tim Hortons is the "jewel" in the Royal Alexandra foodcourt "crown." Although this strong Canadian brand serving multiple day-parts was projected to handle 17% of the business, it has surprised everyone, including Khan, by topping 40%.

Now in its third year, the foodcourt has already achieved a 100% increase over pre-foodcourt sales and Khan expects to close the year with about $3.6 million in sales. Concomitantly, the number of transactions has increased from 600,000 to one million.