It’s been a stellar decade for New York City-based Restaurant Associates (RA), a division of Compass Group, and so, too, for Julie Sajda. In 1997, as a senior in the four-year hotel, restaurant, travel administration program at the University of Massachusetts-Amherst, Sajda took a summer class during which a guest speaker, Victoria Vega (then with Aramark, now a vice president at RA) served up enticing details of careers in contract management. 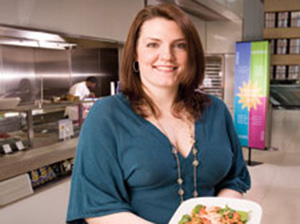 Sajda, who had until then been focusing on public restaurants, sat up and took notice. Upon graduation, she was hired by RA as café manager at its Bertlesmann account in Manhattan.

Sajda progressed steadily from one new challenge to the next within the contractor’s constellation of prestigious New York accounts. Currently, she serves as foodservice director at the Hearst Tower, the most recent—and spectacular—jewel in RA’s crown. The position is one she’d coveted ever since attending the project presentation and then learning that RA had won the account. She was on site while construction was still underway and brought all her previous experience to the process of gearing up for the opening last May, as well as to continually improving the operation throughout the past year.

When Hearst Tower opened last May under a rolling migration plan, about 200 employees moved in each week. In October, the Phase II opening was held as the executives came on board. At that point, the 44th floor executive dining room and conference center were officially inaugurated with appropriate fanfare.

Plating up ‘philosophy’: Today, participation at the 350-seat Cafe57 stands at approximately 55%, with about 600 covers at breakfast and over 1,000 at lunch. Catering business is substantial, thanks in part to an on-line ordering system that Sajda helped develop. It allows her department to quickly update menus and track orders.

“The thing that really sets Hearst apart from other cafes is that we’re really incorporating the Hearst philosophy—green, organic, wellness—into the menu,” Sajda points out. “We have B•Well days once a month when our in-house nutritionist, fitness center manager, Wellness Center nurse and café marketing manager come to the café to talk fitness, food, nutrition and wellness. A recent topic was Spring Into Healthful Eating. B•Well items are tagged with a B•Well logo, but every station offers some healthy alternatives. And we try to have at least 10 organic items each day at our salad bar.”

In an effort to keep things interesting, the Hearst location has its own on-site marketing manager, an RA employee who reports to Sajda.

“I basically spearhead initiatives that she helps to execute,” Sajda explains. “She lines up guest chefs and sets up monthly food specials. We offer at least one daily recipe item on the menu from a Hearst magazine. Guests love to see CosmoGirl Cupcakes and Country Living Mac & Cheese. We’re also introducing an interactive Culinary Series for Hearst employees.”

Much that she’s experienced in various positions and locations since joining RA has shaped the self-assured, can-do woman Sajda is today.

“When I started as café manager at Bertlesmann, I knew I loved catering,” she says. “Following eight months as café manager, I held the position of catering manager for the next 10 months. Since the beginning, Charles LaMonica, senior vice president of operations, has been my mentor. He sent me on to serve as catering director at the New York University Torch Club, the on-campus faculty venue, a brand new facility at the time. After a year, the director left and Charles approached me and asked: ‘How about being director here?’ It was a little jewel of a unit, serving professors and handling NYU events. So I was there for a year and a half as director.”

With the 2002 Salt Lake City Winter Olympics looming, LaMonica again sought Sajda out. In charge of all the foodservice for the Olympic curling events, she spent the entire month in an auxiliary venue in Ogden, Utah, about 40 miles from Salt Lake City. “We fed the athletes plus hundreds of guests and staff,” Sajda recalls. “Curling is the only sport where you have three indoor competitions each day. For us, it was 30 days of intense events, from start-up, events and breakdown, although the actual Olympics is two weeks in duration. We had no kitchen, only one concession stand where we had to set up ovens. It was a team environment; we needed to pull together.”

A P&L challenge: While at the Olympics, Sajda got a call from RA vice president Mark Romano, offering her the position of foodservice director at the CUNY (City College of New York) Graduate Center. “I’d spent two years at NYU and I’d done my thing,” she recalls thinking. “I get an itch to do the next thing. CUNY was special since it was a P&L account. The challenge was to increase catering and turn a profit. I needed to come in and keep the momentum going.”

During the two years that Sajda was there, the very hands-on nature of the experience in this older facility, budget restrictions faced by various campus departments, and the resultant need to work closely with clients in order to make them happy with an event that could be produced within their budget, have all served her in good stead.

High profile assignment: When the Time Warner Center in midtown Manhattan was under construction, Sajda saw the perfect challenge to make something happen in a high-profile location. Although she’d not yet done an opening, she was unfazed when LaMonica once again called upon her. “I love forming the relationships with clients, seeing it all come together, then moving on to the next [challenge],” she confides. “The expectation [at Time Warner] was very high and there was awesome catering. I was very much involved in creating the catering program over there. In corporate catering, we’re dealing with the same clients; we’re the in-house caterer and have to gain their trust that we’re working for them and with them. Every client is different and success lies in being able to gauge your client’s wants and needs.”

At Time Warner, Sajda worked closely with the vice president of corporate events, and soon they could “speak without speaking,” so well did she grasp the v.p.’s mission and vision. There she was given the creative license to try new things in a venue with diverse events including screenings for George Clooney and sales meeting/dinners for In-Style magazine.

Double the ‘fun’: One year into the job, RA gave Sajda the heads up that there was the possibility it would also win the account for Time Warner’s conference center. Then, in January 2006, RA was awarded the foodservice contract at Hearst—and she was soon invited on board as director. “I was involved in the RFP process. In late February, we started having meetings with the client and I took on the whole opening at Hearst.”

In fact, May 15, 2006 was opening day for both the Time Warner Conference Center (within the Time Warner building) and the Hearst Tower, so Sajda went back and forth between the two locations that day.

“I’d heard so much about the Hearst project and its being a green building [subsequently the first Gold LEED-certified office building in New York; see p. 24, FSD, February 15, 2007]. Being at Time Warner, the only place [more challenging] I could see myself going was to Hearst. I knew their philosophy was ‘to be the best.’ I decided to take everything I’d learned by opening Time Warner when Charles asked me to open Hearst.”

Skill set: Through the years, Sajda has honed her multi-tasking, prioritizing and time management skills and sometimes even amazes herself by how much she can accomplish in a given time period. She’s learned to delegate to some degree, but admits she’s been told she’s “a control freak,” a trait that obviously works to the client’s advantage. “I need to know the [client’s] expectation level will be met and I need to have everyone on the same page,” she says. “In the beginning, when we were hiring and training, I explained that everyone here is special and has something special to offer—that’s the expectation of the Hearst management.”

Being put on the spot is exactly where Sajda likes to be. She learned at Time Warner—with a fair amount of diplomatic guidance from LaMonica—and again at Hearst, that when you’re dealing with construction and “a lot of moving parts,” not everything is going to go the way you want it.

“I need to make decisions as things are happening; as a leader in the opening, I need to have confidence, to be strong and make a decision,” she asserts. “There are always a million people hitting you and I love that. I thrive on that.”

Time to reflect: Taking a holiday herself is sometimes hard to schedule but, single and living across the river in Hoboken, NJ, Sajda’s now trying very hard not to work weekends. “Could I have more time to read the paper and relax? Yes, but I choose to do this,” she laughs. “My refrigerator is basically empty but on the weekend I’ll hit a nice restaurant. I love good food and wine and spending time with family and friends. My passion for catering increases every day. This year, RA named me Catering Director of the Year and I’m so proud of that honor. Having been with them for 10 years, it’s time to reflect on my career. These two projects [Time Warner and Hearst] have been very special to me. As for the future, anything is possible.”