Some say, "You can't go home again," but Julie Hanrahan, foodservice director at St. Thomas More School in Oakdale, Conn., knows that's certainly not so in her case. Hanrahan and her 12 siblings grew up on the idyllic, 100-acre campus situated on the shores of Gardener's Lake after their father founded the school in 1962. She never expected to return when she graduated from high school and left home at the age of 17 to forge a career in the restaurant industry. For the next 15 years she worked primarily in upstate New York restaurants, principally in the Hyde Park area where she honed her skills working side by side with several Culinary Institute of America (CIA) trained chefs. 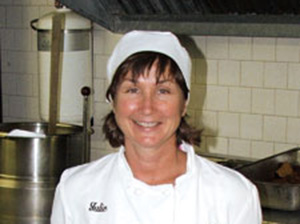 Nine years ago, the headmaster at St. Thomas More asked her to help out in foodservice, if only for 12 hours a week, since the cook in charge of the program was ailing. Soon it turned into a full-time job and Hanrahan became the dining services manager, overseeing meal service for the 200 students in residence plus faculty, staff and families.

Getting to work: She immediately tackled the tasks of improving sanitation standards and moving the menu from "institutional" to restaurant quality. But other changes lay in wait. "Not too long afterwards, the headmaster wanted a contract management company," Hanrahan recalls. "I was less than enthusiastic then, but now I call myself 'Ms. Corporate.'"

The contractor was Flik Inter-national, the division of Compass Group whose private schools unit operates under the name Flik Independent Schools by Chartwells. "I became the client and their employee was brought in to manage," Hanrahan explains. "Within two years, and a couple of changes in managers, Flik offered to hire me as foodservice director. Overall, it gave me a great opportunity to receive a lot of management training and has allowed the foodservice to grow."

In addressing the needs of the all-male students, growing the foodservice is all about improving quality and providing choices in a program that is totally customer satisfaction-driven. "My job is to keep the quality high within the budget," she asserts.

"Reducing the numbers is not the headmaster's motivation, and customer satisfaction has gone way up. We have 'report cards' out on the front line every day. Sometimes I go around myself and pass them out, so there's constant feedback. I actually have to beg people to come to the monthly food committee meetings that are open to everyone. We put up flyers and I go around that day to encourage them to come, but they don't have any real issues or requests."

A 1999 remodel of the dining room eliminated both the old steam table and the resultant long waiting line out the door. In its place is the contractor's Profiles program, offering students six stations or bars to choose from, including: pizza, deli, specials (hot or cold), yogurt/fruit/dessert, soup and bread, and a salad bar, plus two identical beverage stations instead of only one.

A "natural" fit: But Hanrahan's imprint on the operation is unmistakable. "Initially, when I took over and it was self-op, I moved the menu from institutional to scratch-cooking with an upscale menu," Hanrahan explains. "We only use canola, olive or sesame oil and we try not to have processed or frozen foods. Turkey and roast beef are cooked in-house, then sliced at the deli station. Muffins, bread and desserts are usually from-scratch, as well. So when Flik came in, it wasn't just me making this policy; their policy was thoroughly in line with mine."

Hanrahan's basic program, incorporating many of her own restaurant recipes for meatballs, dressings, marinara and Bolognaise sauces, for example, has been influenced by numerous Flik programs, including Food Focus and Slow Cuisine. "The Food Focus on the cuisine of various cultures, such as Brazilian with its churrasco barbecue, Mediterranean, Indian or Korean, allows me to learn," she asserts.

Of the contractor, she says: "They give you the tools but how successful you are is related to how much you put into it to inspire the staff. Early on, when Compass hired other managers to do this job, I saw there were many programs they weren't doing. I go all out to use the tools they provide to carry out the programs because I see how well they work."

The contractor's Slow Cuisine program, with its focus on utilizing locally produced product, dovetails neatly with Hanrahan's mindset. "In a sense, it's going back to the old ways, yet it's very new and a current focus for foodservice," she says. "There's Semkow Farm in Old Lyme (Conn.) where I've gone to purchase their cheese, and I'll get Russian rye bread (it's famous) and hard rolls from a bakery in Colchester delivered daily to the deli bar."

Hanrahan creates many of the specialty desserts herself, based on a talent she began to hone when she was barely 20 years old and worked with a skilled pastry chef in a French restaurant in Kingston, N.Y.

She's a star: Hanrahan has used the contracto's Be A Star innovation recognition program in various ways in her operation and credits it as the driver behind many of her programs and management techniques. (She was one of two Flik Independent Schools foodservice directors named a Be A Star winner last year.)

The Culinary Garden, for example, is her home-grown idea, prompted by a Be A Star goal to create a community project. It also fits neatly into the Slow Cuisine focus on promoting the use of locally grown produce.

"Last year, my staff and I, with help from the grounds crew, created a large garden,"she explains. "This year we made it smaller and closer to the kitchen and we hope to get the students involved in tending it next year. It's actually two boxes, one for tomatoes and one for fresh herbs, plus edible flowers, all of which we incorporate into the menu."

"Now, the Flik management, including the district manager and regional vice president, want all units to do my Culinary Garden."

The Be A Star program has also provided her with continuing education tools for herself and her staff. "I listen to my employees and that helps to create loyal, dedicated workers who respect me because I respect them, we're tight like a family. The more I reach out, the more everyone benefits. My job is to inspire them."

Turnover has been basically non-existent during the past four years at St. Thomas More, a goal Hanrahan and her headmaster were eager to achieve. "We have 13 employees and I try to make sure we're properly staffed so jobs can be performed effectively," she says. "We pay our staff well, and meals are part of their employment package, since there are several casinos nearby that are always looking for staff."

Low turnover certainly saves the expense of training new employees, but of greater interest to Hanrahan is that a proper level of staffing increases the likelihood that sanitation measures will be carried out to her high standards. "I've taken all the required (sanitation) courses, but that's just the core of me: organized and clean," she asserts. "We're serving food to people and I take that seriously. I insist upon having a liquid hand sanitizer unit at the door to the cafeteria and now all the kids use it."

Sanitation maven: Above and beyond state-mandated health inspections, the school contracts for a quarterly sanitation inspection. "Each time the inspector visits, he raves," she says. "I've instituted a 360-degree turnaround here, the first few months, all I did was clean."

Setting an example for her staff and customers includes practicing good nutrition herself and following a healthy lifestyle, not to mention teaching aerobics throughout the week, including a Sunday class at the school."Foodservice and aerobics are great for me," she comments. "I get to do what I love to do."