Jim Beach, CCFP, who holds the correctional officer rank of major in the Orleans Parish Criminal Sheriff's Office in New Orleans and is its foodservice director, never planned on a career in foodservice. But fate "or Cupid" set him on that track some 23 years ago. 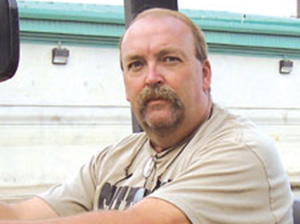 Now, as Beach and Mary Goodwin, MPH, LDN, RD, assistant director, along with a stalwart contingent of deputies deal with the destruction dealt by Hurricane Katrina to his facility, (an enclave of nine jails housing 7,000 inmates in a five-block area just down the street from the Louisiana Superdome) he's as upbeat and dedicated to his job as ever.

"I had worked for the A&P grocery chain, but they were going to transfer me out of New Orleans," he says. "Since I was dating someone, Angie, now my wife, and didn't want to relocate, I quit my job. But her father, who worked for the sheriff's office, told me I couldn't date his daughter if I didn't have a job, and since there was an opening in the office, he suggested I apply."

Thus Beach began his correctional career as a deputy on the piers, but two years later, the sheriff, recalling his A&P experience and equating it to "foodservice," assigned him to the kitchen. Following his predecessor's retirement three years later, he took over as foodservice director, the position he's held for the past 18 years.

During that time, the facility's inmate population has grown steadily from about 2,300 to its present (pre-Katrina) 7,000. Each day, seven days a week, 365 days a year, he and his staff of 45, along with about 90 inmates detailed to the kitchen, prepare more than 21,000 meals at a cost of $2.37 per inmate day, well within the department's $8 million budget.

Giving back: "We also prepare food, free of charge, for the elderly and for civic groups as requested," Beach says. "During the high school football season we do concession sales for the games and put the money back to help maintain the football fields. The sheriff's office adopted that project; it's another way for us to give back to the parish."

In the years since Beach took the helm, decreeing from the outset that cabbage, as per inmate requests, would no longer be served, he estimates that he and his team have reduced food costs by about one-third. In good measure, this has been effected by moving from a four- or five-week cycle menu to a six-week cycle. "With Mary Goodwin's help, (she's our dietitian as well as our warehouse directo) we are better able to forecast our food usage, making sure items are available, since they don't repeat as often," Beach explains.

"Through the bid system we can see what products we can get at the best prices. And, since Mary is the warehouse director, we're able to put out our own bids vs. having a purchasing department do it entirely. That all contributes to healthier menus and getting what we want."

Low-sodium standard: Meals are a lot healthier today than in years gone by, Beach asserts. At one time, it was"cook what you could find," but now, with a dietitian on staff, special-diet meal counts have been reduced by one-third to about 250 now, since the "basic fare" is low sodium. "When you cut down on sodium it cuts out a lot of special diets and that's a huge savings in man-hours and meal costs," he says.

"You don't have to keep stopping the wheel of production as often to prepare special diets. We provide every kind of diet, but we don't have that many aging inmates (with special dietary needs). We only hold inmates a couple of years, then send them on to the (state) Department of Corrections."

The psychology Beach applied to switching from whole milk to 1%, (which accounts for a savings of about $200,000 a year) still makes him chuckle when he thinks about it. Since he's a great milk drinker himself, and switched to 1% a few years ago, he realized a gradual change would not be noticeable to the inmates in terms of taste. But the color of a different container would be a give-away; so, he convinced the manufacturer to package first 2% milk, then the 1% product, in the same red container as the whole milk, and simply label it "milk." The switch went off without complaint, he recalls.

Since doing more with less is an ongoing objective, Beach regularly brainstorms with his nuclear staff including Captain Goodwin, Lieutenant Tyrone Sutherland, Corporal Tourland Levine and Field Officer Tyler Jones. Money- and labor-saving suggestions are always welcome. One of the best suggestions became a dream-come-true nine years ago when the two antiquated kitchens (always a challenge to keep clean) were scrapped for a brand new building to house a state-of-the-art central commissary.

Push to chill: "We're built as a cook-chill facility but we only do cook-serve," Beach points out. “I've been pushing to go to cook-chill which would cut costs by about one-fifth, but that's about a $2 million outlay, primarily for retherm ovens, trays and tray-sealing equipment. I have a good staff and I wouldn't lay anyone off, (if cook-chill eliminated their job) but they'd be able to work less hard than they do now."

Having inmate workers in the kitchen seems to make little difference to Beach as long as operational standards remain high. "I don't expect the kitchen to be clean, I demand it from my employees and from the inmates," he asserts. "They must wear clean uniforms when they come to work and wear different-color baseball caps to designate the work area they're assigned to. They must wear their hat with the peak forward, just as they would at a job in the real world. The sheriff's office uses the kitchen (among other areas) to ready inmates to go to our work-release facilities and jobs they get paid for."

Splitting time: Overall, about 90 inmates work in the kitchen on three split shifts, some arriving at midnight, others at 2 a.m. and the last group at 6 a.m. They're escorted to the kitchen to do their jobs, then back to their living quarters at the end of their shift. Inmates assigned to the kitchen live in a single building, dormitory-style. They can eat as much as they want during lunch when they're locked down in the inmate break room. "Room service" is provided for all other inmates (i.e., in-cell, lock-down), with the deputies assigned to the kitchen also responsible for delivering food to each of jails.

To help insure food safety, Beach empowers his staff as well as the inmate workers and makes it clear to all that nothing is to be sent out of the kitchen that they wouldn't serve to their own mothers. "I tell them to 'pull the chain and stop the train' if they think something is wrong with any ingredient," he says.

Over the past nine years, since the new commissary kitchen has been up and running, Beach's facility has never had even one health code violation, a record he works to sustain. "Instead of stars, the Public Health Department in Louisiana awards 'pelicans', from one to five, (five being best) and we are a five-pelican restaurant," he says. "I'm very proud of that but it has nothing to do with me. It's my staff and the policy and procedures that we have in place."