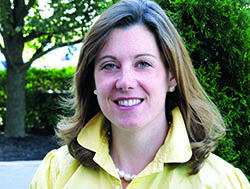 During a trying time for school foodservice, Jessica Shelly is nothing but excited, especially about the challenges. Shelly is the food services director at Cincinnati Public Schools, which in 1898 became the first large school district to offer meals through the National School Lunch program.

“We’re really making an impact. It’s palpable,” Shelly says. “You can see it in the kids when they come through the line and say, ‘I’m so glad you have radishes back on the salad bar today.’ That’s the kind of shift that we’re making here. It’s super exciting to be part of the ride.”

“Her energy and excitement are her greatest qualities,” says Eric Zacarias, operations manager for the food services department. “She has a real passion for what she does. She shares it with the staff and gets them energized for change.”

There has been a lot of change since Shelly became director in 2010. One of those changes, and the thing Shelly says she is most proud of, is getting a salad bar in every school at no cost to the district. Through grants, partnerships and donations, each of the district’s 55 schools now has a salad bar.

“When salad bars were first being talked about [they were] being seen in urban, affluent school districts,” Shelly says. “We were able to implement one in every school in one year. That’s been a real wonderful way for us to introduce our kids to a variety of fresh vegetables every day.”

Students at every level are offered an entrée, hot vegetable, two fruits, milk and a trip through the salad bar for lunch.

“When the new [USDA] regulations came out, it was so easy for us to implement [them] because we had every vegetable subgroup offered every day,” Shelly recalls. “We were able to keep so many of the hot vegetables our kids love on our menus without having to sacrifice them to make sure we met all the different vegetable subgroups.”

The salad bars have been so successful that Shelly attributes them to an increase in participation.

That sentiment is behind another one of Shelly’s new initiatives: Mentoring Mondays. If a faculty member eats a school lunch at the table with students, Shelly gives the adult that meal for free. The goal is to get students to see their role models eating a healthy school meal, which will encourage them to do the same. “Studies have shown that in urban school districts the biggest role model in a kid’s life is not the parent, it’s the teacher,” Shelly says. “We were looking for that influence and guidance that works so well in the classroom to work in the lunchroom.”

To further that educational experience, Shelly focused on customer service training. “I don’t call my workers lunchroom ladies. I call them lunchroom teachers,” she notes. “I think it’s infectious when your staff is proud of what they do and is confident in what they do. The kids then see how much pride they take in the service of their food. They realize that [the cafeteria workers] are doing this for them. It’s a connection.”

When it comes to high school participation, districts more often than not see a sharp decline from the levels at elementary schools. The same was true for Shelly—until two years ago.

One step Shelly and Zacarias took to bridge the gap was to install vending machines that distribute reimbursable breakfasts at the high schools. The students often didn’t eat breakfast at school, either because of the lack of time or because it wasn’t the “cool” thing to do. By bringing the meals out of the cafeteria more students had access to  school breakfast. Two years ago breakfast participation at the high schools was 14%. Since installing the vending machines, that number has risen to 33%.

“We didn’t change anything besides the fact that we began offering breakfast at different locations through a technology that students were used to having,” Shelly says.

After taking on breakfast, Shelly’s team turned to lunch. Shelly believes students should want to buy school lunch instead of feeling like it is something they have to do. “I think sometimes our lunchrooms didn’t always portray the welcome sign,” she explains.

The cafeterias weren’t the only things that received a face-lift. The menu also got a revamp. “We tried to create restaurant-style menu items but make them nutritious,” Shelly says. One example is a Cincinnati classic: the Cincinnati Three-way, which Shelly describes as “spaghetti with chili gravy water and shredded cheese on top. It’s gross, but the kids love it.” By using whole-grain pasta and reduced fat cheese and chili, Shelly was able to re-create the entrée for a school meal that meets USDA regulations.

Another student favorite that received a healthy upgrade this year is the cheeseburger. Because of the USDA protein regulations, Shelly says her students were complaining about the small size of the patty. So Shelly worked with a manufacturer to produce a burger that has one-eighth of a cup of mushrooms in the patty. The result is a bigger, juicier patty. The patty also has less fat and calories so Shelly is able to add two slices of turkey bacon to the burger. “The kids are beyond excited,” she says.

Shelly also used the burgers to encourage high school students to visit her salad bars. By offering toppings such as jalapeño slices, banana peppers and red onion slices, Shelly was able to get more traffic at her bars. “What I’m having now are high school kids who weren’t too crazy about my salad bar coming over to the salad bar to get toppings for their burger or nachos, and they are pausing and stopping and getting some broccoli and mini carrots because they are there,” she says.

Another traffic builder at the salad bars is a new concept called Flavor Stations. “We’ve taken so many steps to reduce the sodium in our schools, but we were worried about compromising taste,” Shelly says. “We’re creating a Flavor Station where we’re putting out lemon pepper, cayenne seasoning, parsley flakes and red pepper flakes so the kids can season things themselves. They can create whatever they want in terms of flavor palate for that vegetable, so the sodium loss isn’t noticed as much because they are creating a new flavor. I’m putting that on my salad bar to try to pull them over. If you’re adding flavor to your steamed broccoli, why don’t you go ahead and put some carrots on that? Instead of us telling them you should make this, we are allowing them to make something fun and different. They can be the cooks.”

All these initiatives have helped the food services department stay in the black, even during a year that was tumultuous for other child nutrition programs. Shelly actually saw an increase in participation at her elementary schools. A revenue increase of 6%, coupled with a 5% decline in expenses equated to a $2.7 million profit last year for Shelly’s department.

That’s not too shabby for someone who’s only been in child nutrition for nine years, the past three as director, Zacarias says.

“When Jessica got on board to be director, we were able to make a lot of changes quickly,” he says. “She is a very forward-thinking person. She was able to make some very quick turnarounds and bring our department up to speed.”