Jeffrey Vickers, director of food and support services for the Contra Costa (Calif.) Sheriff's Department, set up meal service packed with menu variety for prison and county employees; reduced food waste by 5% using a modified cook-chill system; switched to a tray-sealing system for inmates' meals; and increased commissary sales by 15% with a Web-based ordering system for the friends and relatives of inmates.
—FSD of the Month, May 2006 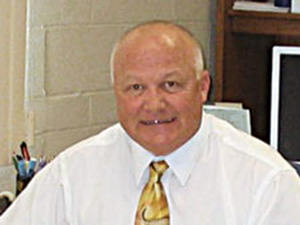 Feeding 2,000 inmates three meals a day is a far cry from owning your own restaurant. But in 1987, when Jeffrey Vickers realized his own eatery wasn't generating enough income to support his wife and growing family, it was the best option he could find.

Now, looking back over a 19-year career, he wouldn't have had it any other way, and early retirement is not an option he's considering since he still has plans to improve his department's bottom line in the future.

Vickers is director of food and support services for the Contra Costa Sheriff's Department in Richmond, Calif., a position he competed with 32 other contenders to attain about nine years ago. At that time, his foodservice experience included positions with Saga and Marriott, as well as in operating his own fledgling restaurant.

At Contra Costa, Vickers has created an operation in which staff members are no longer fed like inmates and inmates' meals are now served in a way that eliminates potential tampering. Meanwhile, he has morphed an ancillary commissary operation into a Web-based source of $600,000 annually.

The department consists of three detention centers spread throughout Contra Costa County, which is 30 miles northeast of San Francisco. Each detention center, Martinez, West County and Marsh Creek, has its own dining room to serve staff, including doctors, nurses, psychologists, deputies, janitors, etc.

Boosting morale: Vickers, after joining the department, quickly discovered that staff were being served the same exact food as inmates, and sought to change that. "They were unhappy and morale was terrible," he recalls. "I suggested such improvements as setting up salad bars, serving fresh soup each day and installing a popcorn machine and a cappuccino machine."

In fact, all of his suggestions were implemented, even a freezer stocked with ice cream novelties. "The staff loved us and to this day the program stands out," he says. "People try to come here from other [county] departments for lunch. We do a $15 monthly payroll deduction and that goes to cover some costs. If someone signs up for the meal plan, they can come here as long as they're a county employee. We even have a courtyard off the dining room in the West County Detention Facility, which opened in 1991. We bought a barbecue grill and now we serve grilled items out there May through October."

Breakfast is self-serve continental fare; lunch is a blue-plate special of the day, perhaps southern fried chicken, garlic mashed potatoes with cream gravy and whole kernel corn with strawberry shortcake for dessert. A scratch-made soup of the day plus 22 additional options are available at the salad bar including sliced fresh fruit; an abundance of whole fruit is accessible 24 hours a day.

Dinner is identical to lunch since it serves different people on the evening shift. For the 3 a.m. "graveyard" shift, grab-and-go items are available from a reach-in cooler located in the dining room, along with cold cuts, bread, yogurt and an assortment of frozen meals.

"The total subsidy for staff meals is $125,000," Vickers points out, "but people are not allowed to leave the building until their shift is over, and working in corrections can be depressing and stressful." Approximately 400 staff meals are served each day at an average meal cost of $2.50. Overall, staff morale has gone way up and people are now "easier to manage," he reports.

A centralized plan: Vickers' efforts to improve inmate feeding coincided with these efforts. Meal volume across the three detention centers is approximately 2.2 million per year.

In 1987, each facility had its own menu. Almost immediately, he created one master menu and consolidated production in one kitchen. When the third jail, West County, came on line in 1991, its kitchen became the central production area.

In this modified cook-chill operation, the majority of foods are cooked, then blast-chilled and sealed in a three-compartment disposable tray made from recycled milk cartons. Meals are sealed with film over the top and refrigerated until time of service. Gravies, mashed potatoes, rice and spaghetti sauce are cooked, then pumped into bags and kept chilled until needed.

All lunch and dinner meals are prepared in the central production kitchens, then shipped to the other two jails Mondays, Wednesdays and Fridays, two days worth each time and three on Fridays. Inmates are remanded to pods, and meals are rethermed at the point of service in each pod.

Once Vickers secured a grant to purchase a delivery truck and determined who would make deliveries, he had effected [as he had expected] some substantial savings. But one major "customer satisfaction" improvement caught him by surprise.

"Seal" of approval: But what was totally unexpected, he continues, was the inmates' reaction to the changes, which they perceived in their meals. "They loved it," he says. "I was on a module on the first day of service to quell any problems. If you're there and responsive, you can solve a problem immediately. They loved it because the plastic film over the meal meant that nobody had [tampered] with it."  By "nobody," Vickers means inmate workers who conduct the retherming, potentially someone that, to any given inmate, could be an enemy or member of a rival gang.

Costs related to the disposable tray system (which Vickers refers to as his Seal-A-Meal program) eat up most of the 5% savings; it runs about 14¢ a piece for trays and film, although the machinery and maintenance come free with the program, an important cost savings for correctional facilities, Vickers notes. Overall, meal cost per inmate day is approximately $3.15 to $3.20.

Web-based commissary: With Seal-A-Meal in place, Vickers turned his attention to the inmate commissary operation. Under the Sheriff's Department's auspices, the business of selling candies, toiletries and other supplies to inmates was a $1 million business in 1997. But since the department wasn't charging inmates enough to cover costs, it was losing money.

Vickers believed that outsourcing commissary operations was the solution and asked to be in charge of putting out the RFP and supervising the change over. "It's become a $1.6 million business and we earn a 40% commission on that, so now we're receiving $600,000 annually," he says proudly. "To us, it's peripheral business, but we wanted it to be a money maker."

The commissary's Web site launched last September; now, inmates and their relatives and friends can order on-line, whereas in the past, only inmates could place orders, once a week after filling out a paper order form (which they can still do). "The contractor created the Web site, and we've increased off-site sales by 15%, thanks to the natural growth of the program over the past 10 years," Vickers says.

Purchase ease: "All of the correctional contractors are competing for commissary sales, but we were the first to develop this Web site," he continues. "I was instrumental in developing the concept and its implementation, and I think it will be huge in the industry. Now, friends and relatives can send gifts to inmates. Since we're earning a commission, the easier it is to make a purchase, the better. They just click on the Web site [www.mycarepack.com ], then indicate the name of the facility and inmate for whom they wish to make their purchase."

The annual commission of $600,000 goes to the Inmate Welfare Fund, administered by the Sheriff's Dept. "All programs must in some way benefit the general welfare of the inmate and we fund 50% of each of the programs," Vickers points out. Currently, funds are spent on GED courses, landscaping and other vocations.

The Web site also allows family members and friends to make deposits to inmates' accounts, eliminating the need for them to visit the jails to do it and for department personnel to wait on them (though some deposits are still made that way). "Now," Vickers says, "we use the same Web site and accept ATM and credit cards only, when making a deposit. We've reduced on-site deposit activity by about 50%."

Currently, Vickers' department has 12 authorized positions in foodservice, but four are vacant. He's now thinking out-of-the-box in order to improve recruitment. "I want [the prison administration] to go to continuous open testing so people can walk in anytime and be tested, versus giving the test only once a year," he states. "“It would change the way we do business."

Seeking revenue: He also has his sights set on generating more revenue. "We feed the county-run homeless shelters on a contract with the Health Department," he says. "Providing one meal a day with our Seal-A-Meal program, we generate about $35,000 to $40,000 annually. I'd like to provide the same foodservice to the juvenile facilities. I'm trying to get the county to study it."