“Over the 20 years I’ve been doing this, no two days have ever been exactly alike,” says Jamal Hazzan, director of food services at the Klein Independent School District in Klein, Texas. “Each day brings a new challenge.” 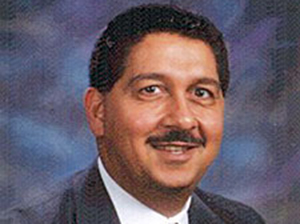 A diverse range of successful initiatives has characterized Hazzan’s tenure at the 37-campus, 42,000 student district. In his 12 years at Klein, he has upgraded all of the schools’ equipment and technology; revamped menu, training and quality control strategies, and taken more control over purchasing and vending operations.

Today, departmental income has increased from $5.4 million in 1995 to over $13 million, and participation is up 5% above student population increases—a testament to his efforts.

The tech expert: Prior to his position at Klein, a suburb of Houston, Hazzan was equipment and safety director at the nearby Alpine Independent School District, a role that made him an expert on technology issues. When he arrived at Klein in 1995, he immediately put his specialty to use. “I found a lot of challenges, and most were technology-related,” he says. “For example, when I started [in July] we didn’t even have cash registers—we were using cigar boxes. By January, we had registers in every school, and we still use that system today.”

All registers are networked with the schools’ central office—a cutting-edge feature when it was implemented—and sales figures are downloaded each night. Hazzan also quickly employed a computerized inventory and ordering system, through which kitchen managers transmit grocery orders to the central office, where they are reviewed and then sent to vendors.

“These were my first projects at Klein, and they really helped make things easier and more organized,” says Hazzan. “My philosophy on technology is that it has to add value to the operation. I do a lot of research to gauge the benefits and costs of any new system, and I will never introduce something simply because it is available.”

Hazzan recently introduced a biometric time-keeping system (employees are identified through fingerprints) that was soon adapted by all auxiliary departments in the schools. “Managers can easily see who is shorthanded, and they can react instantly, sending emails for substitutes,” he explains. 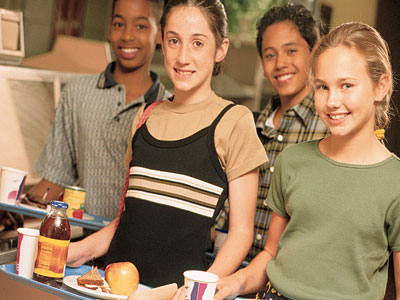 The innovation that Hazzan is most proud of is a new freezer and cooler monitoring system that will be completed this year. The system monitors temperatures 24 hours a day, and sends emails and pages to supervisors if temperatures go outside acceptable ranges.

“We already implemented this in some schools, but this year we’ll rely on it 100%,” says Hazzan. “When you do it the old fashioned way, with a thermometer, it’s not always reliable. A cooler might go down Friday afternoon and we wouldn’t know about it until Monday, or there might be a temporary power outage that spoils the food. [With the new system,] we know instantly—and our employees don’t have to keep checking temps.”

Look to the private sector: A native of Long Island, N.Y., Hazzan received an economics degree from the University of Buffalo in 1981. After working for seven years as a manager for Burger King Corp., Hazzan moved to Houston to open his own cafeteria-style restaurant, which catered to local office workers. When the restaurant closed after a year and a half, Hazzan entered the school business at Alpine.

Today, he draws on his experiences in the private sector when planning menus. “Our customers—the students—are getting more savvy,” he says. “We try to copy what goes over well in ‘the real world,’ because we know that works.”

One real world-inspired success has been his Munchable Lunch Kits, a knock-off of Kraft’s Lunchable line. The kits vary from ham and cheese with crackers to pizza pitas to Smuckers Uncrustable Sandwiches, among others. Accompanying the entrée are sides, a dessert, milk and often a prize, like a pencil or eraser, all packed neatly into a portable kit. “I saw so many kids bring those Lunchables in; I thought, why not do it myself?” says Hazzan. Today they are one of the most popular lunch items in the elementary schools.

Although he believes that “pizza will always be number one for the students,” Hazzan recently cut pizza production from five days a week to three to free up the ovens for a new item—“make-your-own toasted hoagies,” inspired by Quiznos’ subs. Students select their own sandwich ingredients, then watch them toast in the oven. Hazzan has taken the customizable trend as far as possible, offering create-your-own wraps, baked potatoes and burritos. Other popular, private-sector inspired items include Greek chicken salads, chicken wings, paninis and fruit smoothies.

Hazzan works with two dietitians to ensure that menus meet federal regulations. Fryers were eliminated five years ago, almost three years before it was mandated by Texas law. Baked chips and 100% fruit ice-pops are two popular and healthful à la carte items. Because Klein’s free and reduced-price lunch population is only about 32%, Hazzan relies on à la carte sales for about 40% of the department’s income. He says that offering a diverse range of à la carte options is key to keeping participation levels up.

The variety in his menus and the proliferation of POS locations throughout the cafeteria—another Hazzan initiative—allow each high school to generate close to $1 million in annual revenue.

Cost cutting measures: Hazzan’s background in economics (he received his MBA in 2006 from Sam Houston State University) also has been put to good use at Klein. In his third year, he decided to outsource the school’s warehousing operation and realized an immediate savings of $150,000.

“Outsourcing just made more sense,” he explains. “First of all, I have no expertise in the warehouse business. Second, I didn’t see any cost savings when I ran up a spreadsheet. We used to have a warehouse supervisor, truck driver and secretary. We couldn’t generate enough savings through our purchases to cover those three salaries alone, not to mention the costs of the trucks and fuel.”

Hazzan also implemented a new purchasing strategy. He bids directly on all center-of-the-plate items—about 20% of his food purchases.

“Of course, all of the food eventually comes through our distributor, but I bid on the high-volume items directly with the manufacturer,” he explains. “It gives me a better price, but the biggest advantage is that I’m going to get the exact product, or brand, that I want.”

Starting an in-house catering business and taking over the district’s snack vending operations are other profit-boosting initiatives that Hazzan has overseen, with annual revenues of $150,000 and $350,000, respectively.

“I’m director of food services, so anything that involves food, I believe I should be able to provide,” he says.

Training and retaining: “When it comes to staffing, we’re no different than the fast food industry,” Hazzan notes. “Turnover is high, and the pay is close to minimum wage.” To counter this, he places a great emphasis on employee training and incentives.

“Each manager in each unit is responsible for training and cross-training their people. That’s what we really emphasize, because then if I’m shorthanded one employee, I can rely on another person. Once an employee is proficient in two different positions, we bump his or her pay up by 80 or 90 cents an hour. If they learn three positions, they move up the pay scale again. We tie these merits in with attendance and TASN (Texas Association For School Nutrition) coursework.”

Hazzan almost exclusively hires from within, asking supervisors to recommend exceptional staff members. New managers undergo an extensive training program, shadowing existing managers who excel in specific categories, like cooking or ordering. The prospective managers spend a week or more with each mentor. “We’re willing to invest in them to get the quality we’re looking for,” notes Hazzan.

Quality service is reinforced through four unannounced, in-depth assessments each year, focusing on service, cleanliness and food quality. Employees who excel are recognized in managers’ meetings and through an “employee of the year” ceremony. Hazzan also created a “spirit stick” program to build team morale while recognizing good service. Each month, one high-performing cafeteria is awarded custody of the “spirit stick,” which they decorate with personalized school elements and put on display.

Although new challenges pop up every day, Hazzan stays optimistic as he continues to look for the next innovation.

“I’ve never met anyone who said this industry is just okay,” he says. “It’s hard work, so you either love it or you hate it. Obviously, I love it.”