Out of the wild blue yonder and into the top foodservice administrator slot with the Colorado Department of Corrections (DOC), Dona Zavislan still marvels at the quirks of fate that landed her there almost 17 years ago. 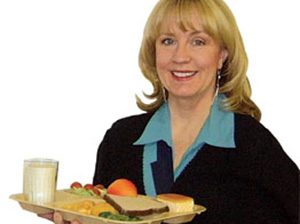 Born and raised in Colorado, she'd earned her bachelor's degree at Colorado State University, Fort Collins, in food science and nutrition, but really wanted to be a certified public accountant. Foot loose and fancy free following college graduation, she joined the U.S. Air Force, attended officer training school and saw four years of active service both stateside and in Guam before resigning with the rank of captain.

After a brief stint as quality assurance manager checking up on sandwich production being supplied by Walmart's main trucking company in Phoenix, AZ, Zavislan learned of a position overseeing foodservice for 15,000 offenders in 20 DOC facilities back home in Colorado. It was a job in which she could utilize her varied talents and broad-based expertise, while being back home.

After all these years on the job, Zavislan affirms that it's always interesting, although sometimes thankless. "It's a tremendous challenge because you're dealing with very tight budgets so you have to use a lot of creativity to improve things," she says."It's not the kind of field that's attractive to the average person, so in recruiting new staff we're always looking for ways to make them feel valuable."

Most DOC employees are lured by the department's good salaries, decent benefits and a good retirement plan. "They come, myself included, because they need the job," Zavislan notes. "But I'm convinced we need to do more in the way of training and we must give them the tools [including a clean, organized place to work with equipment that works] so they'll stick it out in this tough environment."

Tough environment: Albeit on rare occasions, that environment can become deadly, as it did in the fall of 2002. "One of our foodservice employees was killed in a close custody facility," Zavislan ruefully recalls. "An inmate worker assaulted our employee in the kitchen over the back of the head with a very heavy kettle ladle. While it was determined that this was an incident that was not in any way preventable or the fault of any DOC staff, my boss [one of our newest wardens] and I felt it was very important to visit all DOC facilities to connect with the staff and underscore our concern for their welfare. We also wound up installing a significant number of additional camera systems and tethering some large tools such as kettle ladles." 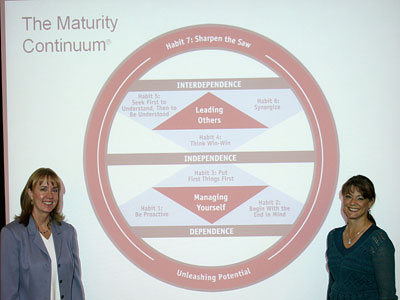 Sending a message: Zavislan heads up the department's foodservice and laundry central office with its administrative staff of six in Colorado Springs headquarters, and supports the foodservice staff of 256 paid employees as well as the laundry staff of 38.

More concretely, Zavislan has been steadily ramping up her efforts to mentor and educate staff so that increasing numbers can be considered for promotion. Recently, she and a colleague became certified to teach the FranklinCovey Seven Habits of Highly Effective People and The Seven Habits for Managers classes. To date, they have presented the "Managers" class to the foodservice and laundry program supervisors at one facility. "Those who have that aptitude, skill and desire could be future leaders of the department. My role is to motivate and encourage them to take the exams."

Of her own future promotion, Zavislan takes the long and patient view. As a single mom whose high school age daughter is just starting to drive, she's been happy, thus far, to stay close to home in Colorado Springs. Since she works in operations, a promotion could mean transferring to a prison facility. "Here at the central office, I'm able to get things done for foodservice. I'm often in facilities, on average three to four times a month, and it's a big state; some facilities are on the other side of the Rocky Mountains. We at central office exist to support the facilities."

"Special diet" solution: Using computers to manage religious and medical diets has been a huge factor in expediting that support while saving both money and labor. The first computer system put into place helps track and manage religious affiliation and diets.

"We're very proud of our kosher diet program and we've tried hard to reduce the cost," she says. "We actually get calls all the time from facilities in different states. For the past 10 years we've contracted for consulting services with The Scroll K out of Denver, a company that does kosher certification. They look at our menu and help us with training, especially before Passover. They go out to our units and make sure the food items are okay. We're serving kosher meals but not out of a kosher kitchen, so when we first started we were afraid to touch anything. Now, as far as possible, we're using products we already have. For example, all our peanut butter and tuna are kosher certified so everyone can eat it, and everyone gets the same cereal, milk and many canned fruits and vegetables."

The department also has a computerized medical diet system; all medical and religious diets are in the data base, including the halal diet. The system generates a list of which inmates have a tray to pick up. But when the department lost a lawsuit over its halal program, Zavislan and her staff had to do some quick rethinking. "For years we've been saying that since we have a vegetarian option, it is halal acceptable," she explains. "However, the offender successfully argued he had to partake of beef in his diet [it was a sincerely-held belief] or we should give him a [more costly] kosher diet. We went ahead and gave him a kosher diet but I couldn't possibly do that for 1,000 Islamic offenders. [Currently, 400 inmates are served a kosher diet at an approximate annual cost of $1,500 per inmate more than the cost of a regular diet.] So we brainstormed. When Muslims go through the line and beef is on for that meal, we give them a special tray with a halal beef patty. We used our diet computer to print up the tickets only when beef is on the menu. They're served this patty even if we're serving roast beef to the general population. This made us realize we could make up special trays only when the meal is different. This is part of our new menu plan that goes into effect in May versus the current system where any time there's a special diet a complete menu is written for them."

Just the ticket: Under the new plan, diet tickets will print only when the tray is different from the regular menu. The system will also make up a list of who has a tray to pick up that day. Since special trays cannot be served to others, if these trays are not picked up the food is thrown out. The DOC estimates that approximately $360,000 annually is wasted in medical diet trays that aren't picked up. Zavislan believes the new system will save 75% of that cost by reducing food waste and save staff time in tray make up.

Also, come May, Colorado DOC offenders will be served larger and more frequent portions of fresh produce [both fruits and vegetables] while the portion size of some less expensive carbs, including white potatoes and white rice, will be decreased, all in the interest of better health. These efforts are expected to raise the raw food cost per meal by 1¢, bringing it up to 79.8¢ per meal. The increase is expected to be more than offset by a reduction in medical diet tray waste. Currently, the total cost per meal is 98¢ including food cost (79.8¢), supplies (9.4¢), repair and maintenance (6.1¢), equipment (2.8¢), and "other" (.004¢).

Diet accountability: In a bold move that is sure to be watched closely by other states, with the debut of the new menu in May Zavislan and her staff hope to eliminate the need for a special diabetic tray for the majority of those offenders with diabetes. This will be made possible by improving the general population menu and through education so that most offenders with diabetes can manage their disease on their own.

"We've also been increasing educational materials with posters explaining what carbs are," she says. "We took every item on our menu and noted the number of carbs. They're posted in the dining rooms and are available in binders in the libraries. Since we have a lot of offenders with diabetes, I've been promoting this idea of diabetes education for years. Now, we're having discussions with clinical services in regard to increasing education and offender accountability as opposed to just telling them to pick up a special tray"

Accounting for costs is a constant and Zavislan, like any savvy person on a budget, aims to save a litatle each year. Now the "nest egg" is approaching $1 million. "It's almost a forced savings plan," she says, "so we have money for improvements or emergency equipment replacement."

About this time last year, one cost-cutting initiative actually resulted in a brouhaha that made the pages of USA Today. The department proposed to replace all ground beef with ground turkey. Since Colorado raises a lot of beef, that was not acceptable. As result of a compromise, half of the beef has been replaced with ground turkey, for an annual savings of at least $150,000. "During the last few years, we didn't get inflationary increases and this has helped us absorb that cost," Zavislan says. "Some other states reduced the amount of fresh fruit and vegetables [they serve], but we've worked hard not to compromise our menus."