Lucky is the person whose career affords them the opportunity to do exactly what they love doing, in the part of the country they like best, while surrounded by competent employees who also enjoy what they’re doing. 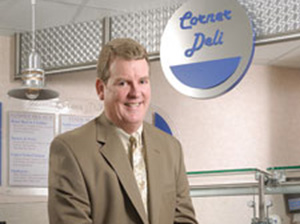 Maybe it’s a “rah, rah” college thing or perhaps just a happy confluence of talent and opportunity, but ever since David Friend, with a newly earned degree in special education in hand, decided almost 30 years ago to pursue foodservice management opportunities instead, he’s never regretted the decision. Now approaching his 50th birthday, Friend quietly but steadily has been earning the recognition of his peers for some of the unique programs he’s devised as director of dining services at West Virginia University (WVU) in Morgantown.

Building credentials: Friend was no stranger to foodservice, since both his grandfather and father operated restaurants in Virginia. He himself had worked both in the back and the front of the house during high school, and then waited tables throughout his college years. He says he was always happiest within the comfort zone of restaurants.

“After college, I accepted an offer from Howard Johnsons to be a food and beverage manager, which I did for five years,” he recalls.

Soon he began building his credentials in the college arena. His first stop was Christopher Newport College in Newport News, Va., where he worked for a year as catering manager before becoming director of dining services, a position he held for the next five years.

“Then I had the exciting opportunity to move to Lynchburg College and, in a sense, to go home since my wife and I are both from there. In fact, she was my high school sweetheart,” Friend says happily.

After 11 years at Lynchburg—10 of them as director of dining services, during which time he also earned a master’s degree in educational leadership—Friend was hired in 1999 as assistant director of catering and retail operations at WVU. Three years later he was named associate director and then, in July 2004, he assumed the mantle of director when the venerable Jeff DeMoss moved to the University of Kentucky as executive director of dining services. Friend was undaunted by the responsibilities involved in meeting the nutritional needs of 26,500 students (including about 5,500 on-campus residents) as well as approximately 5,300 faculty and staff—most of whom also expect showmanship and creativity in presentation—since he realized he was inheriting a first-class operation. “I was extremely fortunate in having a great leadership team of eight assistant directors plus 15 managers, approximately 200 FTEs, and 273 student employees,” he explains.

Thorough assessment: Although Friend is an accomplished downhill skier with a substantial adventure gene, he was not ready to hurl himself onto potentially slippery slopes without thoroughly assessing the conditions. “The first thing I did as director was to hire a consulting firm, Porter Worldwide out of Maryland, to do a market study including a Web-based survey of our customers, since I felt we needed an objective analysis from an outside group,” he recalls.

“We received 1,498 responses in a week, probably because we gave respondents a chance to win a free iPod. The firm also conducted 14 focus groups representing diverse campus sectors including various student contingents, faculty, staff, foodservice workers and dining services managers. Random intercept interviews were also conducted in several facilities. Through this whole process we learned that students wanted national brands. Therefore we brought in Burger King last year and also opened two ‘…We proudly brew Starbucks’ locations, and we are currently negotiating a third for the health science building. We also have a Freshens smoothie operation in a foodcourt and we’re finalizing a contract for a national sub sandwich concept.”

A master blueprint: As in any city, large or small, construction and renovation are ongoing and WVU is, in many respects, a small city. Thanks to Friend’s efforts, it’s now one with a master growth plan for dining services. Over the next five years, he will oversee 13 new operations or renovations including several on three regional campuses.

“Two of our regional campuses were turned into self-operated locations versus contract,” he explains. “The third was already self-op; we went into it to help out, but it has since come under our operations. Potomac State College in Kaiser, WV, transitioned under Jeff’s directorship. Two years later, we took over Jackson’s Mill Conference Center. Then, two years ago, we assisted West Virginia Tech, in Montgomery, to become self-operated. All revenues stay on-site, but we help with administration and procurement of food by letting them use our purchasing program. We’re also providing support and direction for those units. We don’t charge a thing since they’re regional campuses of our university and we want to increase their profitability.”

Now, Potomac State is building a residential dining facility as well as a retail outlet. Since it has become much more profitable, reserves the department has accrued are being used to cover the costs of the renovation. Jackson Mills is renovating a 300-seat dining room and adding new meeting rooms. West Virginia Tech plans to open a new food court in the fall of 2007. Friend is overseeing all three of these projects, while managing some renovations of his own. “This summer, we’re renovating Boreman Bistro from a traditional cafeteria to a food court,” Friend points out. “Production will be at each point of service so there’s interaction between production personnel and students. There will be demo cooking, a deli with items made to order, a Healthy ‘U’ station, plus soup and salad—all geared to provide healthy options.”

Healthy ‘U’ debut: As a matter of fact, creatively providing healthy options has earned national recognition for Friend and his department. Since West Virginia has the dubious honor of being ranked third in the nation among states with a high level of heart-related diseases, WVU’s president, Dr. David Hardesty, Jr., wanted a campus-wide wellness initiative to be created. Rising to the challenge, Friend and his staff developed the Healthy “U” program, which was a gold medal winner in the 2006 Loyal E. Horton Dining Awards from the National Association of College & University Food Services (NACUFS). More recently, Healthy “U” garnered a gold medal from Welcoa (Wellness Companies of America). It was eligible for competition since WVU has become a “Well Workplace.”

“The Healthy ‘U’ program has multiple components with wellness centers in each of the residential dining facilities,” Friend explains. “Right at the beginning, I hired our first full-time dietitian, Nettie Freshhour, two years ago. Each of the centers has a food pyramid displayed along with 12 brochures packed with specific information, plus a different 2,000-calorie diet sheet each day. Some participants don’t follow it rigidly for all three meals, but initially we thought about 50 people in each operation would take advantage but now there are at least 100 at each site. In Café Evansdale—our dining center for the largest residential facility—we’ve served as many as 500 when we menued raspberry chicken.”

Employee inclusion: The Healthy “U” program has also been geared to the needs of all dining services employees with components that combine walking activities (such as complete 100 miles in 100 days) with a chance to win a prize in a random drawing; funding health screenings with release time given by the department, and more.

Friend says revenue has increased 25%, from $16 million to $20 million, on the main campus alone. Part of that can be attributed to an increase in enrollment of about 500 students. But it’s also directly related to an increase in off-campus meal plan participation. “We [were selling] about 5,000 meal plans when I launched an aggressive campaign to increase participation [among] off-campus students,” he says. “Off-campus sales increased 96.4% for the ’05-’06 school year with a 230% further increase in ’06-’07. Prior to my becoming director, there was not a comprehensive program in place to sell off-campus meal plans.”

Friend says his true love—besides Nancy, his wife—is high-end special event catering, so he’s looking forward to the 2009 opening of a $25-million alumni center. “I see great potential growth for catering in addition to the more than 4,000 events each year that account for more than $1.3 million in annual sales today. A four- or five-course meal really allows you to show your creativity.”