Picture a professional synchronized swim team 1,800 members strong, executing their routines with great precision in 303 varied locations spread out over a 312-square-mile radius, and you'll have a quick snapshot of the operation in place in the Houston Independent School District. They're synchronized even at a distance from each other in this metaphoric pool of talent, but don't discount the impact of "waves" generated by 300 diverse building administrators, 210,000 students, plus highly vocal members of parent committees and PTA groups. Executive general manager Dave Richardson, with disarming nonchalance, is equal to the task of incentivizing his team to "swim" even smarter and harder in an effort to sustain and expand the cost-cutting and revenue achievements already made. 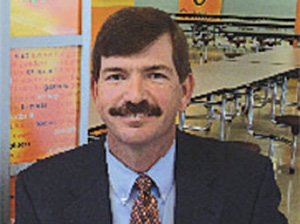 Back when Aramark won the contract to manage HISD foodservice in early 1997, district enrollment was 211, 211, and now, seven years later, there are just 1,000 fewer mouths to feed throughout the 286 schools, 25 charter schools, two pre-K centers, Head Start program and year-round camps (which serve the district's fifth graders during week-long programs from Sept. through May).

Each one of the school sites does its own food prep with a few of them satelliting meals to the charter schools, Head Start and the camps. All schools serve the same menu (different for K-6 vs. 7th-12th grades) on the same day. Richardson admits the biggest challenge to operating any large district is just sheer size.

On the same page: "Getting something done in a short time is difficult, but we've really reduced that amount of time needed to get 1,800 employees responding to quality and customer needs," he reports. "Over the past six or seven years, we've become very effective in cutting the time it takes for all locations to change menus, get staffing correct, and address customer service issues. It's gratifying to see the headway that's being made."

Case by case: Serving 247,000 meals-a-day and ensuring that the right recipes are being used and the correct portions served is an ongoing challenge. "You've got to be responsive to the people in each location and if you ask a manager, 'Why aren't you serving grapes as menued today?' you have to understand it when he replies, 'The kids are throwing them.'"

Overall, the "synchronized" team is running at lower cost and now foodservice actually has a three-month operating "surplus" on hand (allowed under USDA guidelines) of approx. $26 million that it hadn't had before. As result of effective cost management, the district has rolled lunch prices back as of the first of this month. All paid breakfast and lunch is reduced by 10¢; reduced price lunch is down by 20¢ so it will now be 20¢; and reduced breakfast, previously 30¢, is now 10¢.

To get each of the more than 300 managers synchronized, Richardson and his management team created a major incentive policy and has paid out approx. $500,000 to $600,000 annually to those who have earned it.

"Now, if their school came in on target, a front line manager could get $1,000 to $2,000 per year, a front line worker up to $500 per year, and a manager of multiple schools could receive $3,000 to $7,000. They're actually saving those food costs and payroll dollars by running more efficiently," he asserts.

As a 20-year Aramark veteran—primarily in the campus dining sector—Richardson realizes that students are basically creatures of habit. Therefore, he's especially careful not to eliminate menu items they really want, even if it would save money. However, his team of four chefs is always on the lookout for kid-pleasing products and cost-effective recipes. In fact, one certified executive chef primarily focuses on menu quality for the schools. So, while cost-per-meal is down, participation has increased to approx. 250,000 meals served per-day vs. about 160,000 meals prior to the 1997 contract.

Meal counts up 90,000: "That's an increase of more than 90,000 meals-per-day," he explains. "To get that, you improve food quality, presentation and customer service while making meals nutritious and acceptable.

"For example, we went to several of our vendors to try to reduce the fat in our pizza which was about 18 grams per serving. One created a 'Smart Pizza' with about 10 fat grams and met the challenge to keep the taste there. It was under development for about a year, then we tested it and now it's on our menu once a week—plus we're paying less than before.

"The appeal of the personal pan pizza, in addition to marketing it as a signature item, has led to increased volume so we can purchase at a better price in the process. Parents are also pleased that the department has done the research to reduce fat content."

Earlier this year, when Texas published its Food of Minimal Nutritional Value Guidelines setting forth the maximum fat content allowed per meal as well as the maximum package size of snacks, Richardson was pleased, but not surprised, to find his menus were well within the guidelines. Though the legislation has adversely impacted a la carte sales, he's confident those lost dollars will be made up by increasing breakfast sales in the classroom.

"The message is out to students to power-up for the day," he says. "We believe we'll get our breakfast sales up 5% over the previous year."

Seeking $1M in catering: Catering is also being targeted as an area ripe for growth this year, with revenues expected to top the $1 million mark. The atering operation now has its own chef, catering manager and six dedicated employees, as well as its own kitchen and six refrigerated and heated delivery vehicles.

On balance, HISD is so large (in fact it's the seventh largest school district in the nation) that foodservice is pretty much a self-sufficient program unto itself. But when the district administration came to Richardson seeking a long-term plan to make sure it stays on track, he immediately researched a plan, and, thinking "big" as most Texans do, cook-chill technology is at its core.

"Come March, we'll break ground for a 220,000-sq.-foot production/warehousing/distribution center that will be the biggest cook-chill facility in a school district," he reports. "It will include cook-chill/packaging/training and development as well as maintenance to support each area. For the past three years we've been around visiting cook-chill facilities across the country. We didn't want to go to a pre-plate but rather a very home cooked-type meal. Most items, like baked chicken, will be panned and shipped. We want to maintain the perception of quality, so it won't be like airplane food."

The facility is now in the design development stage, but Richardson expects it will be up and running by March or April 2006, with annual savings of approx. $5.8 million anticipated.

Currently, he operates a warehouse distribution center, but because of volume, goods are also stored in three or four rented locations. "The schools presently get deliveries from multiple vendors every day of the week, plus refrigerated and frozen product from HISD warehousing," he explains. "We'll continue to ship out hundreds of items such as pizza and chicken nuggets, but with the new centralized facility, sites will receive four deliveries per week and only from my vehicle."