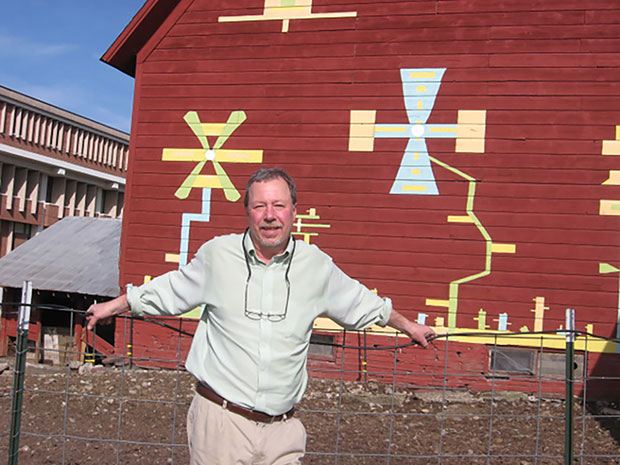 Sustainability is top of mind at many college campuses, but it’s deeply woven into the fabric of Green Mountain College’s mission. Located in bucolic southwestern Vermont, GMC’s curriculum was created with the goal of building community, economic and environmental sustainability. Its specific type of education even has its own name: environmental liberal arts, or ELA.

In 2003, the administration approached its vendor, Chartwells, with the desire to pioneer local and sustainable purchasing practices for GMC’s foodservice program. Just the right director would be needed to pull off these goals, recalls Greg Coady, executive vice president of operations for the Northwest region at Chartwells Higher Education Dining. That person was David Ondria. “Everything that he believes in the core of his being is exactly what this campus wants in a dining program,” Coady says. “Dave and Green Mountain belong together.”

“I think the first thing that struck me as so different with Dave in terms of being a foodservice director was the fact that he was just so passionate about food in ways I had never really quite seen in that realm,” says Philip Ackerman-Leist, director of GMC’s Farm & Food Project. “So not just as a culinarian, but also someone who is a hunter, an avid fisher and gatherer of mushrooms and various wild edibles. You’ve got this person who’s just crazy about food and who is willing to stretch boundaries.”

Ondria was thrilled to land in a setting where his interests—from ice fishing to pickling fiddlehead ferns foraged on campus—were appreciated. “I wanted to be able to take those interests and some way or another integrate them into what we do here,” he says. GMC’s foodservice department is small—managed by Ondria, a chef and Assistant Director Cindy Ondria, Ondria’s wife of 30 years. She also finishes Ondria’s sentences, chiming in with the particulars—a date, a year, a place—when he can’t quite put his finger on it. Being relatively small allows GMC’s foodservice operation the freedom to be nimble. “The whole dining program is a laboratory,” Ondria says. “It’s ever-changing.”

On the other hand, being small also means that those changes haven’t happened quickly—especially in the early days. Ondria says he literally was starting from scratch when it came to sourcing locally. “We do a lot of catered events and they wanted a local focus, but I [didn’t] know where to find this stuff,” he says. That meant trips to the grocery store to buy cheese commercially produced in Montpelier, Vt., for snack displays.

Putting every supplier through the paces to pass Chartwells’ safety requirements took time, Ondria says. “You  have to make sure that the people you’re buying from are doing things correctly and safely,” he says.

Frankly, he says, eating locally through the winter isn’t possible unless students relegate themselves to a diet exclusively of root vegetables. “I can get Canadian carrots and they’re still within 50 miles. I can get storage potatoes from a farmer in Vermont,” Ondria says. While delicate produce like greens can’t be found locally during the offseason, he is committed to sourcing organic product.

In addition to feeding students, Ondria also carves out time to educate them. “I feel like he is our fellow faculty member who happens to have another job that keeps him very busy,” says Eleanor Tison, associate professor of anthropology and sustainable agriculture at GMC.

Tison has partnered with Ondria for hands-on projects for her food preservation class, such as bringing students into the kitchen to make granola, salsa, pickles and applesauce that ultimately are served in the dining hall. “Whatever you want to do, Dave will work with you,” she says. “And in the process of working with you, he’ll tell you a few great stories, he’ll teach you a few lessons and he’ll be your lifelong friend.” Frequently, students working on projects for GMC’s capstone course, A Delicate Balance, also will end up at Ondria’s door. Past foodservice collaborations have included eliminating bottled water campuswide and introducing environmentally friendly reusable containers for a permanent carryout meal program.

Ondria also taught a three-credit course on animal proteins. “Rabbits, I think, were the first week. It built on that, and we went from goat to pigs to fish and ended with a half of steer,” he says. “At the end of the semester, we served it for a Christmas meal to the students.” Ondria won’t hesitate to take students into the field when the opportunity arises, a practice that helps them appreciate where their food comes from. “I was fortunate to shoot a male deer and get all the students to my house to help me process it,” he says.

At press time, Ondria was in the process of having GMC’s program recertified by the Green Restaurant Association, which takes into account everything from water efficiency to waste reduction. While there’s always another hurdle to jump, it’s clear that Ondria has succeeded in serving meals that appeal to students and faculty alike. “Our dining hall is all-you-can-eat; it has vegan, vegetarian as well as meat and a salad bar, a sandwich bar,” Tison says. “I go there when I take my family out to eat. It’s very well cooked, very high quality and, to me, it’s the best deal in a meal that I can get.”