In a kinder and gentler time, (1910 to be exact) the fraternal order of Freemasons established the Masonic Village in Elizabethtown, Pa., as a self-sufficient community. Today, the facility, set on 1,400 acres of orchards, cornfields and formal gardens about an hour-and-a-half drive from Philadelphia, is home to about 1,400 residents, including those in the healthcare facility, assisted-living area, residential apartments (without kitchens) and retirement homes (with kitchens), as well as 15 head of cattle. 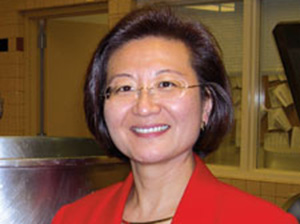 The chickens and pigs are gone, but the cows are a living reminder of the sustainable lifestyle pursued here in the heart of Pennsylvania Dutch country in days gone by.

As times have changed, the Masonic Village, now a continuous care retirement community (CCRC), has embraced modern technology including dietary management software as well as advanced meal production and delivery systems, in good measure thanks to the efforts of Daphne Gulick, senior director of food services, and her staff.

But the farm-to-table concept never went entirely out of style: Home-grown peaches and apples brim from baskets on the breakfast buffet in season; apple cider is produced on-site and sent off to be bottled and pasteurized (then sold locally or on the community's Web site); and fresh flowers, grown and arranged by the greenhouse crew, provide a riot of color within the various dining locations throughout the year.

Gulick's talent for adapting to her environment, her innate love of food and her team leadership skills have allowed her to seamlessly transition the dining services department into the 21st-century without losing sight of the human factor. Where others see challenges, Gulick sees opportunities.

Traveler: "I came to the United States from Fu-Jen University in Taiwan, where I was a home economics major specializing in quantity food prep, in order to earn my master's degree in institutional management at Texas Woman's University in Denton," she explains. "The love of food has always been in me. I'm a gourmet diner, I'm just very good in eating food, and playing with people's minds when it comes to food."

"At this moment in time, I look at myself as a weaver," she continues. "Artists have a vision, they weave it all together to get a result. People (my staff of 270 in Elizabethtown, 420 in all, including three other sites I oversee) are threads; I weave them together. Results are an everyday accumulation of effort and we can do everything we put our minds to."

Creating efficiencies: In 1987, three years prior to Gulick's arrival at the Masonic Village, the Omnibus Budget Reconciliation Act (OBRA), was the challenge that all long-term care facilities in the country had to address. She found her "new" 1910-era facility provided an abundance of opportunities, chief among them the need to be in compliance with all the new regulations under OBRA's Federal Nursing Home Reform Act, the first major revision of the federal standards for nursing care since the creation of Medicare and Medicaid in 1965.

Gulick was hired as foodservice manager in 1990, became director in 1993 (the same year the youngest of her three children was born) and was promoted to senior director in 2002. "Creating more efficiency was my task for many years," she says. "Previously, likes and dislikes were handwritten on a day-to-day, meal-to-meal basis, then that information had to be tallied and sent to the production kitchen several hundred yards away. Meals were shipped (at the time there were 450 of them) three times a day. It was like a giant catering operation."

Tech first: Today, Gulick quickly points out that she and her team don't do more with less, but rather "do more by being more efficient," using technology as their first approach. They've had ample practice over the past five years as Masonic Village acquired three additional locations, one near Pittsburgh and two in the Philadelphia area. Now some of the units share menus while retaining their own local touch. "We changed from hand-written meal tickets to dietary software in order to reduce human error," she notes. "Decisions are no longer made on the line since the ticket is printed out ahead."

Her responsibility is to continue to review their operations and bring in the Masonic Village systems for ultimate efficiency, thus avoiding the need to reinvent the wheel at each site. But no matter the degree of cost-cutting, Gulick has an agreement with her CEO that the savings get put back into the menu.

In 2000, Gulick implemented advanced meal production and delivery systems. "We love the technology," she asserts. "We've reduced 20 full-time equivalent positions on the production and delivery sides combined; that reduction of staff was the only way we could afford the system, and I believe the food quality is better than before. We still have to ship food, but we built the new production center, close to a $4 million project, attached to the largest customer facility and now ship 90% (of food used) to healthcare, 80% to residential living and 40% (mostly soups and sauces) to our retirement-living customers."

Cook-chill has been a dominant factor since 2000, with all foods coming out of the production center being chilled, conventional cooking is blast-chilled while other products are tumble-chilled. Fish, steak and sauteed items continue to be prepared on-site in traditional fashion. Now the center also ships cook-tank/tumble-chilled product once a week to one of the Philadelphia locations.

Culinary talent: More than six years prior to the implementation of cook-chill at Masonic Village, Gulick hired a culinary-trained executive chef to improve the quality of fare for healthcare residents of the nursing home as well as for those in residential living. There was already a chef on board handling operations that at the time included a cafe and one retirement-living dining room (there are now two) that serve the needs of independent residents.

Today, there are eight culinary-trained chefs on staff. One of them, a Johnson and Wales University graduate, spent about a year-and-a-half perfecting the facility's popular macaroni-and-cheese recipe.

Taking aim: In 2002, Masonic hired an independent firm to conduct resident satisfaction surveys and benchmark them with similar groups. Aiming to improve scores, Gulick and her team recently increased the number of five-week menu cycles from two to three. "We also made a 100% commitment to respond to our retirement-living residents," she reports.

"In the nursing home we are in indirect contact since nursing delivers the trays. We're partnering with our nursing department to increase communication with them."

"And, in other areas, we're very aggressively soliciting comments. We have a tremendous partnership with our residents: there's a food advisory council in retirement living, a food committee for residential, and a resident council in the nursing home and assisted-living. We also have three registered dietitians and two diet techs on the floor in the nursing home."

Gulick also implemented some new special-diet menus (gluten-free, no MSG and vegetarian) but is ambivalent about publicizing them. "We did this about six months ago because people really need it, but we don't advertise it," she admits. "We deliver what we promise, but we don't want to make the gluten-free too extreme because gluten is in so many foods. We're not using it as a marketing tool to attract others who have the need. It's a lot of work to check all the ingredient, you have to go all the way back to the manufacturer."

Going green: Favorite foods here include shepherd's pie, stuffed cabbage, prepared in the conventional way, then blast-chilled, meatloaf served with stewed tomatoes and "the best ever" mac-and-cheese. "In addition, today's residents are looking for more green vegetables so we're continuing to update menus according to the trend," Gulick says. "We also serve about 250 employees daily, offering the same entree that's menued for residents, plus sandwiches and salads."

To round out the foodservice picture, there's also a separate cae open to the public. Prices are a bit higher there in keeping with the more upscale fare, but Gulick has no desire to make it a destination restaurant since she aims to keep her focus on her CCRC clientele, and on her staff, whose annual turnover is 22%.

"They may sparkle individually, but we shine as a whole," she notes.