Two years ago, Damian Monticello joined an insurance firm as head of foodservice and undertook a task similar to that facing his peers around the B&I segment: eliminating a subsidy (in this case, $3.25 per person annually among a population of 8,000) and making the operation not only self-sufficient but profitable as well. 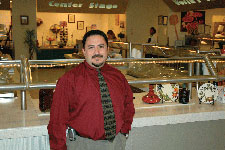 Since that time, he has steadily taken sales at Blue Cross and Blue Shield of Florida upward—from $2.2 million in 2002 to $2.7 million in 2003, and then to over $3 million last year—without increasing prices. Fresh food sales from vending have increased a whopping 145% per month while cafeteria participation this year is up a hefty 10,000 transactions (Feb. 2005 compared to Feb. 2004). Meanwhile, check averages have climbed an average of 10%.

Monticello, corporate food service liaison, brings to the job a degree in marketing and advertising, five years in food and beverage management with the Ritz Carlton hotels, as well as—most recently—a stint as general manager for Roadhouse Grill. In fact, working in the hotel and restaurant sectors and realizing he’d never be able to spend holidays with his wife and two young daughters, prompted his search for a job in the Monday-through-Friday (and holidays off) world of business-and-industry.

In a rut: “When I arrived, I saw there was a lot of established routine,” Monticello recalls. “Almost all contractors do cycle menus, but customers were in a rut and knew what would be here daily. Aramark has been the only foodservice provider here for about 20 years and that relationship helps us get along. Since I’ve [worked in] hotels and restaurants, I understand their staffing and food cost issues. But I realized we had a lot of ‘tools’ here we could use to get us out of the rut.”

The tools Monticello identified were used to implement several major marketing initiatives that would generate excitement in the dining environment for the numerous employees who had become used to viewing foodservice as a benefit rather than a service. But first he realized a total analysis of the operation was in order.

The overall foodservice program includes four employee cafeterias, three of which are in Jacksonville and serve 8,000 customers in all; one in Miami serves about 500. There are vending programs supporting 1,500 employees in 21 offices throughout the state. Monticello also oversees the operations of two c-store/gift shops in Jacksonville operated by a local Hallmark franchisee. Corporate Services Group is the primary vending contractor in Jacksonville while Canteen handles vending for southern Florida venues.

A ‘star’ is born: It was on the main corporate campus in Jacksonville, with a building population of about 4,700, that Monticello identified executive chef Christian Jendrasak as having major marketing potential. “For two years running,” he says, “Chef Christian won this district level competition, Aramark Culinary Excellence [or ACE] Challenge, and last year he was a bronze medal winner at the national level. We had the talent here, but customers didn’t know about it.”

To get the word out to employees, posters bear Jendrasak’s photo and copies of his award-winning recipes are free-for-the-taking at the registers. “We want Chef Christian to be walking around the servery at lunch and a lot of customers do know him by name,” Monticello notes. “I want his face to be the face of the operation.”

The ‘Y’ initiative: In a second marketing initiative, Monticello partnered foodservice with the management team of the in-house YMCA facility to create a “healthy item” once a week. About 26% of the population at the main campus are members of the YMCA and a newsletter focusing on healthy lifestyles goes only to them. Now, their management provides foodservice with a recipe to be menued once a month, plus copies are available at the register.

“Participation in the cafeterias increased over the last two years from 18% to about 30% due to those marketing programs,” he reports, “in combination with efforts to educate employees about the value of having their own ‘restaurant’ right here—even though there are 60 to 70 competing locations within driving distance.”

Now, to make the price advantage tangible, one item at each station is chosen every day and posted with the cafeteria price plus the price it sells for at a specific local restaurant. For example, a hot entrée such as Asiago crusted chicken breast with two sides and a roll sells for $4.85, while a similar dish at a nearby eatery is $7.99. Then, at the World’s Fare station featuring pizza and paninis, a Sicilian-style meat calzone is priced at $3.95 vs. $7.50 at a local pizzeria.

Subsidy in perspective: “Basically, we’ve managed to break even and seen record years for performance of the program without price increases—and that’s viewing the program as a whole including cafeterias, catering, vending and c-stores,” he explains. “The Aramark program on its own at our current pricing would be a subsidized account. But when you put the commissions from everything together as a whole, it’s breaking even and we’re satisfied.”

Of course, it is part of Monticello’s role to negotiate with outside vendors and he recently effected the switch to Corporate Services Group to manage vending for the Jacksonville operations. Previously, BCBSF owned the equipment, but he concedes it was “a very haphazard look.”

Now, with the vending contractor providing equipment, maintenance and stocking, there’s a more uniform, polished look. All glass-front beverage vending machines displaying a wide array of product have been installed along with new cold food machines stocked with fresh-made entrees such as Southwestern chicken with black beans and rice; whole turkey legs; burgers and an array of salads all prepared at Corporate Services Group’s commissary. Microwave ovens are available nearby for bringing hot entrees up to temperature.

Vending soars 145%: “We’ve seen a big increase in weekly vending sales, especially from the cold food machines,” Monticello says. “We did a sampling of items at each facility for a day, just to let employees see and taste what’s new.On average, fresh food sales have increased 145% per month. Now, we’re seeing vending sales of about $21,000 per week in the Jacksonville area.”

Meanwhile, the cafeteria continues to serve thousands more customers than it served during the same time period a year earlier. “I think the whole marketing effort got them in and once they were able to taste the food and see it’s not ‘cafeteria’ food, they were happy to keep coming back,” Monticello contends. “We’re making sure by using fresh ingredients. Our main thing was getting them in the door so they’d see the quality and the cost savings plus realizing they don’t need to find a parking spot when they return from eating out. In a way we’ve been a lucky recipient of the [tight] economy and the high cost of gas, but really getting the message out was a key factor in getting them in.”

Accepting credit: For an almost immediate check average increase, Monticello switched his enterprise from one that was “cash only” to “all major credit cards accepted.” Using the regular phone lines at the outset, 8% to 10% of sales were on credit cards, but the recent installation of a new point of sale system at all registers (still being installed at presstime) has already made a positive impact.

“Since the new system allows us to track the peak business cycles at 15-minute intervals, we know at what time we need more or less staffing so it allows us to manage the labor piece better,” he reports. “It also gives us sales information as to what is the highest selling or lowest selling item, so it’s another tool to help us manage food cost as well. But, perhaps above all, a high-speed Internet transaction is faster than using cash—and one of our big objectives is providing convenience especially since many employees only have 30 minutes for lunch. Now, with high-speed Internet access, we’re seeing about 15% to 17% of sales are done by credit cards.”

Refreshing catering: Catering presentation has also received some updating—or “refreshing,” in Aramark terms. “We established criteria of what certain set ups should look like and what type of platters should be used,” he says. “A catered function is a big thing for employees and we want to make sure it’s the best.”

Catering at the main campus accounts for a substantial part of annual revenues,  and Monticello expects to  transition to new software by June. This will enable customers to order via the intranet from on-line menus using a standardized ordering form.