Proponents of self-operated foodservice often find themselves in a do-or-die situation. Having convinced administration to either remain self-operated or convert from contract management, they are thus forced to back up their convictions with tangible, if not immediate, results. 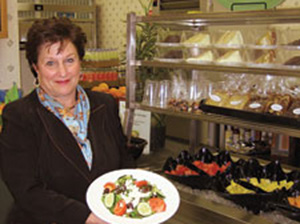 One such hospital foodservice professional is Betty Perez, RD, DHCFA, who played a large part in converting foodservice at the University of Medicine and Dentistry of New Jersey’s University Hospital to self-operation in the early 1990s—and never looked back.

Her formula is part script, part nuance. The script is familiar: grow retail sales, increase patient satisfaction and cut labor costs, among other things. Her challenge, though, was living up to the extremely high standards that hospital administration set for her.

Perez oversees a budget in excess of $9 million and generally returns a six-digit profit to the bottom line. She’s possessed of a contagious joy of life that’s always evident in the twinkle in her lively blue eyes and has a genuine love for people—not to mention a passion for food—that resonates with those around her.

Perez faces personal and professional challenges head-on, from taking her department self-op in 1993, to battling cancer in 1995 (when her two sons were eight and 11 years old), to absorbing a recent 20% department-wide staffing cut.

Perez is also adept at leading her staff of 101.5 full-time equivalent (FTE) employees to achieve the hospital-wide goal of providing 5 Star Customer Service to patients and staff alike, all the while encouraging them to improve their own skills in order to move up the career ladder.

“Flawless’ transition: She joined the department in 1982 as an assistant foodservice director, after a number of years at New York Hospital as administrative senior staff dietitian responsible for the main food production area. She had completed her bachelor in science degree in dietetics—a diversified program with a strong food management component—then served her dietetic internship at New York Hospital, where she was hired immediately for clinical and foodservice management responsibilities. But she soon focused on the facility’s main food production operation.

Taking her department at UMDNJ self-op was a turning point in Perez’ career. The success of her effort culminated with her promotion to director in May 1993. "Food and nutrition was outsourced from 1979 to December 31, 1992, and I was responsible for the coordination of all department functions for conversion to non-contract," she recalls.

More venues, more $$$: Over time, Perez has been able to grow retail sales at UMDNJ from about $1 million (during the 1980s) to more than $3.3 million today. The Gift Shop Emporium brings in an additional $300,000 each year, bringing total retail sales to $3.6 million annually. “We’ve added venues over the years—actually this main building opened in 1979 with one cafeteria,” she points out. “We added the carts, the restaurant and we’ve been very assertive in marketing our catering, which has accounted for $650,00 annually.”

The Cruising Café carts were implemented early in 2000. Although both medical and dental school buildings are connected to the hospital, the carts provide convenient pit-stops for students on-the-run. Combined carts sales now contribute about $1,200 per day without cannibalizing cafeteria transactions.

According to Perez, the job provides “a great engaging experience and learning opportunity every day, and the latest came knocking this past August with the mandated 20% staff reduction. “It’s a challenge considering that volume is rather constant,” she explains. “We serve approx. 1.7 million meals annually including 345,000 patient meals, 420,000 nourishments and 1 million non-patient meals—all while having to deliver outstanding patient service and satisfaction.”

There are now 100 FTEs in the food and nutrition services department plus 1.5 FTEs in the gift shop. Prior to the major organizational change—and for the past four years—Perez also managed the department of patient transport. Now that that job has been assigned to nursing, some of her time has been freed up—a blessing since she’s lost her executive chef as well as the campus retail services manager overseeing the seven retail venues.

Staff development: Although minus its executive chef, the department’s food production quality and standards have remained intact, Perez contends. “I strongly believe in staff development, so all of the culinarians are graduates of the “Destination 10’ program that chef Don Miller runs at his Culinary Academy in San Diego,” she explains.

“I had Don come on-site for a full week. Here, he could focus on the certification of our hot food production team. That was an exciting culinary experience for the department. I also have one Culinary Institute of America graduate and other cooks who are graduates of two-year culinary arts programs. Plus, once they’re on staff, we really look to develop them further. We have a very multi-cultural staff and whatever their passion is in food, we encourage it.”

Often that encouragement results in the development of a special event or promotion such as the recently held New Orleans Jazz Fest. “It’s a great way for their passions to be shared through promotions for the staff and patients,” Perez says. “One of our hot production culinarians loves food and jazz. He helped develop the menu and, since we love to provide entertainment, he played lead guitar with the jazz group that we hired. I’ve noticed that our patrons love to be totally engaged with the whole experience—they want to feel it, hear it and taste it!”

Patient promos, too: Even though the average patient stay is only five to six days, Perez has created a special selective promotion menu that changes on a monthly basis. This Patient Spirit Lifter program recently offered a “Cowcium” menu with the objective of promoting 3-A-Day consumption of calcium-containing foods such as milk, cheese and yogurt for stronger bones.

“We focused on snacks that were higher in calcium,” she says. ”We run this after the lunch meal since patients enjoy the extra attention and appreciate any treat you give them beyond their main three meals. We always try to take a unique twist on it and also use it as an educational opportunity.”

Patient satisfaction is, of course, key to the success of any healthcare foodservice operation. At UMDNJ, the meal delivery system is primarily cook-serve with a selective one-week cycle menu in place (see story above). But for heightened satisfaction, Perez introduced an in-room service trial program, Meals of Distinction, in 2004 on four patient care units including oncology, new moms, teenagers and a medical surgical unit.

Cashless benefit: Looking ahead, Perez aims to broaden the appeal of the in-house debit card, named Gold Card, that currently has about 700 users, and promote more widespread cashless retail sales to target a 20% sales increase. She’s “lobbying” to get a payroll deduction option for Gold Card carriers. Today, customers give the department money to load onto their cards while “earning” a 5% incentive for doing so.

As Perez and her department continue to make adjustments for the recent staff reduction, she’s developing a business plan for creating a new 1,500-square-foot retail concept to operate in the recently opened ambulatory care center. “Our own Café Express Gourmet-To-Go is probably a fit,” she says. “We have the talent to create our own brand and that keeps it exciting for our staff. We expect it will generate at least $300,000 a year, but we’d have to hire staff.”