Just two years ago this month, Allyn Graves became foodservice director for the school district where she’d been teaching high school culinary arts for the previous eight years. Since then, Nassau County School District (NCSD) in Fernandina Beach, Fla., has benefited not only from her culinary training and fresh eyes on its various programs, but also from her determination to bring herself—and, in turn, the district—rapidly up to speed on the management side of business. 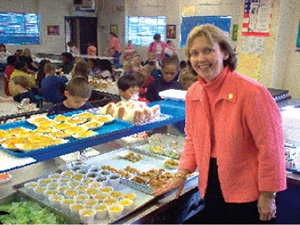 To date, she’s accrued an impressive record, most notably by more than doubling participation in reimbursable meals and by nearly doubling meals per labor hour (from 11.5 to 21.5). She’s also improved time and temperature monitoring, taken preventive measures in food handling and made an effort to reduce the back-of-the-house pressures of working short-handed.

NCSD currently serves about 11,000 students in 15 schools with about 20 feeding sites. A private school was added to the list this year, bringing the total to 16 schools that receive meals satellited from four central kitchens. Graves heads a staff of 15 managers and assistant managers, as well as 80 kitchen employees, a secretary and a foodservice specialist who conducts periodic evaluations of the schools.

Her search for qualified staff members is ongoing—but with an innovative twist. “We recently hired two full-time substitute workers and we need a few more,” Graves explains. “I have one school with 1,700 students that supplies the food for about 1,000 more students in four other schools. There’s a foodservice staff of 11 there and they run short-staffed very often. It’s an on-going balancing act, so having two subs has worked out really well. There are currently 10,000 housing permits out in this rapidly growing area and a new high school coming on in a year, so I expect we’ll be hiring a few more staff.”

Getting ahead: To tackle the business side of the operation, Graves attends conferences and enrolled in the University of Mississippi National School Foodservice Institute in Oxford for a week-long immersion course, adding this credential to her previously earned master’s degree in education. In addition, she was awarded School Food Service Nutrition Specialist certification by the School Nutrition Association, prior to completing her first year on the job. “I did the Ole Miss program at the end of my first year so I had enough knowledge to realize where I needed help. I feel I’ve been learning in layers,” she admits.

‘Free’ enticement: One of the first things she did was enhance students’ perceived value of school meals, which resulted in higher participation. “I came in and raised prices,” she states. “A sandwich went from $1 to $1.50 because I wanted the students to buy a reimbursable meal—the whole package. So now we offer ‘free’ side salad, vegetables, fruit, juice and milk—and they love that word ‘free.’ We advertise the bargain on posters all over the three high school campuses. In one high school, the number of students purchasing the reimbursable meal went from an average of 10% to 37%, plus our revenues are up 7% as well.”

In fact, a manager at one school reports that revenues through March were equal to the total for 2003-’04.
Promotions are another successful technique in boosting meal counts—for example, one for National School Breakfast Week (March 7-11) featured giveaways of bicycles and amusement park tickets. “We were aiming to call attention to healthy lifestyles by tying together elements of exercise and nutrition,” Graves points out. “We used monies from rebates to purchase nine bicycles plus we had 48 tickets donated by Summer Wave, the water park in south Georgia, for the middle and high schools. There was a good 16% increase in elementary participation that week. It’s too soon to know if it will stay up.”

Safely cooked: Addressing food safety, sanitation and consistency concerns, Graves is moving the district to using more pre-cooked meats. In fact, next year no raw meat, chicken or turkey will come in the door. “Our cooks will continue to make their own spaghetti sauce, lasagna and shepherd’s pie, but they’ll be using meat that comes to us from the purveyor already cooked and frozen,” she notes.

“This not only addresses sanitation concerns, but ensures that items will be uniformly delicious in every school. I try to keep raw food cost at about 40% to 45% of expenses.”

In the coming school year, Graves expects to implement some farm-to-table initiatives with local growers, and perhaps get some hands-on nutrition and food-prep experiences launched in elementary classrooms. Then, if she could add a blast-chiller to each of her four base kitchens, she could rest on her laurels—perhaps for an hour or two.