With downsizing plus the emphasis on healthy diets, vending programs are becoming more than snacks. 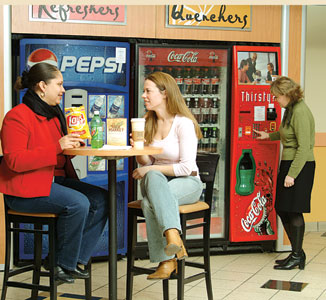 Vending is beginning to play a larger and more diverse role in noncommercial foodservice operations these days, as operators in various segments respond to such challenges as corporate downsizing and customers’ desire for higher quality, more healthful and/or ethnic offerings, and even more national brands.

“In many instances,” notes Tom Smith, senior vice president of business development for Sodexho Vending and Refreshment Services, “particularly in the B&I segment and in healthcare, in third-shift dining service operations where they’re not making it [financially], clients are asking us to come up with a vending solution.”

Smith, who sits on the board of the National Automatic Merchandising Association, adds that the most typical reasons for operators switching from traditional foodservice to a vending operation are because a company has reduced its work force or is tightening its purse strings. In such cases, vending is becoming a viable option because of the choices now available.

Typically, Smith points out, what the switch involves is bringing in either a cold-food merchandiser “or a frozen food option, which I like a lot better. When you go into a grocery store, where you used to have maybe one or two aisles of frozen product to choose from, today you’ve got seven or eight. You’ve also got every national brand, from Chili’s to Friday’s to Taco Bell, trying to get in front of your consumer at the retail level in the frozen food section.”

Pointing to one Eurest account that dates back to the days of the dot.com boom, Mugnani notes, “It’s a beautiful facility at which we have two cafes and one kiosk. Over time, the population was reduced by 25%, 50% then 75%. So here we had this state-of-the-art facility with all these serving points that really don’t look too good based on the product selection we could provide on a daily basis.”

So Eurest decided to increase the number of vending machines available, which mainly were snack and beverage machines. Over the last 12 months, the number of machines has been increased from 16 to 28, Mugnani says, including more glass-front units. As a result, the menu variety available in the machines at all hours is now comparable to that in the cafeteria. “As the program has changed in the cafeteria, we’ve further enhanced the vending to meet the needs of [employees in] evening or off hours.”

“What we ended up doing on our end was reducing our operating hours,” says Michael Coffey, regional director for Compass Group’s Canteen division for the greater Chicagoland area, “then we reduced service points. In doing that, we transitioned to these other machines with Canteen.” Revenue, Coffey adds, remained “somewhat static. If anything, I should have somewhat of a decrease in the café, but it became more efficient to run the operation, so it made more sense.”

In fact, total foodservice revenue at this account has risen by 5%. “When you take into consideration the population decline of between 15% and 20%, that’s a very positive trend,” Coffey notes.

National brands are enhancing vending’s menu mix. Coffey says he is having success selling products from Blimpie’s—a Canteen partner since 1998—and Tony Roma. Indeed, he contends, Canteen sells more Blimpie sub sandwiches than any other franchisee.

“We’re putting national branded products through our vending machines where you never had that before,” he says, adding that Canteen soon will bring in a third major brand.

When it comes to vending machines themselves, technology is “way out in front of the industry,” according to Smith.

“The vending machines themselves are so well built that if they’re maintained, and not in an area in which the elements get to them, they’ll last,” he explains. “There is no planned obsolescence.” As a result, however, vending companies are less motivated to pay for technological improvements. Still, Smith says, “a lot of real-time, remote monitoring technology” is waiting in the wings.

Healthy, ethnic: Wellness and nutrition are “becoming more and more a focus of vending, even outside of schools,” Smith reports. In the beverage and snack categories, he adds, the changing demographics in America have resulted in the introduction of a number of regional and ethnic beverages, such as Jarritos; made with fruit flavors and containing less carbonation than American soft drinks, it is the number one beverage in Mexico and among Hispanics in the U.S.

But healthy vending isn’t always what customers are looking for. A healthful snack-and-beverage vending program introduced at a major food company a year ago saw “good results initially,” according to Sodexho spokesperson Stacy Hade. “However, many consumers expressed their preference for indulgence options.” Sodexho eventually limited the number of healthful items to 20% to 30% of the total.

Vend Marketing Institute, LLC (VMI) is implementing a comprehensive nutrition guideline program for vending clients throughout the country. The program, named “The Right Choice… for a Healthier You!,” focuses on nutrition education, promoting an active lifestyle and making more nutritious choices available in vending machines.

In a similar vein the issue of childhood obesity is being tackled by a few equipment manufacturers, who recently introduced vending machines in schools across the country capable of serving healthy reimbursable meals and/or a la carte items from the same machine. Software built into the machines can identify students making purchases and track which items they are buying. 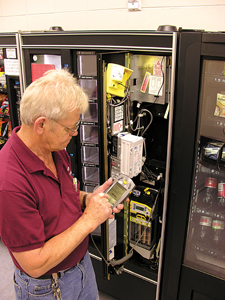 Cygnus Business Media, a B2B magazine publisher in Janesville, WI, has taken its vending program cashless, the better to suit a workforce that has grown accustomed to not carrying cash.

Through its various divisions, Cygnus, which is based in Westport, CT, publishes 67 trade publications, 11 industry directories and 15 custom-marketing publications; manages 68 web sites, and produces 50 expositions annually. The company has 260 employees in Janesville.

White and pink: “We’re very white- and pink-collar here, and comprise a rather young age group,” explains Gloria Cosby, publisher of Automatic Merchandiser, a trade magazine that covers the vending industry. “I just had a gut feeling that cashless would work well, and it is working quite well. There are several folks I know of here at Cygnus who do not carry cash, period, or use only their credit cards for the vending machines, in order to track their purchases.”

In addition to serving as the publication’s publisher, Cosby is also in charge of managing the break rooms’ vending operation, “a sick joke that a president of the company did to me many, many years ago,” she notes.

The Janesville offices contain a pair of break rooms: the larger one contains eight vending machines; the smaller, seven. The units dispense everything from cold and hot beverages to sandwiches, salads, hot entrees like lasagna, and snacks. Products are heated in nearby microwave ovens, and range in price from $1.10 to $2.25.

The units also accept debit cards. “I use my debit card in the machines all the time,” says Cosby, “and occasionally I’ll use my American Express card when I lose my debit card.”

Cygnus collects no revenue from its vending machines, Cosby points out. Central Vending places, fills, maintains, services and collects all sales from the vending units. “We get nothing. We forsake our commission. Generally an operator will pay a commission to a location, [but] we said we didn’t want a commission if we could keep our prices lower.”

Vending contractor Central Vending Co. Inc., also based in Janesville, has “a fantastic commissary,” says Cosby, “so a lot of the sandwich and entrée items in the machines are packaged in its own commissary facility. But then along with that, too, there are also brand-name sandwiches available, like Deli Express and Pierre Foods’ ‘Big AZ Burger.’”

Another reason Cygnus wanted the cashless system was that it provides the publisher of Automatic Merchandiser with an up-close look at the latest vending technologies. “We cover the vending industry,” Cosby explains, “and installing this cashless system has brought us a lot of insight about our marketplace, to have been able to see it from the perspective of the consumer at the machine, if you will.”

Joseph Benedict, executive director, auxiliary services, for Brooklyn College in Brooklyn, NY, finds himself surrounded and outgunned in his battle to feed this commuter college’s 15,000 students. His weapons: a 650-seat cafeteria and 60 vending machines. Just outside the campus: a swarm of restaurants of nearly every description and ethnicity. Could improved vending provide an advantage?

“I don’t think vending is doing as well here as I think it could be doing. The college’s vending machines are scattered around 10 buildings. Revenue from vending is not quite $400,000 a year, and it’s pretty much staying the same.

In our machines you’ll find mostly sandwiches, candy, soda, and snacks. We have three or four machines that dispense cold sandwiches—egg salad, tuna fish, and ham & cheese—for about $1.50 each. There are no entrées because we don’t have microwave ovens, due to the risk to people with pacemakers and other stuff.

Our main hope with vending is that we are able to provide the convenience of foodservice in all the other buildings so students don’t have to walk all the way to the cafeteria. Also, when the cafeteria is closed, particularly on the weekends, we want students to have access to some food without having to go off campus to [Nostrand] Junction.

The truth of the matter is that we are so close to every major fast-food operation that the cafeteria itself is just barely breaking even. That’s why the vending is incorporated into the foodservice contract, in order to subsidize the [cafeteria] operation.

At the Junction, which is only a block and a half away, we have every major fast feeder you can think of. We have Burger King, two pizza places, a sub sandwich place, Dunkin’ Donuts, McDonald’s. There’re also a couple of Caribbean fast-food places, a couple of Chinese fast-food places and a Starbucks right around the corner. And of course students are allowed to bring their own food onto the campus.

Competing against all those guys is tough. I’ve been here since 1990, and we’ve gone through five foodservice companies since then. We’re not vending anything they can’t get elsewhere. I don’t know what unique things we could put in those machines. The students today are pretty much traditional and fast-food oriented. At one point I was thinking that since we have large Caribbean and West Indian populations on campus that a Roti bar would do very well. Roti is almost like a Caribbean burrito, made with curried goat and things of that nature. People enjoy it.

I think the potential is there for vending to be taking in close to $500,000. There are some machines out there that can make things like French fries, soups and other hot foods. I think a lot of our students would jump into that.”