A florescent glow from the Corner Store at the University of Montana in Missoula, Mont. not only draws students for a bite to eat, but also for a lesson in alternative farming methods. 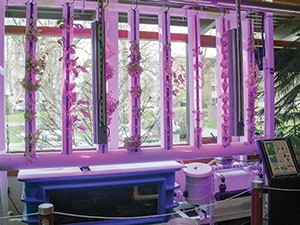 In January, University of Montana Dining installed a 200-gallon aquaponics system to grow nutrient-rich, leafy greens.  In the self-contained ecosystem, locally caught perch add nitrogen to the water, which is absorbed by Swiss chard and other plants that grow on vertical towers, their roots in the medium and their leaves exposed to the air, almost like ivy on a fence pole. The roots absorb the waste and filter the water, cleaning it to sustain the fish. LED lighting does the job of the sun.

“[We have] a strong commitment to sustainability and to local food buying,” says Natasha Hegman, garden manager at UM Dining. “It’s something that [students] value and it contributes to the quality of food and services.”

The aquaponics system was developed by university alumnus Jeff Pernell to replace a set up he created as an independent study project while still a student. His first cultivation experiment lasted two years, as it was designed to do. The dining department wanted to replace it with a more durable system.

Growing produce aquaponically isn’t without a learning curve, according to the university. There were some challenges, such as adjusting the water’s pH balance and finding a mix of produce that can be harvested at different times to maintain the water’s nitrate level.

“[The system] is getting tweaked, honed and changed,” says Rebecca Wade, director of health, nutrition and sustainability at UM Dining.

The school found that certain plants, including kale and Swiss chard, thrive in the set up.

In late March, the first few heads of Swiss chard were harvested and sold at the department’s monthly farmers’ market. As more produce is harvested, UM Dining likely will use it on salad bars and in menu items, Hegman says.

Aside from the aquaponics system, Hegman also over sees a quarter-acre campus garden and a micro green garden, which also provide some produce to the dining halls.

The campus-grown food has been warmly received by students, Hegman says. She adds that the effort has been a great way for UM Dining to foster a dialog about sustainable food and health.

“When food is being grown in front of your eyes, it sort of plays in the back of your mind that these foods are good for me,” Hegman says. “Students are starting to connect the dots between local food and their health.”