New smoothie concept adds another dimension to sustainability efforts at the University of Maryland and other colleges.

At A Glance: University of Maryland Dining Services Snapshot

Freshëns Energy Zone, the newest addition to the foodservice program at 36,000-student University of Maryland in College Park, has the ability to enhance the department’s sustainability goals as well as its top line.

Energy Zone, located inside the university’s Epply Recreation Center, is Freshëns’ signature sustainability concept. It has been introduced at about 35 colleges and universities in the last year. Joe Mullineaux, senior assistant director for Dining Services at Maryland, says his department saw the Energy Zone concept at a regional conference for the National Association of College & University Food Services and felt it would be a perfect fit for the recreation center.

“We had been selling Freshëns smoothies at that location and they were very popular,” Mullineaux says. “Everything [about Energy Zone], from the colors to the menu to the different day parts, caught our eye, and we said this concept is what we needed at the rec center.”

“When we first opened the rec center, I thought people would want to treat themselves after a workout with premium ice cream,” Mullineaux adds. “I was wrong. This is a treat that has a great perception of being healthy and fits into what [students] are trying to accomplish. Since Energy Zone opened sales have increased by 15% to 20%.”

Mullineaux says the location is also a great place to test out new ideas before taking them to other dining units.

“We’re experimenting with some new healthy sandwiches and salads that tie in with the Freshëns Energy Zone concept,” Mullineaux says. “So we’re in a testing stage to see exactly what students want, be it organic, natural or just healthy. Energy Zone is a good place to test these new ideas and concepts to get acceptance before it’s launched on a larger scale.” 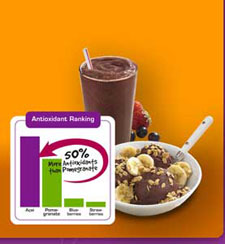 One of Energy Zone’s biggest selling points for the department was its Ecotainer paper cold cup, which is fully renewable and compostable. Freshëns is the first national retail brand to introduce the Ecotainer throughout its company.

“The Ecotainer is the cornerstone of our sustainability initiative,” says John Stern, president and CEO of Freshëns. “We wanted to be a leader in the industry. U.S. consumers use 40 billions papaer cups and 25 billion plastic and foam cups per year. As the first national brand to switch to the completely renewable and compostable Ecotainer cup, we hope to make a difference one cup at a time.”

The Ecotainer cup’s fiber and coating is sourced from sustainably grown, renewable resources. Typically, the paperboard used in a standard paper cup is coated with a petrochemical-based plastic in order to keep liquids from seeping out of the cup. The Ecotainer cup uses a biopolymer derived from plant sugars. The cup had already been implemented in several noncommercial locations such as Dell Computers in Austin, Texas, and Microsoft in Redmond, Wash., and Mullineaux says the cup was a big factor in bringing the Energy Zone concept to campus.

“Freshëns’ commitment to the environment was something we really liked about them,” Mullineaux says. “We started composting about three years ago, so it’s nice to have a national brand that uses a cup we can put into our compost stream. Some of our smaller units have not been included in our composting program, but with Energy Zone’s opening, we are doing a pilot for all of our smaller locations where we are picking up the compost material and taking it to the larger locations, which have compost bins that get picked up daily by the hauler. We’re also looking into replacing all of our foam on campus with a sugar cane-based product, which is also compostable.”

The cup is just one of the features that makes the Energy Zone concept appealing to the university’s recreation center location. The concept also was designed to respond to customer demand for full disclosure about what ingredients are in their choices. Redmond says Freshëns’ has always had healthful products, but the customers weren’t necessarily getting the information.

But the smoothies are the real draw to the concept. One new feature of the Energy Zone is a smoothie made with a Brazilian superfruit called açai. The berry contains 50% more antioxidants than pomegranate and 30 times more antioxidants than red wine. The açai smoothie mix contains a minimum of 120 to 150 açai berries per smoothie. Redmond says this delivers the maximum antioxidant benefits available in the U.S. market. Freshëns buys açai directly from its growers in the Amazon, which directly benefits the rainforests where the berries are grown.

“There is an ever increasing demand for ‘purposeful nutrition,’ which has created a market for açai,” Redmond says. “We were honored to be one of the first national chains to understand the value of açai and work with the exporter to inform consumers of its nutritional uniqueness.”

Mullineaux says his department is so happy with the concept they are planning a second location in a dining hall that is being renovated. The Energy Zone concept is just one part of the department’s sustainability initiatives in the works.

“We’re looking at expanding our composting program by incorporating the smaller venues and in our c-store we now use bags made from 100% recycled material,” Mullineaux says. “In each of the stores, we have a place where you can bring the bags back and our supplier will take them back and recycle them into new bags. We also are in the process of renovating one of the dining halls, which we hope will be completed in 2011, that will be a LEED-certified Silver building—complete with a ‘green’ roof.”