Sister Alice Marie Quinn is on a mission from God to serve good meals. As program director of the St. Vincent Senior Citizen Nutrition Program in Los Angeles—the largest private meals program in the nation, she works every day to make sure everyone can have a quality meal. Since she founded the program in 1977, she has expanded the program to serve 900,300 meals annually to the elderly poor who live in declining neighborhoods surrounding St. Vincent Medical Center. 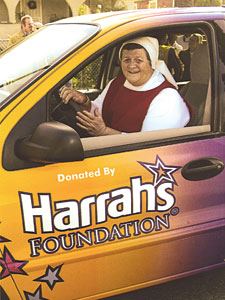 As Sister Alice Marie Quinn, DC, BSc, RD, bikes along the quiet street at 6 a.m., she calls a cheery “good morning” to the burly biker barreling toward her. He zips past with barely a glance, then circles back for another look at her habit. Incredulous, he asks, “Are you really a nun?” “Yes,” she replies. “Cool,” he says, and continues on his way without a backward glance.

It is Quinn’s “coolness,” people savvy and management skills that have allowed her to make friends and influence the people who hold the purse strings so vital to the operation of the St. Vincent Senior Citizen Nutrition Program in Los Angeles—the largest private meals program in the nation today. Quinn has served as program director since she founded it in 1977 to provide nutrition services to the elderly poor living in declining neighborhoods surrounding St. Vincent Medical Center.

‘Special needs’ specialist: A Daughter of Charity since entering the order on her 19th birthday, Quinn received her education in dietetics. Upon completing her dietetic internship at Charity Hospital of Louisiana in New Orleans at the age of 25, she was immediately named foodservice director. The swiftness of the appointment left the usually voluble sister almost speechless, she recalls.

After four years there, followed by nine years at Mary’s Help Seton Medical Center in San Francisco, she was solidly grounded in the basics of providing meals for special needs populations. Today, she oversees the preparation and delivery of a total of 900,300 meals annually, many of which are delivered to other than senior recipients.

“We not only bring a meal, we visit them and look out for them,” Quinn explains. “It’s for everyone regardless of religion or their ability to pay. In the past we’d ask clients if they had special needs, allergies, likes and dislikes, because if we’re going to travel 10 to 15 miles and bring something and then they won’t eat it, what’s the point?

Now, we ask them about 15 specific questions. St. Vincent de Paul said, ‘Don’t give them what we want—ask them what they need and what they want.’ Since I make out all the menus and I love to eat, I do give them everything I like,” she says, tongue in cheek.

The human touch: Quinn admits she has a “God-given good head for management” and she keeps a favorite saying top of mind: “Management is not the direction of things but the development of people.” “So you take time and patience in developing the people—I always try to do that,” she says. “And I always say to volunteers, ‘When you die, you’re going straight to heaven if you take care of the poor.’ How could you not want to do this? We keep the same drivers and runners on the same routes so they know the clients. And we tell them it’s OK to give a few extra minutes if the client needs it—if they seem lonely or weepy.”

Meanwhile, Quinn has made sure that those who work 20 hours a week in the program—some are former indigents whom she’s mentored with work ethic skills along the way—are now covered by health insurance. In fact, $2.3 million, the largest portion of the budget, goes to pay salaries and benefits including life insurance and a retirement plan.

High standards: The program she offers utilizes food resources judiciously, avoiding waste by providing menus that include the foods clients like to eat, and utilizes the highest quality and most nutritious foods the program can afford.

The program also provides children with healthy foods that Quinn knows they will eat. With the expanded capacity of her new 16,000-square-foot kitchen, 5,000 meals can be provided including those for children at several local charter schools.

Quinn is unshakable in her belief that “God will do the work” if she raises the money for the program and she’s confidently gone forth and reached out in one way or another to the 55,000 donors who now support the enterprise. “It’s great work and I feel blessed to do this,” she says. “Being in foodservice, we do a lot with vendors such as Sysco and, as soon as people know you, they try to get you bargains.”

Whatever it takes: St. Vincent Meals on Wheels (SVMOW) is a not-for-profit charitable organization, so funds can be legally raised as needed to support the program and its $6.1 million annual budget. Over the years, Quinn has become well-known in Los Angeles and often lends her public speaking skills to many meetings of service clubs and churches that support local organizations.

The SVMOW is an official charity of the Los Angeles Marathon, and Quinn has ridden her bicycle in five marathons, most recently in one held about the time of her 70th birthday last year. She’ll also happily sing or tap dance, if that’s what it takes to drum up financial support.

Safe haven: Currently, Quinn serves as national president of the Meals on Wheels Association of America (MOWAA), but when she’s not attending its numerous regional meetings she’s focusing on her latest major project: the construction of a brand new senior housing complex to accommodate 114 of SVMOW’s neediest clients on the grounds of the Saint Vincent Medical Center campus.

“As to the next project, I never look ahead—I’m open to God’s inspiration.”