School lunch is heating up. As expectations rise in the noncommercial sector, the old-fashioned cafeteria has become a hot topic. Political pressure on schools has seesawed over the past eight years, and nutritional regulations on items like sodium and whole grains have been overhauled (and back again). Meanwhile, students, parents, teachers, administrators and policymakers are demanding more healthfulness and better taste from school meals, often for the same cost. 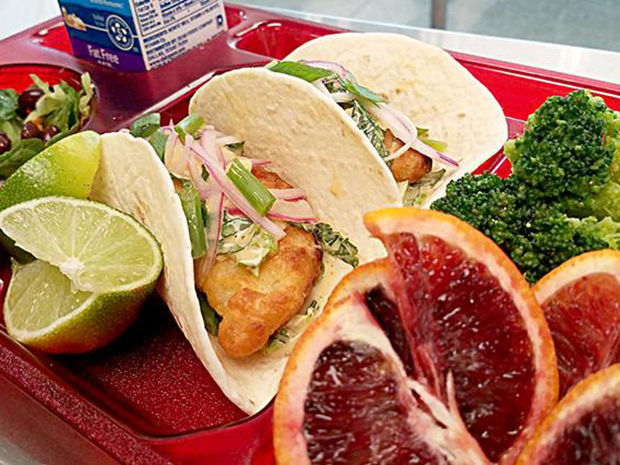 Yet the industry’s best are dedicated to getting better, even while looking to the future with caution. “There’s not a lot of clarity. We have an eye up toward Washington to see what’s going to happen in the future,” says Jessica Shelly, director of food services for the 37,000-student Cincinnati Public Schools. “The possibility of block grants is where my head is now. In the meantime, we’re steady on the course.”

As the regulatory landscape affects everything from funding to flavor, foodservice directors must calculate more carefully and be more inventive than ever for the students they feed.

Making the most of it

Meanwhile, directors nationwide are bringing the skills they have to serve food that’s healthier and more delicious. Joe Urban, director of food and nutrition services for the 76,000 students of Greenville County Schools in South Carolina, brings a commercial food background—he owned a restaurant for 15 years. “Although there have been a lot of changes to our industry in the past seven or eight years, most of us are focused on finding the most creative ways to serve our kids the best food possible, no matter our political beliefs,” Urban says. “More and more districts are stepping up their game and serving our customers the kind of food they’re used to seeing in food courts and malls and on college campuses.”

With a Master of Business Administration degree, Meredith Potter, director of school nutrition for Georgia’s Houston County Schools, brings the corporate world’s strategic mentality to her work. Potter uses her MBA to find creative ways to improve her nearly 30,000-student operation—without losing her cool. “Change always causes a little anxiety,” she says. “For us, change is an opportunity to look at our current practices, examine the ones that are working, and tweak the ones that are not.” 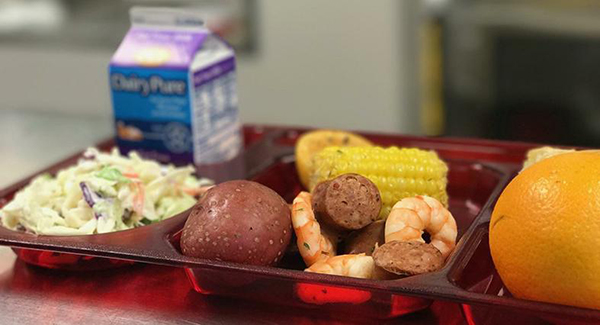 To elevate their programs, many FSDs have started with their staff—and that often goes beyond just cooks to other school support staff. For the Gooding and Shoshone school districts in Idaho, changes started with a conversation between a physical education teacher and Anji Branch, child nutrition director for the districts. They applied for a Teen Nutrition Grant for a walking club in which the districts’ 1,800 kids could earn active field trips, like roller skating or snowshoeing. Because of that effort and others like it, their districts became the nation’s first to meet the U.S. Department of Agriculture’s HealthierUS School Challenge in 2009. Branch even got a shoutout from then-first lady Michelle Obama.

In Greenville, Urban wanted a chef-driven program. Starting the 2010-11 school year, the district partnered with the culinary arts program at its local vocational school, Greenville Tech, to put all employees through a weeklong culinary boot camp. The staffers got both nutrition education and hands-on instruction. “It was an opportunity to get all our employees on board with our vision,” Urban says. The team also hired as many supervisors from higher ed and the private sector as possible.

Cincinnati schools raised minimum wages to $15 per hour for its staff at the start of the 2017-18 school year. Giving its employees a living wage had become a top priority. To minimize the budgetary impact, Shelly tracked meals per labor hour. “It is very important for us FSDs to be measuring these things,” she says. “If you’re correctly staffed, raising the wage to your employees isn’t as detrimental.” 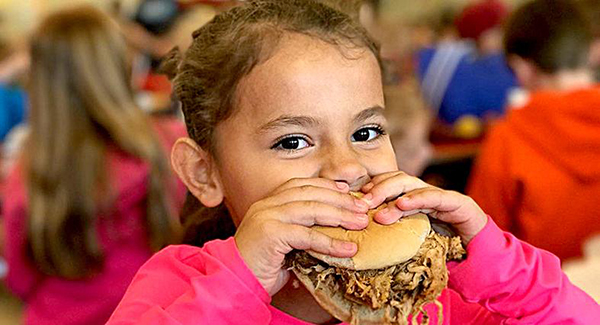 Many districts have implemented what they call healthy choice bars that go beyond salad. Branch started hers in 2001, offering unlimited fresh fruits and veggies at the start of serving lines. This year she’s played with yogurt bars, featuring vanilla or strawberry yogurt and toppings like diced peaches, local raspberries, strawberries, graham cracker crumbs, shredded coconut and raisins. Students love it because it feels like a treat, and using USDA foods helps control costs.

To cater to diverse taste buds, Cincinnati has expanded its salad bar. Shelly added spice stations in 2011 that include lemon pepper, garlic and herb mixes, Sriracha and even nonfat butter-flavored granules called Butter Buds. If kids are spicing up their carnitas tacos, she’s noticed, they might also add tomatoes, onions or other produce while they’re up there. “That’s been a really successful implementation for us,” she says. “By having our spice stations at the salad bad, we drive traffic there. And it may be a cent a meal. It’s an incredibly affordable option.”

Across the country, directors are playing with ways to improve their food quality, from cutting out canned and highly processed foods to buying superior meat and seafood, to using local produce and from-scratch cooking. Branch uses raspberries, melon, sweet corn, tomatoes, peppers, apples and pears from Idaho growers. By skipping a distributor, buying local winds up cheaper, she says. Urban has found the same in South Carolina. His team expected switching from canned to fresh produce would be an investment. Instead, it proved a cost savings.

Greenville brought the same approach to meat and seafood. From 2016-17, it shifted to whole-muscle chicken, and this school year purchased wild Alaskan seafood exclusively. In 2017, the district boasted that it had become the only one in the country licensed to serve certified Angus beef. “The precooked hamburger we were using here for 20 years, when you started breaking out costs of delivery fees and everything else, we were paying over $1.10 (per burger),” Urban says. “I put out a solicitation for certified Angus chuck and pay significantly less than that now. We questioned everything. Why do we buy chicken nuggets, and can we do something better?”

The school-lunch funding game changed in 2014 when the Community Eligibility Provision, or CEP, was offered nationwide. CEP allows the highest-poverty schools to serve free breakfast and lunch to all enrolled students. Districts have to apply, of course, and demonstrate their need based on how many of its families are eligible for other social-welfare programs. In turn, the federal government reimburses the schools.

Numerous directors have found CEP has made their overarching goal—nourishing as many children as possible so they can learn—easier to achieve. After doing thorough calculations, Greenville adopted CEP in 21 of the district’s 101 schools. “We could’ve done more, but we analyzed the percentages of our schools and implemented it where we were maximizing our revenue,” Urban says. “If districts are very careful and implement it at the schools where it makes sense, I think CEP is fabulous. It does reduce the paperwork burden.”

Potter describes her team as “big advocates” for the program because of its impact. Before CEP, Houston County Schools’ breakfast participation rates were stuck in the 40% range. Now, the district’s 16 community-eligible schools average 85%. “Because everyone has the same opportunity to eat that healthy meal at school, it has become an equalizer and a time of day everyone looks forward to rather than dreads,” Potter says. “It’s removed some of those stigmas. Our principals relay that they’ve seen less discipline referrals, especially in the mornings. Attendance is better, and kids are better able to focus in the classroom.” 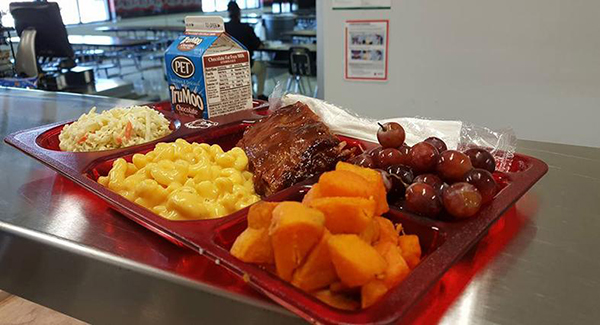 While many districts continued as they were, the rule changes seemed most keenly felt in the South. While Georgia’s Houston County, for instance, continued serving fat-free milk, it had been struggling to meet the sodium requirements. The district had hired an executive chef in fall 2016 to help, using more herbs and spices in place of salt. “We knew in order to be able to meet these new regulations we were going to need someone trained in culinary arts,” Potter says. On the whole-grain front, she welcomed the return of the white biscuit, adding that participation has risen since it came back.

In South Carolina, whole-wheat biscuits have been successful enough to keep serving. “We’ve been able to find ways to make them very acceptable to the kids,” Greenville’s Urban says. “If we were serving grandma’s Southern biscuit we’d probably do a bit better, but I don’t think we could honestly tell our state agency that we’re having a problem with participation because of the biscuit.”

Many districts, such as Houston County, are driving engagement through social media. Two years ago, Potter made a push on Twitter, Facebook and Instagram (the latter with pictures of kids holding trays, since they like to see themselves and share images between friends). The district also holds votes on foods and announces events through social media. “That reaches all age groups, parents through kids, and we have seen tremendous returns on that investment,” Potter says. “If we have a smoothie stand in the gym hallway, we can tweet that, and you can see immediate impact.”

Peers help influence each other, so Gooding and Shoshone started a 12-member Student Advisory Council this school year that meets monthly to test new recipes. The district also uses a text-messaging app called Remind. Parents and students can sign up to receive nutritional info and fun facts about the food.

Staff and administrators can be engaged in several other ways. Cincinnati gets educators through the cafeteria doors via Mentoring Mondays, a partnership with the Cincinnati Health Department and a local hospital chain. If staff members eat in the lunchroom for eight Mondays of the year, they get $100 in their wellness account. The catch: They have to eat with students. Table tents around the cafeteria suggest conversation topics such as water, protein and vitamin C.

In Idaho, Branch offers a special staff menu. “The participation is not going to be there if you’re not engaging staff,” Branch explains. “Teachers are our customers, too.”

Shelly makes sure even board members are aware of the school lunch quality. In 2012, she began bringing dishes like barbecue beef sliders and Cincinnati three-way chili to board meetings. She also brings in Ohio food vendors. When a board member asked which company catered the meeting, Shelly knew she’d been successful. Now, board members write to ask what she’s bringing every month. She’s also in regular touch with federal and state policymakers. “I am in constant communication with my representatives and senators in Ohio,” she says, “visiting them in D.C. and inviting them to our schools to see the good that’s going on in our lunchrooms.”

The final group with whom smart K-12 directors communicate? Fellow foodservice directors. Urban welcomes dozens of groups to Greenville for tours every year. He encourages the exchange of industry intel.

“Central kitchen or not, free and reduced or not, we all can do better,” he says. “Over time, every little change adds up to tremendous change. I think it’s important that all districts share their best practices with each other.”

Americans are not eating their vegetables