During his 36-year career, Rod Bond has devised the concepts and shaped the team to lead Sodexho's schools division to success. 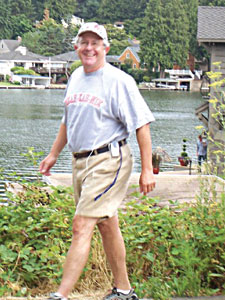 As Rod Bond steps down as president of Sodexho’s school services division at the end of the month—a position he’s held since 2000—he can take pride in the success of the division he helped create in 1986 under the Marrriott Management Services banner. Today, the division serves more than 400 million K-12 students annually. Bond expects the Gaithersburg, Md.-based contractor to add 25 school districts, serving 100,000 to 150,000 students, to the roster prior to the start of the new school year next month.

Originally from southern California, Bond is at heart an inner-directed self-starter who loves nothing more than walking the back roads and trails of his beloved Oregon, typically logging more than 1,200 miles a year. Bond is also an involved family man who, with his wife Wendy, devotes priority time to a passel of nieces and nephews.

Laying the foundation: In the work realm, Bond is the quintessential team builder with a perceptive eye for recruiting people who will remain with the company over the long term.

The foundation for Bond’s successful career was laid at UCLA, but not in its classrooms so much as in the dining rooms of a private residence hall called La Mancha, then operated by the contract management company Saga. “I got into hospitality and foodservice putting myself through school,” he recalls. “I worked breakfast, went to class; worked lunch, went to class; worked dinner, went to study. There were ‘three shows a day’ and you knew immediately how you did.”

After Bond graduated in 1971, Saga hired him full-time, gave him six weeks of training and assigned him to Temple Buell College in Denver as a manager. After three months he was transferred back to California to serve as food service director at 300-student Harvey Mudd College in Claremont. He demonstrated enough skill at this small venue that Saga soon transferred him to 1,000-student Claremont Mens College.

In 1976, Bond assumed his final position as food service director, at Lewis & Clark College. But in fairly rapid succession, Bond moved up through a number of increasingly responsible positions: he became marketing director for Saga’s new marketing department for colleges and universities, then transferred to human resources and finally was named regional district manager.

The shift to schools: “Following the sale of Saga to Marriott in 1986, I went into the school business,” Bond says. “They felt schools needed a separate look. At the same time, we were incorporating the Saga acquisition plus the Service Systems schools system division [another acquisition] to create the schools division for Marriott. I became human resources director for the division that encompassed about 115 school districts.”

At the outset, Bond was virtually a one-man department, seeking out, hiring and training all Marriott’s foodservice directors nationwide. Bond set up the department and established the training program for managers as well as hourly workers, while simultaneously coordinating the assimilation of two companies into the new parent.

Creating the programs: In 1990, Bond was named senior vice president of school services, responsible for overseeing the company’s contracts with school districts in 13 western states. During that decade he grew the region from 33 districts to over 158 districts, maintaining a contract retention rate of nearly 97%. To keep customer satisfaction high, he and his team developed and implemented numerous cutting-edge programs, several of which have become standard throughout the school sector. These include: “Free Breakfast in the Classroom,” “A to Z Salad Bar,” and “Free & Reduced-Price Marketing Campaign,” which is designed to encourage economically disadvantaged students and families to participate in the school lunch program.

Developing culinary programs such as the “School Services Career Classroom” targeting kids—initially those in high school, later expanded to include first through sixth graders—ranks high on Bond’s list of successful innovative concepts.

The next generation: In 2000, in California, the division introduced the “Kid’s Cooking Contest” for first through sixth grades. Now, it provides a way for youngsters to learn to cook, understand nutrition and get inspired about foodservice. Schools run the contest once or twice a year, giving students a chance to prepare their best entries. Then the foodservice department replicates the recipes to serve in the cafeteria. “We talk about it a lot since there’s a focus on nutrition and easy foods to combine using fresh fruits and vegetables,” Bond notes. “I’ve been involved in hospitality for 36 years and it’s no different today: it’s ‘three shows a day,’ but now we’re involving kids to begin a foodservice career. It’s come full circle.”

Bond is pleased to see the increased availability of fresh produce for schools, especially through the commodity program. Taking advantage of that program is an avenue that he has consistently encouraged by prompting state child nutrition directors to make more healthful decisions as to which items they choose as commodities and to solicit them from the federal government.

Leading the industry: “Free Breakfast in the Classroom” has been running for at least a decade and is now accepted by 20% to 30% of districts, both contracted and self-op, across the country, according to Bond’s estimate. “It’s a great program to give kids nourishment,” he contends. “It actually may encourage some of them to come to school.”

Down the road, Bond believes that menus will continue to evolve by providing more ethnic foods, reflecting the diversity of the student population. Concomitantly, he believes the precepts of good nutrition will be more and more widely accepted. “It’s not just what you eat; I see activity becoming more and more a part of a good foodservice program—it’s making sure they move more. We will continue to work with schools to stress the importance of physical activity. Today our lifestyle is so much more sedentary that we have to make a conscious effort to be active—walking, running, playing. It’s just like the effort to eat good foods.”

Education for parents: Realizing that what foods kids see advertised on TV can negate the good choices provided at school, Bond and his team have, over the past five years, provided on-line nutrition information for parents. “They can access sodexhoeducation.com, which is linked to school districts around the country. Parents can write their comments or questions and we’ll reply,” he explains.

Circling back to his early involvement with recruiting, Bond notes that as we become a more diverse society, “it’s critically important that we at Sodexho continue to lead with diversity.” And, as president of the school services division, he has led by example through involvement as an executive sponsor of the company’s Women’s Network Group (WiNG), a corporate diversity initiative.

Planning for ‘fun’: While his wife continues to work for several more years before retiring, Bond’s plan includes traveling the world solo, enjoying snorkeling, hiking and exploring different venues, such as the Caribbean, the Galapagos, and Machu Picchu in Peru. With well-honed attention to detail, he’ll sample the local fare motivated by his keen interest in ethnic cuisine and by decades-long habit.