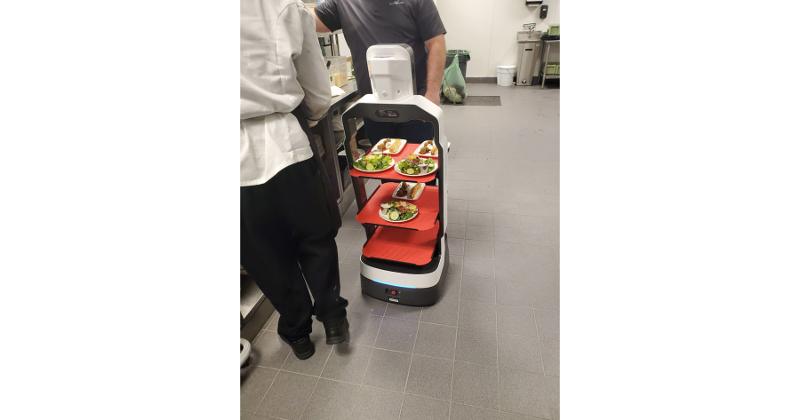 Like many operators in the foodservice industry, the dining team at Wesley Enhanced Living Main Line in Media, Pa., has been struggling to find workers.

“We need people who really just can rely on hourly wage versus hourly plus tips,” says Dining General Manager Shawn Fontaine. “We saw that our labor pool was going down a little bit in that area, so we had to figure out a way to compensate for some positions that we knew we needed.”

Fontaine decided to purchase two robots to help fill the gaps and says that they have allowed the dining team to continue to provide quality service to residents amid the current challenges.

Fontaine was hesitant about investing in the robots at first, however, when he saw that they would cost around the same as hiring human employees, he decided to try it out.

Wesley Enhanced Living Main Line’s team of two robots from Richtech Robotics have helped fill in for roughly three human workers. The robots are used primarily as food runners and bussers and can hold up to eight entrees at once. A staff member does need to be present to help load and unload the dishes from the robots, which follow programmed routes to move between the dining room and the kitchen.

Technicians from Richtech helped set up the robots when they arrived and used the robots’ mapping camera to record a 3D floorplan.

“They just went around, and it captured every corner, every obstacle, every table and every seat,” says Fontaine. “Then, after that, the floor plan was created.”

Similar to a car, the robots are equipped with front and back blinkers to show which way they’re going to turn. They also have sensors that let them know when something is blocking their path. In that case, the robot will stop and reroute itself.

Employees have embraced their new robot coworkers, Fontaine says, since they’re able to get more face time with residents and don’t have to rush back and forth to the kitchen carrying dishes.

Residents have also responded well to the new employees.

“Everybody’s head turned when they first came out, it was like they saw a ghost, they [had] never seen something like it before, and then the smiles started happening and they began clapping and it was pretty funny,” says Fontaine. “They accepted it really quick.”

The residents are still amused by the robot waiters, and staff have also tried to use them to bring more joy to mealtimes. During the holidays, the robots played Christmas carols as they delivered food and have also played “Happy Birthday” to help celebrate residents’ birthdays.

Overall, the robots have been a success, Fontaine says, and he advises other operators to be open to using technology during challenging times such as this.

“It is really easy to discount or not like the new technology that's coming out. You have to take a gamble on some things and sometimes things work and sometimes things don't,” he says. “But if you keep an open mind and just to keep on pushing the ball forward, you can keep on creating new ways to help with the trying times of labor or anything else that we’re up against.”