Just about every foodservice operator these days is aware that conserving the planet’s resources is part of the job description. Conserving "energy"—as the gas or electricity that powers equipment, cooks meals and heats buildings—is generally top of mind. But conserving water and  reducing waste is also a concern for some operators. 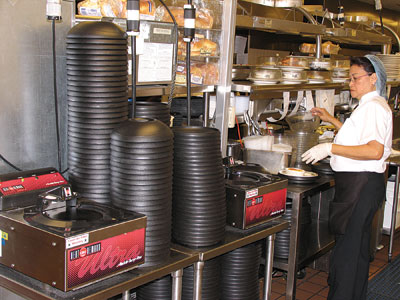 Some aim to "do the right thing" when replacing old equipment, doing their their own research or relying on advice from equipment manufacturers’ specialists. Operators involved in a major renovation or new construction usually hire consultants to provide a broad-based, hopefully unbiased, perspective. Fortunately, much new equipment is being designed with resource conservation in mind, and choosing units with an Energy Star rating can prove to be the surest bet.

Tested solutions: Stu Reeve, energy manager for the Poudre School District in Fort Collins, Colo., has been involved in helping to open a new school in his district almost annually since the Silver LEED (Leadership in Energy and Environmental Design)-certified Fossil Ridge High School was built in 2004. "We like to be on the ‘cutting edge’ versus the ‘bleeding edge,’ so we look for tested solutions that are up and running," Reeve asserts.

Since completing the Fossil Ridge project, Reeve looks for Energy Star ratings prior to making any equipment purchase decision. “Energy Star has a ‘portfolio manager’ for schools and you can enter a national data base,” he says. "It ranks your school from 0 to 100; a score of more than 75 gets your facility labeled an Energy Star School."

He finds there are now many valuable tools available through Energy Star, as well as through the Energy Smart Schools Program of the Department of Energy. "It provides equipment and design ideas with examples from your part of the country. There are great tools to help you make wise energy decisions," Reeve points out.

Furthermore, when the new LEED for School parameters were published earlier this year, Energy Star appliances were specifically part of it, he notes.

Number-one user: Reeve contends that the most energy intensive area in any  school is the kitchen; it’s also the number one user of water. At Fossil Ridge High School, the architectural design utilizes natural lighting in the common seating areas, including the servery. High-performance Low-E glazing on windows means sunlight doesn’t heat up the room. With 95% of the building naturally lit, Fossil Ridge uses approximately $100,000 a year less electricity and natural gas than another, but slightly smaller, school in the district.

At 200-resident Royal Oaks Manor in Bradbury, Calif., Director of Dietary Services Ron Erickson has been updating kitchen equipment in this 50-year-old facility in piecemeal fashion for years. "We look at Energy Star ratings as the simplest way to cut to the chase," he says.

Recently, when he saw his gas bill climbing, Erickson replaced a single gas-fired steamer with two 3-pan SteamChef steamers from Cleveland. “We bought two machines versus one larger unit so that if one is in use we can use the other without having to open the first while steaming is in progress,” explains Erickson.  "Plus, if one goes down, we have the second."  In addition, he expects to receive a one-time rebate check of $1,250 ($625 per machine) from Southern California Edison, his electric supplier, for his energy-saving efforts.

Cool idea: More than a decade ago, when Aladdin Temp-Rite introduced Heat On Demand (HOD) induction bases to replace stainless steel bases for keeping patient meals hot from the kitchen to the bedside, it was seen as an energy saver. With the older system it replaced,  bases would heat for 90 minutes to two hours to store  enough heat to warm food for an hour. With HOD, the operator puts a base on an activator, pushes a button, and 10 seconds later it’s hot enough to hold temperature for an hour—without heating up the kitchen. As a result, less air conditioning is needed.

Today, more than 3,000 hospitals and nursing homes are using the system; Kris Schroeder, RD, director of nutrition services at 697-bed Swedish Medical Center in Seattle is one of the original users. "We didn’t go into it from an energy savings point of view but we thought it was a fit with our On Demand room service program," she says. "At First Hill campus, we’re 24/7, so rather than wasting power to heat 100 bases for hours on end, heating as needed makes a lot more sense."

Pulper plus: Similarly, Patti Guist, director of associate programs and services for Humana Inc., based in Louisville, Ky., recently installed a Hobart dish machine that uses less rinse water—in keeping with a corporate-wide sustainability program. Come the fall of 2008, when Humana’s new call center opens in Cincinnati (with all service on paper plates), she’ll install a Hobart pulper to reduce waste. "In Green Bay, Wis., we’re serving about 2,000 customer a day and all garbage went into one 30-gal. garbage can from the pulper," Guist reports.

Bill Reynolds, provost at City Colleges of Chicago, has seven pulpers operating in various venues throughout the campus. "Pulpers and extractors chew up garbage, send it out to an extractor, suck out all the water and reduce eight cans of garbage (from one machine) to one can. Pulpers cost more than a garbage can, but we save money on hauling costs." 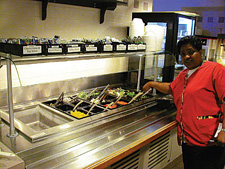 There’s a plan in the works for a new facility to replace the 100-year-old, 176-bed Martha Jefferson Hospital in Charlottesville, Va.—and it’s just waiting for approval. Catherine Boucher, RD, manager of food and nutrition services, and Bill Weigold, manager of environmental and laundry services, are impatient to get the go-ahead because they’re aiming for LEED certification from the U.S. Green Building Council.

The new facility, also planned for 176 beds with a cafeteria to accommodate 250 to 350 customers daily, is scheduled to open in 2012. Weigold has been named “LEED Champion” for the new facility. "I’ve been told nothing is out of the question. For example, are solar panels an option? We need to investigate. My job is to get as many ideas out there as possible regarding energy efficiency, waste efficiency, cleaning chemicals—then discuss it with the engineers. Then, you hear the dollar amounts and the administration says, 'No, it’s too costly,' or 'Yes, we’ll get back the investment'."

Seeing the 'best': While groundbreaking is expected "soon," equipment selection—with guidance from a consultant—is 18 to 24 months away, by Weigold’s estimate. But the schematic has been completed and Boucher is pleased to have been shown the footprint by the consultant.

With the new facility at least five years down the road, Boucher and Weigold have been concentrating on updating some of their existing equipment. "We just bought a Cleveland steamer and drop-in Liquid Tech coolers from Delfield," Boucher points out. "The coolers are more energy efficient because, in the salad bar well, normally there are columns around the drop-ins to keep the inside metal walls of the wells cool. Now, the wells are filled with liquid so all sides are cool."

Cold savings: As she’s become more conversant with LEED parameters, Boucher now looks at the physics of "cold" in a whole new way. "Flaked ice uses 20% to 25% less water than cubed, but it melts faster. So on patient floors and in outpatient areas, we’d need more flaked ice machines, but we’d still have cubed in the kitchen for catering. Either way, we can’t use cubed or crushed ice to set platters on—the health department doesn’t allow us to use ice as a coolant."

Looking to the future of the Martha Jefferson Hospital, Boucher recently learned that the new facility will plumb all of the air conditioners and built-in refrigeration, walk-ins and ice machines, so they will be able to re-use all of that potentially energy- and water-saving condensation.

At BYU Dining, all new equipment must conserve the planet’s resources.

For more than 50 years, Dining Services at Brigham Young University in Provo, Utah, has sought out equipment built to last. Now, as Dean Wright, director of dining services, gears up to move his department into a new facility next spring, he’s putting his emphasis on purchasing Energy Star rated equipment that will help conserve the planet’s precious water and energy resources for generations to come.

"We’ve been going through the process for the last four years; there are 11 'build' projects in our department. It’s maybe 50 years since BYU has embarked on such an aggressive building and remodeling plan and creating a new dining perspective. Since the time of Wells and Mryle Cloward, who came here in 1952 and founded BYU Dining Services, BYU has been at the forefront in selecting equipment. We have a pre-World War II Hobart mixer that’s [still] in daily use. Fifty years ago, the leadership decided to invest in cutting-edge equipment that would last. 'Green Building' was not part of the vocabulary, but 'efficiency' was.

About 20 years ago, the university made a commitment to recycling that continues to this day. We were one of the first schools to put in a full pulper system. We don’t put any waste into the public waste water system and we reuse pulp as fertilizer on campus lawns.

As result of a drought, five years ago we determined that all warewashing equipment, etc., had to be as energy and water efficient as possible. Hobart helped design the pulping system for BYU, then they came through with Opti-rinse, which uses about one-third less water than a traditional warewashing machine.

We made a conscious decision that all new equipment will be Energy Star rated. While this equipment may cost 10% to 15% more, the savings in utilities over the long term makes up for the initial cost. And, just as important, it makes for a friendlier environment for our employees. For example, we use hoods that turn on and off automatically, so you don’t have the constant roar of the hood. The same with heat reduction: anything you can do to remove heat means the less volume of cold air you need to circulate and that reduces energy use.

In April 2008, we’ll be replacing our 50-year-old facility with a full new building for dining commons—we determined [building new] would be better for the environment than renovating. There will be a kitchen, dining room and c-store. In our Euro-kitchen, we’ll have a tandoori oven with very high heat for quick cooking; all our refrigeration will be Energy Star. We’re going with combi ovens for versatility—we set the Energy Star parameters.

Plus, all of our mobile carts are Energy Star rated—that rating is just coming on for these carts. If there is no rating, we do our own research."