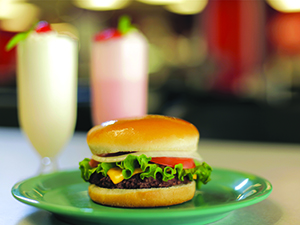 With renovations to Parmalee not planned until 2016, Petrino and his team tried a number of tactics to entice students to use the old hall and reduce some of the congestion being created at Corbitt. “We tried everything,” Petrino recalls. “We tried breakfast all day, we tried vegetarian, all kinds of different things and nothing really caught on.” So Petrino and Peter Testory, assistant director for residential dining, began looking beyond campus for a solution.

What they noticed was that local burger joints like Five Guys and Smashburger were generating long lines. “We decided, ‘Hey, let’s put in a gourmet burger bar here,’” Petrino says of the university’s take on a burger concept, which is named Ram Shack. “That was the key and [Parmalee] turned right around and now [Ram Shack] is one of our most popular stations on campus.”

After a few minor updates like a fresh coat of red paint, the addition of retro décor, stainless steel trim and black floor coverings, the space was transformed into a 1950s-style diner. And with a few pieces of new equipment including a bun toaster and milkshake mixers, the dining services team completed the update “for less than a couple thousand dollars,” Petrino adds. Ram Shack opened in January at the start of the spring semester.

Today students line up at the Ram Shack counter for freshly ground, hand-pattied hamburgers, shoestring fries, rosemary olive oil potato chips and made-to-order milkshakes. This fall, an artisan ketchup bar will be added. Unlike other locations on campus, employees use a flattop grill at Ram Shack. “We follow the same formula that these casual burger huts are doing [by focusing on a limited menu of burgers and fries] and it’s turned out to be a really, really popular thing,” Petrino says. “We were a little nervous at first, especially Peter, because everybody seems to want healthier options these days and this wasn’t a very healthy option. But it is incredibly popular.”