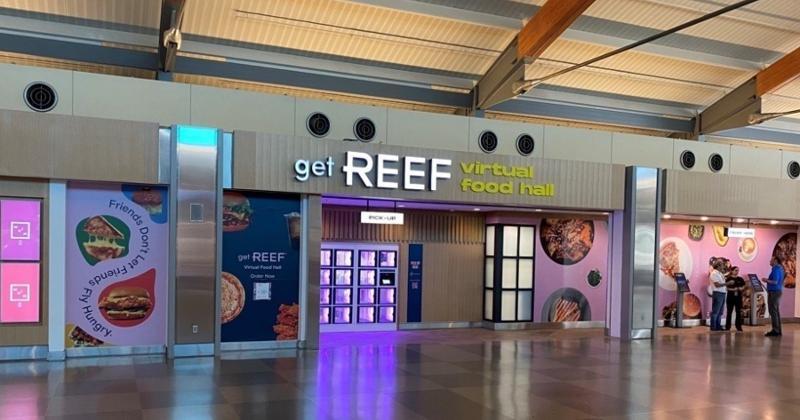 The getReef Virtual Food Hall is in Terminal 2 of Raleigh-Durham International Airport. / Photograph courtesy of Reef

Travelers at Raleigh-Durham International Airport have a new way to get some grub before boarding.

Ghost kitchen provider Reef Kitchens has launched a “virtual food hall” in the airport that will offer food from nine restaurant concepts. Customers can order on their phones or at Reef kiosks in Terminal 2 and pick up their meals in nearby lockers. In the future, they’ll be able to have food delivered to their gate, Reef said.

The company is operating the getReef Virtual Food Hall in partnership with HUBB Kitchens, a Raleigh-based ghost kitchen provider.

Concepts on offer are Krispy Rice, 800 Degrees Pizza, Pei Wei, Xochimex Cantina Grill, Zinburger, and Rebel Wings, as well as local restaurants Beyu Caffe, Hubb Kitchen and American Meltdown. Customers will be able to order from multiple restaurants in a single order. The selections will rotate based on demand, Reef said. 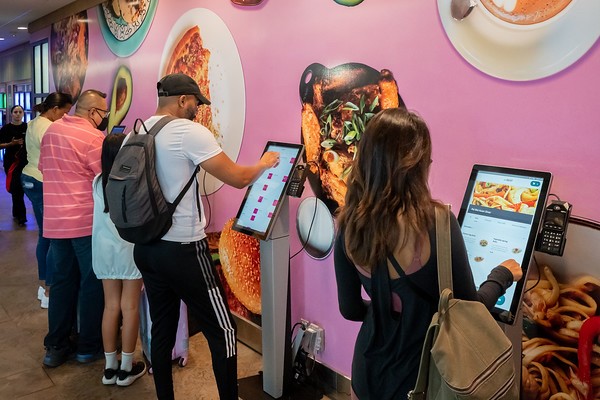 Customers order from kiosks at the grand opening of the getReef food hall. / Photograph courtesy of Reef

The airport outlet represents a new strategy for Miami-based Reef. Until now, it has operated mainly out of trailer-like units in parking lots, where the focus has been on delivery rather than pickup. The Raleigh-Durham outlet is likely its most high-profile location to date.

“Reef’s first-ever virtual food hall brings dramatic innovation to the future of airport dining by giving travelers unprecedented variety and convenience,” said Valentina Ellison, SVP of Reef Kitchens, in a statement. “We look forward to continuing to work with RDU as we serve delicious meals to travelers and continue to pioneer the future of the ghost kitchen industry.” 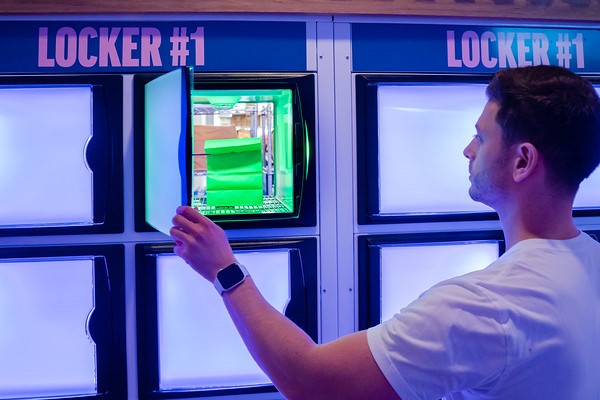 A guest picks up a meal from a locker. / Photograph courtesy of Reef

The move comes as more ghost kitchens are seeking higher-traffic locations that can serve multiple channels beyond just delivery. Kitchen United, for instance, has a growing network of outlets in Kroger grocery stores, and CloudKitchens has opened a couple of food halls. Ghost Kitchen Brands is expanding primarily in Walmarts. Airports could present another opportunity for growth.

Reef has grown rapidly behind a $700 million investment in 2020 that included contributions from SoftBank. It has licensing agreements with a number of restaurant chains, most notably Wendy’s, and had plans to open thousands of kitchens last year.

But Reef’s kitchens have run into problems with health and permitting rules in some markets, and it has had to temporarily or permanently close some locations. Recent estimates put Reef’s global kitchen footprint at about 500 total brand locations.

In May, the company said it was laying off 5% of its staff to focus more on profitability. Despite the setbacks, Reef has maintained that its kitchens are doing well and growing.