CDC gets into recipe business

Everyone, it seems, wants to offer us tips on healthier eating. Even the Centers for Disease Control and Prevention has gotten into the act. 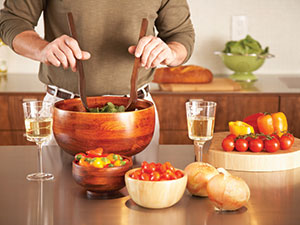 The CDC, working with Eating Well magazine, has created a website devoted to healthy recipes and lifestyle tips. The site is called the Healthy Eating and Lifestyle Resource Center, at recipes.millionhearts.hhs.gov. Not only are there hundreds of recipes on the site, there also is a menu plan designed to help you lose weight. The four-week plan has three options: maintain your weight, lose one pound a week or lose two pounds a week. The plan even comes with a printable shopping list.

According to the CDC, the website was created as part of the Million Hearts initiative, which was launched in September 2011 with the goal of preventing one million heart attacks and strokes by 2017.

People who spend more time preparing their own meals tend to eat more healthfully, according to research by the Center for Diet and Activity Research. Examining data from a 2009 study on obesity, a research team at the University of Cambridge in the United Kingdom concluded there is a link between cooking and what people eat.

Those spending the most time in the kitchen also spent the least amount of money on food—about $7 less per family member—than any other group.

The authors of the study, which was published in the American Journal of Preventive Medicine, cautioned that their research doesn’t prove a correlation between time spent on food preparation and healthier diets. However, says Monsivais, “We should be aware up front that if we have intentions of having a healthier diet it might be the case that we just have to spend more time in the kitchen.”

This juice can have you hopping around in no time

What’s green and red, goes 175 miles an hour and can help cure what ails you? A frog in a blender.

Turns out, that’s no joke to some people in Peru, who believe a blended drink made with frog can cure everything from asthma to tuberculosis. The recipe is simple: Place one dead, skinned frog in a blender, add carrots, maca root and honey, and puree.

Of course, you can’t use just any old frog. You must use the Titicaca water frog—which may explain why the frog is listed on the “critically endangered” list by the International Union for Conservation of Nature.

Although Andean cultures swear by the drink’s ability to help with anemia, bronchitis, fatigue, stress and other ailments, there is no scientific evidence that the elixir really works.

We love our meat

Think vegetarians are a growing force to be reckoned with, menu-wise? The Humane Research Council says, not so fast.

A recent study by the animal rights group contains some interesting “bites” of information. According to the survey of 11,000 adults, conducted by Harris Interactive, a mere 2% of Americans say that they are vegetarians or vegans, and only 12% have ever even tried to go meatless.

In addition, of those people who were once vegetarians, 84% have gone back to being omnivores. However, the study also revealed that 37% of former vegetarians said they would consider switching back at some point.

17% of Americans are snacking more

That’s the percentage of Americans who say they are snacking more than they did a year ago, according to a Nielsen survey of 1,139 people, commissioned by General Mills. Other numbers from the survey: 91% said they snack at least once a day, 21% said they snack three or four times a day and 3% said they are” always snacking.” When it comes to snacks, the survey revealed that women prefer chocolate, candy or cookies. For men, the snacks of choice are pretzels and chips.