Some are increasing prices while others find creative ways around doing so. 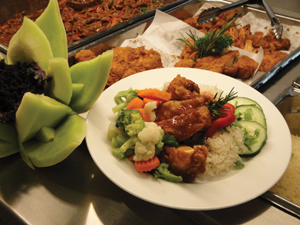 Increasing prices is always a juggling act. Operators have to cover rising costs, but they have to do so in a way that won’t anger customers. FSD talked with operators to find out when they raise prices and also to see how they get around an increase.

For Patti Oliver, director of nutrition services at 525-bed Ronald Reagan UCLA Medical Center in Los Angeles, 2008 was an especially challenging time. Not only did the hospital move into a new building in June, the CFO mandated a 14% price increase for items sold in the hospital’s foodservice operations.

Normally, Oliver says, she must raise prices between 3% and 5% a year. But because of higher labor and benefit costs and the higher than normal increase in food and fuel prices last year, the hospital had to increase prices more than usual to cover costs.

“Our challenge was not just keeping the same food items with a 14% price increase, because we knew that people were going to be upset no matter what, but we thought that we could at least have an upscale menu,” Oliver says. “So instead of having a hamburger, we have an Angus burger. The new sandwich bar has six or seven upscale sandwiches, with some high-end ingredients. We tried to do this in order to justify the price increase.”

Oliver says the plan did backfire a little. “Some people said there are families that come here that don’t have money and they come into the cafeteria and can’t afford to eat,” she says. “So we put back some of the lower-end items, like a plain hamburger, a corn dog and a grilled cheese.” 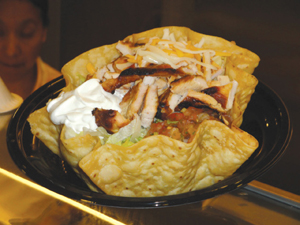 Farris says the economy is dictating when the next meal price increase will happen. “We have definitely talked about how the economy is affecting our families,” she says. “We’ve said that we’re going to have to live within our means for as many years as possible.” Farris says the district is also trying to reach out to the community more to let them know that the district’s meal program is a good option when the economy sours. She has seen a 2% increase in the number of students who qualify for free- and reduced–priced meals.

Creative solutions: Some operators have found ways to prevent or limit price increases.

Len Ayers, director of food and nutrition services at 200-bed St. Mary Medical Center in Hobart, Ind., noticed many of his cafeteria patrons ate their meals out of disposables instead of using china. “Disposable costs went up about 10% or 15% last year,” Ayers says. “So I asked the administration if we could impose a fee to help us increase our revenue and to pay for our disposable containers.”

The administration gave Ayers the go-ahead, and in February 2008 a 32-cent fee for each to-go container was implemented. The move has been successful. It costs the department more than $8,000 to purchase the disposables. More than $26,000 was raised from the fee, meaning the department saw more than $17,700 in increased revenue last year.

“We did not do a price increase last year,” he says. “We felt this was a way we could slide an increase in without actually doing a price increase.” Ayers says the number of people using disposables has remained about the same as before the fee was implemented.

Randy Sparrow, director of food and nutrition services at 355-bed Bloomington (Ind.) Hospital, created a “dead” product list. “As we change out products or we bring in new products and we quit using others, those items go on a dead product list,” Sparrow says. “We know we have these items and we need to use them, so we pull from the list to run specials in the café or for catered events.”

One such special was with New York strip steaks, which Sparrow says the department will only rarely menu. However, if the steaks are over-ordered, Sparrow will feature the item in the café as an unadvertised or chef’s special. “When they are gone, they’re gone,” he says.

Sparrow says this cleaning out of the inventory with the dead product list helps prevent some price increases. In the six years Sparrow has been at Bloomington, there have been only two prices increases, with the most recent one in March 2008. Sparrow says that increase was in part because the hospital introduced “green” disposables, which were more expensive.

Some operators are eliminating or reducing employees’ dining discounts. Carrie Der Garabedian, nutrition resources director at 101-bed Madera Community Hospital in California, cut the employee discount in half last year from 20% to 10%. “We’ve kept our prices constant,” Der Garabedian says. “I would rather combat rising costs by increasing our volume in the café and catering. It’s too hard to get customers back after you increase prices.”

Der Garabedian says there were a couple of reasons the cut was made. The first was the increase in food and fuel costs. The second was the state of California’s budget crisis last year meant that hospitals, including Madera, didn’t receive all their promised funding from the state. Third, Der Garabedian says that everyone was receiving the employee discount, even people who weren’t necessarily supposed to, such as the ambulance drivers.

In July, all Sunrise Senior Living Communities implemented a price increase for employee meals. The meals went from $1 to $3. Nina Dubman, a registered dietitian at The Fountains of Crystal Lake, a Sunrise Senior Living community in Crystal Lake, Ill., added new menu items in conjunction with the price increase, which she says has helped reduce complaints.