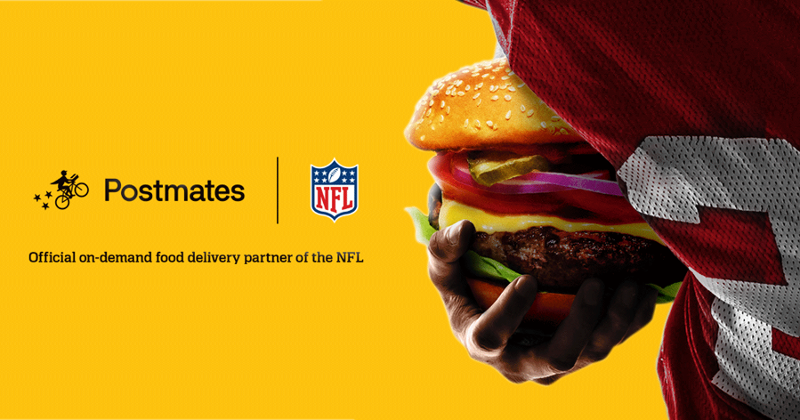 Photograph courtesy of Postmates and the NFL

Postmates will be the first official on-demand delivery partner of the NFL, the third-party delivery company announced Wednesday.

The deal includes official sponsorships of big NFL events such as the Super Bowl, Pro Bowl and draft.

It could be particularly significant for Postmates during a season in which more football fans will be watching from home due to the pandemic, and potentially ordering more delivery on game day. NFL games are already among the most-watched TV programming, averaging 16.5 million viewers per game in 2019, an increase of 5% compared to the year before, CNBC reported.

“While most fans won’t be able to physically go to the game, this partnership with the NFL allows us to bring the gameday experience, and a few surprises throughout the season, directly to fans,” said Eric Edge, senior vice president, marketing and communications, for Postmates.

The sponsorship kicks off Thursday night with the NFL’s opening game between the Kansas City Chiefs and Houston Texans. To promote the game, the teams’ quarterbacks Patrick Mahomes and Deshaun Watson will have Postmates deliver food to healthcare workers at Truman Medical Center Hospital Hill in Kansas City, Mo., and Ben Taub Hospital in Houston, respectively.

The multiyear agreement should also benefit Uber Eats, which in July announced plans to acquire Postmates for $2.65 billion.

Postmates is the smallest of the big four delivery providers, accounting for 8% of monthly sales in July, according to consumer analytics firm Second Measure. However, it has a large presence in some significant markets such as Los Angeles.