A need to solve an overcrowding problem at a Pflugerville, Texas, high school has led to a first for this Austin suburb. Aramark, foodservice partner for the Pflugerville Independent School District, has opened the first food trailer in town. 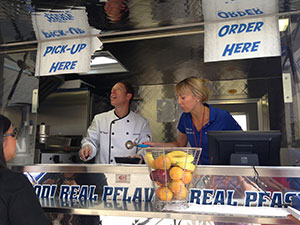 The Talon Taco Co. opened recently at 2,800-student Hendrickson High School, one of three high schools in the 29-school district. The trailer serves street tacos, made-to-order burritos and bowl meals, and orders and sales are tracked through a wireless POS system. All meals fall under the parameters of USDA-approved reimbursable meals.

Geoff Holle, foodservice manager for Aramark at the district, says the truck is serving as many as 300 meals a day, at a full-meal cost of $2.95.

“The students have chits that they fill out, where they select their protein—carnitas, shredded beef or chicken—and then choose from different vegetables and flavor-infused rices such as cilantro-lime. They can also do vegetarian,” says Holle.

The idea was conceived when district officials came to Holle in June, looking for a solution to overcrowding at Hendrickson. The district is planning for a fourth high school, but Pflugerville’s problem was more immediate.

“Within a week I had a detailed presentation from Aramark’s team that included additional seating and a serving line within the existing space for a made-to-order Asian-pasta fusion line. But it also included the option for a food trailer or truck.”

The idea of a food truck seemed like a no-brainer to Holle.

“The Austin area has quite a history with food trucks and trailers,” he explains. “It is definitely the food truck capital of Texas, and we actually have a couple of schools that are within the city of Austin.”

The trailer is situated right outside the cafeteria, less than 100 feet from the indoor server. There are 22 cafeteria tables outside for al fresco dining, and Holle says there are plans over the Christmas holiday break to put a cover over the seating area and add the ability to install heaters and cooling units, depending on the season.

“When we opened we started small, serving about 120 meals a day,” Holle says. “With the chits we are able to pace ourselves or limit the number of meals. We’re up to 300 a day.”

He adds that the Talon Taco Co. has attracted more students to the cafeteria, which has resulted in a small bump in overall business on the open campus.

Another benefit of the Talon Taco Co. will be realized this summer, when Holle plans to use the vehicle for Pflugerville’s summer feeding program.