Reducing landfill-clogging waste is the goal—and challenge—on many college and university campuses. 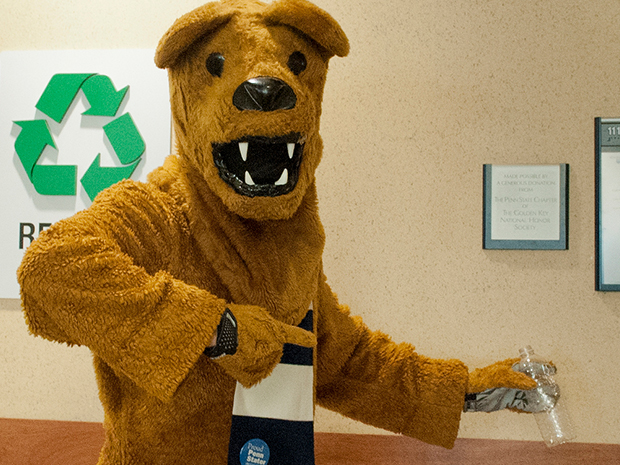 But a couple of workers in Pennylvania State University’s Physical Plant office have devised an ingenious system to audit, track and manage waste at campuses, businesses and other institutions. And they’re saving Penn State, and others, hundreds of thousands of dollars in the process.

The idea for the ReDi Index came to Al Matyasovsky in a dream several years ago. Matyasovsky, who is now retired, was the supervisor of Central Support Services in the Office of Physical Plant at Penn State’s University Park campus. He’d been asked by his bosses to transform the school into a zero-waste campus.

He wasn’t sure what that meant, though, in terms of quantifying the school’s efforts.

“I woke up in the middle of the night,” Matyasovsky says. “And I said it’s two numbers. It’s ‘response’ and ‘diversion.’”

When he presented the idea to school officials the next day, they asked where he found this system. “I said, ‘I dreamt about it last night,’” he says with a laugh.

So, how does the ReDi Index work? In short, it analyzes what an institution is doing with its waste and how well they’re doing it. The “response” number represents the percent of items in the waste stream that can be diverted from landfills through recycling, composting, re-purposing and more. The “diversion” number indicates how well a campus or business is doing when it comes to properly disposing of that waste.

An entirely zero-waste campus, for example, would have a ReDi Index of 100/100. That means all of the trash can be handled outside of the landfill and none of it is actually winding up there. Penn State currently has a ReDi Index of about 87/60, says Brendan Bagley, the IT specialist who designed the ReDi Index website (www.rediindex.com). The site allows users to analyze what materials make up the bulk of their trash, as well as connect with other users to swap ideas. (“It’s the social media of trash,” Bagley says.)

Whirley-DrinkWorks has used the ReDi Index since 2011. In that time, the company has reduced its landfill-destined waste from 129 tons to 8 tons. The company’s once-discarded plastics are being used for a new line of cups made from recycled materials.

“Penn State helped us to be better at tracking our own waste and is helping us continue our journey toward our own zero-waste goal by 2020,” says Beth Pellegrino, human resources director for Whirley-DrinkWorks.  Part of this journey has been our commitment to investigate sustainable, innovative materials. In 2015, we proudly launched our ReTree coffee mug made from 40% recycled paper.” (www.whirleydrinkworks.com/college)

At Penn State, the ReDi Index showed that food scraps made up the largest percentage of trash. So, the school started a massive composting program. Compost is used on campus landscapes and is sold to outside buyers.

Students have fully supported the zero-waste efforts and have been trained to separate their garbage into seven different bins, including compost, cans, glass and mixed paper. None of the school’s offices have garbage cans (everyone takes their own trash outside and sorts it), saving thousands on cans, liners and janitorial labor.

The school has also saved thousands of dollars in landfill tip fees, all the while earning money through recycling.

“How much treasure is in your trash?” Bagley asks.