At Pennswood Village in Pennsylvania, a community garden provides plenty of benefits, says Director of Dining Services Mary Cooley. Not the least of them is helping to reduce food costs. 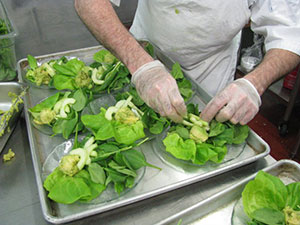 Every spring, residents (as well as employees) can sign up for one of the 50 individual raised-bed plots in the retirement community’s three-acre garden, according to Cooley. “Some residents have been using the same plots for years, and they grow flowers and a lot of vegetables,” she says. “We also have a couple fig, apple and peach trees grown by residents.”

Participants can also store some of their plants and produce in a nearby greenhouse, and there is a recycling area where they can create their own compost.

The process is overseen by a garden committee consisting of 16 residents who each serve two-year terms.

“We work in partnership with the garden committee,” says Cooley. “So I’ll go to the chef to find out what we need; it may be tomatoes, peppers or a certain herb or vegetable—this year we want to try kohlrabi. We tell the committee what we want and they’ll let the residents know. Last year we received about 50 pounds of squash, over 100 pounds of tomatoes, lots of cucumbers, collard greens, okra and a number of other things.”

It doesn’t matter if the produce is imperfect either, as Cooley says they will still use it. “We always have something going on, so we’ll use it either in a vegetable saute or the two soups we make fresh everyday,” she explains.

The garden has also brought a heightened sense of community to her operations. “The residents really get a charge when we feature their items on the menu or at the salad bar,” she said. “We ask that when they bring in their produce, they leave their name. We’ll then put up a nice sign that lets people know this vegetable came from this person’s garden. They congratulate the person and it’s a nice way for everyone to share in that person’s hard work.”

Overall, the best part is that employees learn to relate to the residents on a level they wouldn’t normally, according to Cooley. “It’s no longer, ‘How can I help you?’ Now, it’s ‘I saw what you’re growing and it’s awesome.’ So it’s a different, but good, kind of communication because now they are sharing gardening tips and the employees have a greater appreciation for our residents.”