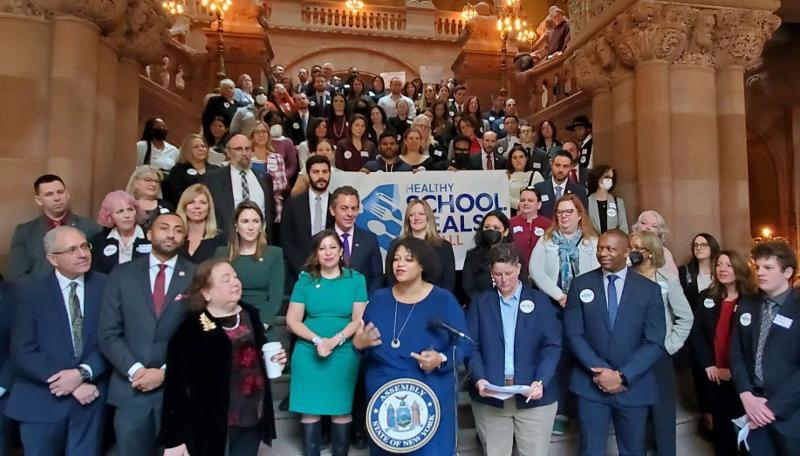 Photo courtesy of The Healthy School Meals for All Coalition

New York Senator Michelle Hinchey and Assemblymember Jessica González-Rojas joined other legislators, as well as education, anti-hunger, nutrition, health and equity advocates, at the state capitol on Monday to call on Governor Kathy Hochul to include funding for universal free meals in the state’s fiscal year 2024 budget.

“Kids can’t learn and grow into healthy individuals if they’re hungry, and it is incumbent upon us to make sure that by the time the last bell rings at school, they’ve had at least two nutritious meals to support their health, learning, and development," Sen. Hinchey said during the event. "We are fighting to make Healthy Meals for All a state priority so that every student in New York, no matter where they live or their family’s ability to pay, is guaranteed free breakfast and lunch at school.”

Over 726,000 students in New York lost access to free meals when the U.S. Department of Agriculture’s child nutrition waivers that provided free school meals to all students expired in June. In addition, the waivers' termination also caused school districts in the state to be hit with rising school meal debt.

Around half of respondents to a recent survey of New York's school nutrition operators said that unpaid meal debt is a challenge they’re currently facing, and of those, 73% reported that their debt is accumulating at a higher rate compared to previous school years.

Several states, including Nevada, have already expanded universal free meal access in their state for at least the current school year, and lawmakers in Nebraska, Missouri and South Carolina recently introduced legislation to bring universal free meals to students in their respective states.

A universal free meals bill was introduced in New York last May; however, it failed to pass.

Eighty-nine percent of New Yorkers say that they should provide universal meal access to students in the state, according to a survey by the NY Health Foundation.