“Going green” is becoming the design mantra for foodservice operators. 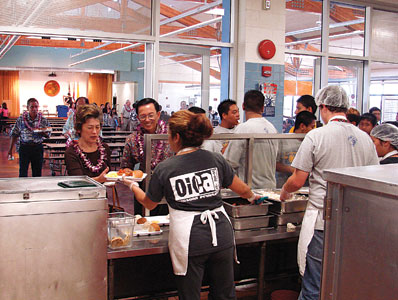 There is currently a lot of buzz about “going green” in noncommercial foodservice, particularly with design projects incorporating environmentally sound elements cropping up in schools, colleges hospital and corporate settings. The trend is giving operators a vocabulary of new phrases such as LEED-certified, biodiesel fuels, biodegradable disposables and waste composting.

“Sustainability is a very hot topic today,” says Todd Guyette of Colburn & Guyette Consulting Partners, Inc., Rockland, MA. “There’s a lot we can be doing because, from a design standpoint, foodservice is very energy-intensive. To go green can be less expensive [over time] despite the upfront costs, and can save operators money.”

Universities in particular are “really getting on board,” he says, often driven by student pressure, but also by government regulations. In Boston, for example, all new construction must now follow the U.S. Green Building Council’s LEED (Leadership in Energy and Environmental Design) regulations, while California requires new government buildings to be LEED-certified.

“Look at what can be done in the design itself to impact energy use long-term and select procedures that provide long-term sustainability,” she tells operators.

Energy guzzlers: Ventilation systems, she adds, use 25% of the energy in a commercial kitchen, a number that can be halved by decisions such as hood placement. Technology that reads heat and smoke  is “most important,” she says, noting that a typical marketplace concept might contain nine to 11 hoods.

Refrigeration also “is a very big deal.” Equipment that is self-contained has a shorter life cycle and is harder to service than remote units. Recycling and reusing water is extremely important in dish rooms. Other factors in green design might include recycled materials such as rubber tires for flooring.

“Carts and racks can be [made of] recycled aluminum instead of stainless, which has gone up in price 60% this year,” she adds. 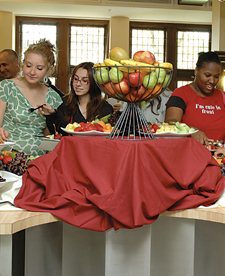 A sustainable operation is one involved in waste-to-energy programs, recycling, composting, and using oils from fryers for conversion to bio-diesel fuels. Ray Soucie, a vice president at foodservice consultant Romano-Gatland, suggests that operators create a “closed loop” from the back door through receiving, storage, prep, cooking, serving and waste handling as they design a facility, and examine how equipment can be changed for “sustainable design.”

Design schools: Recently, a new, $5.7-million cafeteria at 750-student Waipahu Intermediate School in Hawaii received LEED certification for such features as 100% natural lighting of the dining area, 65% reduction in irrigation water consumption, and effective natural ventilation. The school saves $3,000 a year from a 15% reduction in energy consumption. In addition, locally made and recycled materials were used to construct the cafeteria.

The University of California at Santa Cruz received a “green business certificate” from the city for renovations to two dining operations that serve 14,000 meals a day, says Director of Dining and Hospitality Scott Berlin. The renovations save “thousands of kilowatts annually;” reduce water usage from new low-flow spray nozzles; added grease traps and include composting. “We’re in a design phase now to remodel another facility and will be doing LEED certification for that, with new sensor-controlled grease hoods and new windows, starting next summer.”

At the Emma Willard School in Troy, N.Y., green design was used in an adaptive renovation that united two dining facilities into one servery/dining area with energy-efficient lighting, Energy Star-compliant pumps and motors, and low-flow faucets. Parts of the kitchen were 80 to 100 years old, says Facilities Director Ian Smith.

Going ‘greenware’: Fletcher Allen Health Care, Burlington, Vt., has been recycling for more than a decade, notes Diane Imrie, director of nutrition services. Now, her department is focusing on disposables, switching to “greenware” cups made from corn that can be composted. Composting food waste saves $18,000 a year in landfill fees, she adds.

At Concord (N.H.) Hospital, Foodservice Director Tom Serafin is working with the hospital’s vice president, Ray Gerbi, on a 160,000-square-foot addition to the hospital that will expand, renovate and redecorate the cafeteria and kitchen using LEED guidelines. Gerbi estimates the project will cost $800,000.

“We’ll use natural wood products, energy-efficient and natural lighting and low-VOC flooring,” says Serafin.
He’s seeking energy efficient retherming equipment and would like to learn more about the energy efficiency of manufacturers’ products. “If Energy Star ratings were on items I need, I’d certainly buy them.”

Greening of a High School

A new high school continues a history of environmental consciousness. 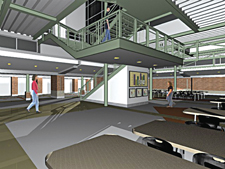 Becky Domokos-Bays, director of school foodservice for the Alexandria (Va.) City Public Schools, is no stranger to “going green.” Her district has long been a practitioner of conservation, with one high school becoming part of an ACPS Energy Star conservation program as far back in 1992. That program saved the district more than $175,000 over the past five years alone.

In addition, the schools began shutting off all cafeteria lights when natural lighting could suffice, for an estimated savings of $175,000 annually.

This fall, her department will operate a cafeteria in the new T.C. Williams High School, an $88-million facility that is expected to earn at least LEED silver certification, she says.

The new facility, which was in the planning for nearly a decade, has an LCD display that shows how energy is being used in the building. “It’ll help us train our staff to turn down the ovens as needed, “ she declares. “We’re doing really good stuff.”

All lighting in the building has motion sensors that detect when people are in a room and turn lights on or off as needed. A 400-gallon cistern on the roof collects rainwater for the toilets, and a garden on the top of the building also uses rainwater. Additionally, the school is recycling glass, plastic, metal, paper and cardboard.

The new kitchen includes “all energy-efficient equipment,” Domokos-Bays says. Plans call for recycling paper and cans and for composting cafeteria waste for “significant savings.” A new blast chiller will allow the school’s kitchen to more easily be used as a distribution center for the 17 other schools it services.

“The kitchen is designed to be more of a workhorse with a better flow of materials,” says Domokos-Bays. The loading dock has security cameras, and trucks can unload directly onto pallets and take incoming products straight to coolers. When commodities arrive, they can be stored on site instead of at a distributor’s, which represents another cost savings.

The 16 food ‘outlets’ are positioned in a food court built in a straight line. “Since 1965, this school has been an open campus and they could go off site to eat,” she says. “Now, all students have to eat here.”

Input from students prompted foodservice to give a “restaurant feel” to the design with mixed tables, booths and tables around columns. “They didn’t want a school cafeteria feeling,” Domokos-Bays says.

Ted Mayer talks about the work and the rewards of taking a “green” approach to design.

Ted Mayer, executive director of Harvard University Dining Services in Cambridge, Mass., wants his fellow foodservice operators to know first and foremost that the perception of green design as more expensive is wrong.

“It’s a misconception,” he declares. “The upfront costs may be somewhat higher but they are offset easily by the savings.” And the savings, he points out, can be significant. At Dunster-Mather Dining Halls, part of the university’s “house” system of dormitory complexes, he oversaw a major $7.1-million renovation that became the first internal foodservice kitchen to receive LEED silver certification from the U.S. Green Building Council in the summer of 2005.

“Our dish machine saved us $6,000 in soap alone in the first year. It also saved us 5,000 gallons of hot water a year, which translated into $18 million in savings. The entire focus in the project was foodservice. I funded it and controlled the process. Dunster-Mather serves 850 students a year, or 284,000 meals annually.

At Dunster-Mather, the challenges involved looking at equipment in a lot more detailed way than previously. We tried to get the biggest bang for the buck in energy savings. We built in equipment for recycling and composting kitchen waste. We put in dual flush toilets. We now collect waste oil from the fryer [which is plumbed and filtered for use in trucks that run on vegetable oil].

We recycled 95% of the construction waste through contacts that found places that could use our old equipment. It was a process of building relationships and getting everybody on board.

You get credits [in the certification process] for where the materials you’re using are from. Values are given to each part of the phase such as the finishes and the lighting. It’s a complicated system.

Often the people involved in a renovation aren’t involved in the actual operation [of what’s being renovated] so you get a sort of disconnect. You’re trying to save money in the building process. We connected these two groups so we could have long-term savings.

You always weigh the value of each purchase, its use, its purpose, but you have to make compromises in a project like this. We got silver certification on Dunster-Mather because we couldn’t afford gold. The more information you have up front, the better choices you can make. These kinds of projects take a lot of planning. We plan a year ahead with the LEED checklist in front of us at every step.

The next new building will be a Science Center in Allston, MA, which will have a foodservice facility. It will be smaller than Dunster-Mather.”