When the federal Healthy, Hunger-Free Kids Act (HHFKA) took effect about seven years ago, it was, similar to San Francisco’s polystyrene legislation, designed with good intentions: Provide the gold standard of healthy, nutritious food for children. But at the end of the day, students need to actually eat the healthy food they’re given to reap its benefits. As one Ohio school nutrition director, Jessica Shelly, puts it, “I’m in the business of filling stomachs, not garbage cans.”

Education has long been compared to a “three-legged stool,” with school representing one leg, students the second and parents the third—with all legs tasked with equal but unique responsibilities for the stool to stand upright.

Shelly, director of child nutrition and wellness for Cincinnati Public Schools, offers a modern-day twist centered around school feeding: One leg of the stool represents state and federal laws; another, school cafeteria budgets and subsequent meal plans; and the third student participation in the program. “If one leg is uneven, the stool topples over,” she says. “It’s a balancing act, and all three have to be in alignment.”

Shelly is eager for better alignment as she anticipates potential federal Child Nutrition Reauthorization (CNR), the process through which school meal programs are refunded. It’s potentially slated to occur this year or next, marking nine years since the last reauthorization. “I have my fingers crossed for CNR, and it’s my hope that several common-sense [decisions] will be applied,” she says.

Some of the “common sense” moves she is hoping for include: allowing the Children’s Health Insurance Program (CHIP) and Medicaid to be used as part of direct certification for meal eligibility; an increase in meal reimbursement rates; an increase in commodity allocations; and the continuation of the Community Eligibility Provision.

Shelly says that an expansion of eligibility through CHIP and Medicaid would capture more kids entitled to receive free meals—en route to a universal free system. “In my district, there are families on the cusp of being free-meal eligible, so [by] capturing them through the CHIP/Medicaid idea, X percent more would qualify,” she says.

“If one leg is uneven, the stool topples over. It’s a balancing act, and all three have to be in alignment.” —Jessica Shelly

At Lakeside Union School District, which has 5,000 students and serves 500,000 meals per year, Spero is also hoping for an increase in meal reimbursement rates to “help cover the gap between true program costs and what we are being reimbursed for—to close that gap.”

One polarizing topic over the past several years has been the HHFKA, a hallmark of the Obama administration. In 2017, U.S. Agriculture Secretary Sonny Perdue loosened some Obama-era requirements that schools would need to meet to qualify for federal reimbursement for free or reduced-price lunches. School meal programs were no longer required to implement certain whole-grain, milk and proposed sodium reduction goals from the original law, which many FSDs have criticized as extreme and sudden.

The less-stringent policies spawned litigation in April when several U.S. states sued the Trump administration to undo its decision, arguing that the rollback ignored federal dietary guidelines and scientific research on children’s nutrition and making meals healthier when it eased the rules.

Some operators, however, appreciated the leeway the new rules gave. “I have no problem giving kids a little bit of sodium or a couple grams of sugar in a chocolate milk because they were tossing out the fat-free white milk,” says Shelly, adding that “our meals [are prepared and formulated] no differently than before the [2017 USDA] flexibility was made permanent—I just don’t have the burden of additional paperwork to submit.”

Following the relaxed provisions in 2017, the nutrition team at Cincinnati Public Schools didn’t make many changes, revising only a small percentage of its recipes. Doing so may have “insignificantly increased sodium levels or changed to a non-whole grain-rich item, but 95% of our grains are still whole-grain rich,” Shelly says, “and we still met sodium Target 2 for our lunch menus.” 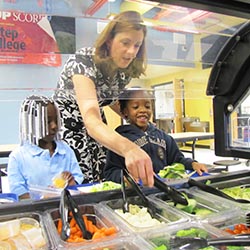 Other operators, however, worry that the added flexibility of the rollback sends a bad message. Robert Lewis, director of nutrition services for El Monte City School District in El Monte, Calif., says his team “will continue on our advanced nutrition path. I’ve been here 10 years and have seen two generation of students that have been exposed to only heathy foods. I can’t speak for other people’s experiences, but we’re not rolling back here in El Monte. While it was not easy to make these changes—we’re now [in full compliance].”

Recent legislation is putting the issue of lunch shaming under the microscope, as states and municipalities seek to ensure students can receive a hot lunch without stigma around whether they can afford it. “School meals are as important to learning as textbooks and pencils—ideally, we would have funding to serve all students meals at no charge,” says Jessica Shelly of Cincinnati Public Schools, whose district serves 25,000 breakfasts a day and 35,000 lunches, with 84% student participation.

Within the current system, here’s how some states and school districts are tackling lunch shaming: