REDMOND, Wash.—Meetings @ Microsoft, the conference and catering arm of Microsoft at its Redmond. Wash., headquarters, has introduced a new type of catering service for pick-up or drop-off customers. Called Outta The Box, the program was unveiled at Microsoft’s //oneweek annual meeting and product fair and rolled out this fall. 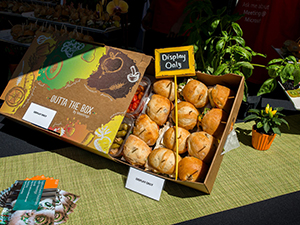 “We had had a pretty standard boxed-lunch program for the last five years,” says Jodi Westwater, senior director of marketing, communications and advocacy for Compass Group, Microsoft’s foodservice partner. “It was a bit dated. The boxes were plain and you couldn’t see into them, and there wasn’t a ton of menu variety.”

In addition, Westwater adds, focus groups conducted earlier this year indicated that a number of Microsoft employees were becoming big fans of restaurants such as Jimmy John’s and Panera Bread.

“They wanted us to get more creative,” she says. “They really wanted to have some different tiers of catering that could be picked up or dropped off.”

Outta The Box offers two different levels of service, standard and executive. The standard menu offers housemade sandwiches, sides, salads and fruit in two different formats. The individual style packages each order in a separate, see-through box. The group style provides a variety of sandwiches in a drawered box. Customers slide open the drawer and choose what they want. The executive style offers this same service, but with a more upscale menu.

The program also plays up the local angle.

“Part of what also sets us apart is that we now call out our local vendors—bakery, farmers, etc.—right on the box,” adds Kim Hudson, senior director of events for Meetings @ Microsoft. “We felt it was important to showcase that aspect of our program. In addition, the boxes are fully compostable.”

Outta The Box reflects Ingredient Revolution, the newest approach to food that both Dining & Meetings @ Microsoft currently have underway. Ingredient Revolution focuses on food chain transparency and as much local sourcing and scratch-made, in-house offerings as possible.

“All meats offered in the Outta The Box program are house-roasted, and all sides and dressings are scratch prepared,” Westwater notes.

Among the new sandwiches created for Outta The Box are a house-roasted lemon pepper turkey breast, a smoked prime rib and a pickled forest mushroom. All were sampled at the //oneweek event.

The other important aspect of Outta The Box, according to Hudson, is portion size.

“There was a time when we thought value meant giving customers a lot of food,” she says. “The reality was, we were actually giving them too much. A lot of food was going to waste. So we’ve reduced portion sizes. Also, some customers like to try different things, so we’ve created mini-sandwiches for customers who want to order a couple of different items.”