Continue to Site >>>
<!--Wincup FSD through the end of January, pending--!>
Edit 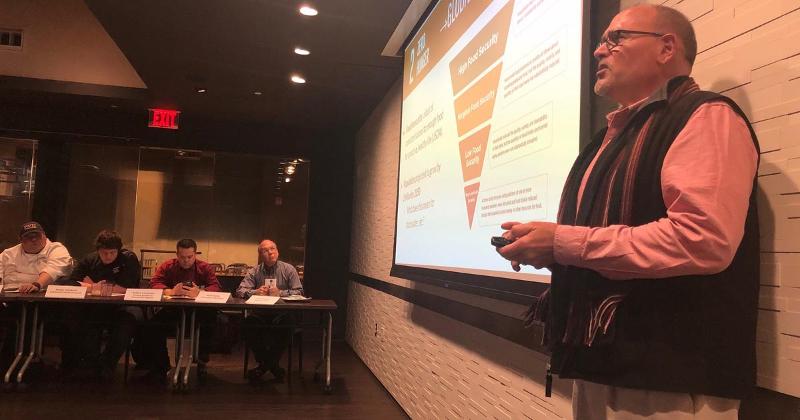 Sustainability has taken center stage at the University of Michigan in Ann Arbor, especially as the university strives to become a carbon-neutral campus within the next 10 years, attendees of FoodService Director’s recent Culinary Council Chefs’ Summit learned.

During the Summit, held this week at the university, Keith Soster, Michigan Dining’s director of student and community engagement, sustainability, and training and development, shared how the dining team is doing its part to create a more sustainable community.

Looking at the back of house

When Soster first came to the University of Michigan, he focused on back-of-house waste.

“My first step was to do preconsumer composting, which means collecting scraps in the kitchen,” says Soster, adding that the process was “relatively easy.”

“It opened [our chefs’] eyes as well because when you walk past a bin with all this food that's in there that is considered scraps, you start looking to see: What really are the scraps and what are people just cutting and trimming?”

Following the success of the preconsumer composting initiative, Soster says that he had an easier time getting the community on board when tackling larger projects.

“After that, then you get people to buy in, because they see the savings in food costs and they see the savings of not throwing away food,” he says. “They're focused on sustainability, and we showed them how easy it was to adopt, and then we can turn to bigger and better projects.”

One day at a time

The university has also rolled out Sustainable Mondays, one day a week during which the dining halls don’t serve red meat.

“It's not about eliminating red meat, but educating on red meat consumption,” Soster says, explaining why the university decided against getting rid of red meat entirely.

When the dining team first rolled out the initiative, a student group measured how much carbon was produced during a Sustainable Monday compared to a normal Wednesday when red meat was available.

They found that, on average, a typical day in the dining hall produces more than twice as much carbon than it does on a Sustainable Monday. Soster also has student interns tracking the carbon footprint of individual food items so chefs can get an idea of what the carbon footprint would be when putting recipes together.

As with red meat, Soster opted to not completely eliminate plastic water bottle use on campus, but instead make little changes that he says can add up.

“We have 10,000 students that live on our campus. …  Another 35,000 attend school, and then there's 46,000 faculty members out there,” he says. “So if everybody stopped with one plastic water bottle, think of how much that would save over the course of a year's time.”

Michigan Dining distributes reusable water bottles to incoming freshmen every year. As the new students walk to convocation, dining staff pass out the water bottles and talk to students, Soster says: “Along the route, we try to educate about our goals, which are centered around food waste, water, energy and then culture.”

Sustainability takes shape in a straw house at University of Michigan