During the MenuDirections conference earlier this week in Charlotte, N.C., FoodService Director staged its second culinary competition. Four two-person teams, drawing chefs from all five of our major market segments—schools, colleges, hospitals, senior living and B&I—competed in a market basket-style event that tested not only their ability to use a diverse array of ingredients but also to learn to work together with a chef they’d never met until a week before the competition. 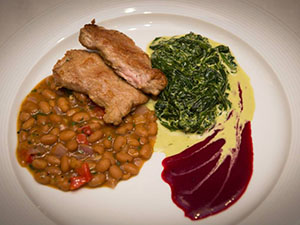 In 2013, we premiered the event in Tampa, Fla., and it was a huge hit. We didn’t know what to expect, but although we had a few glitches, the event went off much better than we could have imagined for a first-time effort. So, as we prepared for this year, there wasn’t much that we had to tweak. But we went ahead and played around with it, anyway.

The unique aspect of our culinary competition is that the chefs are chosen randomly and paired with someone with whom they’ve never worked. Last year, the pairings included two university chefs, two hospital chefs, two B&I chefs and two senior living chefs. This year, we added a new wrinkle: None of the chefs would be matched with someone from their market.

Our teams were: Justin Gillette, Atlanta Public Schools (Sodexo), and Steve Pexton, Rex Healthcare; Joe Kraft, Morrison Healthcare, and Robert Winther, Twin Lakes Communities; Darla Mehrkens, Carilion Clinic, and Melissa Martinez, Michigan State University; and Paul Nicolini, Penn State University-Scranton, and Tom Sewell, Florida Blue (Sodexo). They were introduced, via email, about a week before the competition and encouraged to communicate with each other about potential recipe ideas. But obviously, they had no chance to work together prior to event.

They were, however, told in advance what the market basket would consist of. (We’re not sadists). There were pork products from Hormel, four different sauces from Kikkoman, a variety of beans from Bush’s, and grapes, blueberries and lemon plums from the Chilean Fresh Fruit Association.

The teams were given 75 minutes to prepare six portions of an entrée, which they would then present to five judges: Annemarie Vaupel from Hormel, Erik Henry from Bush’s, Chef Andrew Hunter from Kikkoman, Chef Peter Fischbach from Gourmet Dining LLC and a member of our advisory board, and Darrick Henry from Baylor Orthopaedic Hospital, one of the winners of last year’s culinary competition.

We kicked off the competition at about 3:25 Monday afternoon, with Joe Kraft and Robert Winther drawing the first time slot. The other three teams started at 10-minute intervals. After all four teams were on the clock, conference attendees were encouraged by our MC, Stephen Gericke from the National Pork Board, to take a close-up view of the competitors as they worked and even to ask questions about what they were preparing.

It was an interesting dynamic early on, as Gericke walked around and “interviewed” the sponsors about their products and the chefs about the dishes they were creating. People milled about, some watching the event but most chatting amongst themselves.

The atmosphere in the room changed dramatically, almost precipitously, as the first team neared the T-minus 20-minute mark. People drifted toward the tables and the energy level ratcheted up several notches. Our MC took a break, letting the action speak for itself—and it did. We were keeping a watch on time, but even without the stopwatch you could tell as the chefs neared the completion of their dish.

Finally, it was “time’s up!” and Joe and Robert brought their plates before the judges. As they presented their dish, the crowd moved over to the second team, now with only 10 minutes to go. And so it went for another half hour, the excitement building as each team’s efforts were seen by the crowd and reviewed by the judges.

With less than 10 minutes to go for the final team, Darla and Melissa, disaster nearly struck. One of the induction burners apparently shorted out, leaving the team one burner short at a critical time, as both of their burners were needed. It was fortuitous that they were last, and we quickly moved Melissa to a now-empty station to complete her cooking task. To be fair, we added a couple of minutes onto their time to make up for the time lost in the shift.

And then, it was over. Darla and Melissa completed their presentation to the judges, who then retired to discuss what they had seen and fill out their ballots. The teams now had three hours to wait before the winner was announced, during the Awards Banquet that evening.

Here are the four dishes that were created:

Earlier in the day, as I was prepping our contestants before they entered the “kitchen,” Darla asked me a question. She said, “Are you saying it was totally random, two girls against six guys?”

Well, it turns out I was prescient, for it was indeed the ladies who earned the nod from our judges. They received a plaque, free registration to MenuDirections 2015 and an invitation to be judges at next year’s event. Not bad pay for 75 minutes’ work.

But really, our hats are off to all four teams, who demonstrated skill and creativity under fire while gaining 75 minutes of fame, and who undoubtedly took back more than a few ideas for their operations—which is why they came to MenuDirections in the first place.