Multi-purpose equipment and efficient design are ways to make the best use of limited space. 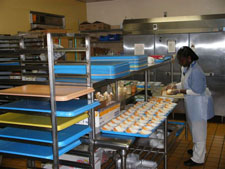 Operators not only can but must make the most out of limited space in kitchens and serveries these days—and it’s easier than they may think. Design, ergonomics, multi-use equipment, scheduling and even value-added services from vendors can all contribute to space and dollar savings.

“We try to pay a lot of attention to customer flow,” says Greg Kahaly, food and nutrition director at 350-bed AnMed Health in Anderson, S.C. During his operation’s busiest period, which is roughly between noon and 12:45 p.m., keeping customers from bunching up becomes paramount.

AnMed’s main campus notches cafeteria revenue of approximately $1.6 million a year on its main campus, with foot traffic in the 700 to 800 range, most of it between 7 a.m. and 7 p.m. (although there is a slower third shift). The first thing the foodservice department did was research traffic patterns in order to discern peak periods.

“We try to arrange our lines accordingly,” says Kahaly. “Like many other cafeterias, we do a scatter system and that is one of the ways we try to move our customers around. We plan for the maximum amount of people in there at one time and look at how we can make certain one line doesn’t back into another.”

Space in the kitchen is also at a premium, Kahaly reports. At AnMed, the cooks’ and tray lines “kind of run together. I’ve worked in three different hospitals during the course of my career, and it seems like there is never enough room. There is usually plenty of cooking equipment; there is just never enough counter space to do prep for it.”

The key to making sure that potential kitchen problems don’t become actual ones is scheduling tasks at different times “so that everything doesn’t bunch up together,” Kahaly says. For example, at AnMed, the salad and bakery departments are forced to use the same space. That means that “when we do our scheduling, the bakery people will do their heavier production at a different time than the salad area’s production time. Bakery is more of an early day—they start as early as 5 a.m., and the busiest time for them is between 6 a.m. and 7 a.m. Our salad area is busier from mid-morning to early afternoon.” 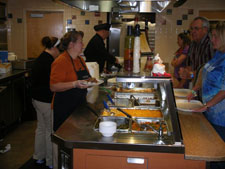 Kahaly also recommends that operators take time to consider space when planning equipment purchases. The size of a piece of equipment definitely plays a prominent role in his buying decisions.

“A lot of times people see the latest and greatest things and they want to have them in their kitchens, but they don’t think about practical matters—the equipment has to be installed and they’re going to have to be able to work around it,” he notes.

Kahaly says that he found that portable equipment can help save space and prevent clutter on his patient tray line. One particularly handy piece is a mobile air-curtain refrigerator that employees “can use to serve right out of. Then when the line is over you push it back, so instead of having two pieces of equipment you only have one.”

Staffers adjusted easily to the use of  the new refrigerator. As Kahaly explains, “When they do their prep work it goes right into that refrigerator, which is plugged in against the wall. But then when the line starts up they roll it out, unplug it, plug it in at the line and serve right out of it.”

Somewhere else: The Chandler Unified School District No. 80, in Chandler, Ariz., has found a way to ease crowding in its school kitchens by relocating food preparation altogether.

“Our district is a little bit different in the fact that our foodservice department has a 24,910-square-foot central kitchen cook/chill facility near downtown Chandler, that serves all 40 sites throughout our district,” says Wesley Delbridge, R.D., food and nutrition supervisor for the district. “What that means is, if you invest in space with a central kitchen the result will be [the need for] a small footprint and small square footage in satellite sites.”

As a result, the school kitchens “essentially become rethermalization sites,” Delbridge points out. “They’re not baking from scratch, so they don’t need to utilize the space for large pieces of equipment.” Labor savings also accrue because the school system “can have minimum staff out there because we invest the space and the time in our central kitchen.” The average size of the elementary sites is only about 1,200 square feet. A total of 38 employees work at the central kitchen, 27 of whom focus on processing food.

The Chandler Unified School District is composed of 29 elementary schools, four high schools, five middle schools, a preparatory academy and one other facility. It is home to approximately 36,000 students. School cafeteria serveries consist of little more than hot and cold wells, by which the children pass to pick up their food.

“Behind those with our staffers are usually two rethermalization ovens,” Delbridge says. “They have reach-in refrigerators and sometimes reach-in freezers, also. Because we have a large [20,000-square-foot] warehouse here at the central kitchen, we make a pair of deliveries daily to the units.” 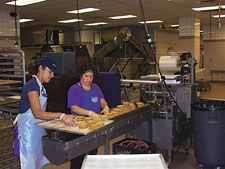 One of the innovative steps the school district has taken to save space has been working with vendors to provide the space instead. “As far as bids go, one of the ideas that came up was the result of a bid that we received from a produce company. They have a large warehouse, and one of the value-added services they offered us as part of their bid was to let us use their warehouse in case we had an overstock of something.”

For example, the school district is receiving a truckload of commodity canned tomatoes. “We got a really good deal, and it doesn’t come off our entitlement dollars if we take a whole truckload,” says Delbridge. Since there is no room at present in the district’s warehouse, he sent the shipment to the produce supplier’s warehouse “for them to stock for us, and we’ll pull as needed. It’s the first time we’re doing that and it’s due to how much we’re growing.”

At present there is no cost for the use of the space, although that may change. “In the future they might charge us a minimum price, but I’m going to try and work out a similar arrangement with more large vendors that I work with.”

At the district’s high schools, “where we always leave room to grow,” Delbridge has found space savings through the use of mobile carts. Using the mobile units “relieves some of the crowding in our cafeteria food courts, and then it doesn’t take up a whole section of the infrastructure. And the mobile cart can go anywhere.”

Items that managers know they will serve quickly that don’t necessarily have to be heated or kept on ice are taken out to these mobile carts, Delbridge explains. “We’ll offer beverages, sides, desserts and a lot of a la carte items.” The school district is currently looking into wireless technology so that students can access their payment accounts at the carts. “It can be just as good as going inside the food court, but they can go somewhere else where the lines are better. It would be, in effect, a mobile food court.”

Vitruvian Man: Laying out space for servery stations like exhibition cooking  can be as simple as measuring the reach of your arms, according to Rudy Miick, founder and president of Miick & Associates and Durga Institute in Boulder, Colo. “Imagine a more or less six-foot bubble, kind of like DaVinci’s “Vitruvian Man,” but with chef’s whites on,” says Miick. “I do my best to design work areas so that with arms extended and a slight stretch I can reach anything and everything I need to accomplish my task within that bubble reach.”

Next, Miick imagines a nine-foot secondary bubble overlaid on top of the first. “If I can’t reach everything I need within my six-foot bubble I can make just one step in any direction to get anything else I need to accomplish my task. This simple overlaid bubble ‘map’ has provided us really effective design space during the years—reach up, reach down, reach to the side, take one step only, if at all possible.

Miick reminds operators that space can also be money.

“The more steps I have to take, the more wasted time, energy and money is spent to deliver my products to guests,” he explains. Instead of wasted space, he urges clients to “maximize space and make a game out of work, allowing flow—almost dance—during production.”

Veteran foodservice consultant John Cornyn, a principal in the Cornyn Fasano Group, Portland, Ore., says that he has what he terms a “huge issue” with operators “trying to juxtapose expensive rent/construction costs for the back of the house—not just the kitchen, but support/storage space—with the current and unknown future costs of multiple deliveries.” He is also a proponent of multi-functional equipment such as combi-ovens, Turbo Chef ovens and clam shell grills that, while more expensive, “are often a necessity due to space constraints.”

The ongoing discussion around the relative merits of permanent and disposable wares “is still a significant issue due to the space and utilities needed for a dishwasher versus the storage space and cost of disposables,” Cornyn adds. Beyond that, he likes flexible-concept spaces, “which means that there is an upfront cost for more utility connections but potentially greater savings in the ability to quickly adapt to menu changes that will offer greater appeal.”

“Think vertical,” suggests Neil Ross of Birmingham Restaurant Supply Inc. in Birmingham, Ala. “Vertical refrigerators, freezers, holding and warming below counter height will work.” Increasing the height of walk-ins and using mezzanine-type storage above “is great for disposable ware.” Another space saver, he adds, is flexible refrigeration—“one unit capable of medium and low temp and rapid chilling.”

Ross warns that using combi technology and methodology in production “may increase the amount of conditioned storage space required.” Another tip: using covers to convert sinks to work surfaces as required and where code permits.