There was a time when food in a library was definitely considered a no-no, but as technology has changed libraries have become more welcoming of foodservice as a way to bring traffic back to the stacks. Although there are still some campuses with libraries that are resistant to foodservices, operators say there can be no denying that library cafés build buzz. 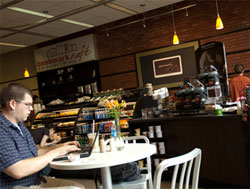 “[The café] was something the library wanted,” Lewis says. “I think the reason [libraries] now embrace food, whereas years ago they didn’t, is because they finally figured out that [foodservice] is an attraction for students. If you can keep students hanging out at the library, then that’s a good thing. So when they asked the [foodservice] department about building a café, my predecessor had been wrestling with it, thinking if it would be financially viable. When I got here, I said that [providing foodservice in the library] was the right thing to do for the program.”

Dennis Pierce, director of dining services at the University of Connecticut in Storrs, had a similar experience as Lewis in that the library sought out dining and not the other way around. The department’s Bookworm Café has been open for more than 15 years, but at the time the café was opened it was a new venture for the department.

“[The challenge of bringing the café into the library] was a combination of the desire to have foodservice at the library and not being sure what it would be like since it was our first one. We were really going into a retail environment that we hadn’t been in before, so it was a learning curve for us. We had to figure out what worked and didn’t work. “Originally, we were charged rent to be there as a tenant,” Pierce says. “Two years ago we stopped paying rent because we don’t pay rent in any other building on campus. I think it was very political. There was a concern about food being brought in and staining the books and such, but I know the rules have loosened up a lot. We now do about 13,500 checks per week, with more than $40,000 in sales per week in a semester.”

The library was also a good partnership for dining services at Pennsylvania State University, in State College. David Gingher, director of retail operations, says the library also came to his department to create Café Libro in the Paterno Library.

“We work really closely with the library,” Gingher says. “When it was built years ago it was just a basic area to grab a cup of coffee, and it continues to expand by offering pastries, grab-and-go bottled items, sandwiches and salads. We’ve run out of space.”

Volume has been the driving factor that has allowed Penn State to start conversations with the library to expand the café. From 2010 to 2011 the café’s revenue increased more than $200,000, a 26% increase.

“We plan to expand the space to offer additional foodservice area because [the café] is such a destination during the day and evening,” Gingher says. “[The library] wants to create a much larger seating area for the customers. Right now we only seat 25 people. It’s so busy it’s unbelievable. We do about 2,000 transactions a day.”

“We cloned the little snack boxes that Starbucks does with the fruit, cheese and crackers,” Pierce says. “We also just introduced a line of gluten-free sandwiches, which I haven’t heard of anyone else doing.”

Since Bookworm Café stays open the latest, Pierce says they’ve come up with a system to make sure it’s always stocked. The central kitchen makes all the sandwiches and salads in the morning, which then get distributed throughout the day to cafés across campus. When all the other cafés close at 5 p.m. any remaining product gets picked up and brought to Bookworm. Whatever is leftover when Bookworm closes is donated to a soup kitchen.

At Ball State, Lewis says the department chose to go with a more upscale product line at the library café.

“We chose an upscale product line because we wanted to have a higher price point because we needed a higher ticket average to make the location financially viable,” Lewis says. “One of the things we did was go with a locally produced coffee and promoted the local aspect of it. That’s been very popular. We strategically looked at the menu to cater to that library crowd.”

Challenges: Controlling volume and crowds is the biggest challenge for Bookworm Café at UConn. Pierce says the café has an adjacent seating area that seats about 85 people with large glass windows that overlook campus.

“There is always a line,” Pierce says. “We are currently working on specifications to upgrade this café and make better use of space. We’ll probably put that out to bid after July 1. We can’t grow any bigger than we are right now. When you get that kind of volume and foot traffic you have to figure out how to have enough product on hand. You have to think creatively in the way of multi-deliveries in order to keep your display cases filled. They get deliveries three times a day and they always have the ability to call and say, ‘I’m out of this or that.’ We’re very fortunate to have the infrastructure with our central production kitchen.”

Volume is also a challenge for Gingher at Penn State.

“We just try to be as well-stocked as we possibly can,” Gingher says. “We moved the coffee to be more of self-service. Streamlining and making [the café] as efficient as we can from our end is vital.”

Crowd control isn’t as much of an issue at Ball State’s Bookmark Café because the library gave the department an adequate amount of space, says Lewis. His challenge came when the library first approached the department to build a café in the space.

“The library was very good to us,” Lewis says. “They wanted us and they gave us enough space. The challenge after opening it was something we knew would be an issue, which was trimming the hours that we were open to the point where we could make it financially viable. [The library] would prefer that we were open until 2 a.m., but the customer traffic just doesn’t make any sense. Once we got going, we trimmed back the Friday hours. The big kicker was we kept it open the first summer. The second summer I said we couldn’t do it because there wasn’t enough traffic. They pushed back on that, but I just turned it around on admin and said if you want to pay for the loss we’ll keep it open and, of course, they didn’t want to do that so we closed it.

“That would be my advice,” Lewis adds. “It’s not an uncommon model on many campuses to negotiate with the building that you are in, in our case the library or other academic spaces, for a share of the profit. But also negotiate a full acceptance of the loss, so if the space loses $20,000 you turn to them and say, ‘You need to pay us. We’re supporting your program and we can’t afford to do it on our dime.’ Also be cognizant of operating hours. Don’t promise too much or you could get stuck with unprofitable hours.”