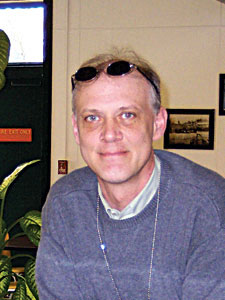 •MCC is a 2,560-bed institution with four sites; it's a close custody institution with a tray-on-tray retherm kitchen. Here, Holeman has succeeded in saving $20,000 per month by switching to a five-week menu cycle (from a six-week cycle).

•By consolidating inventories into one central location, he saved the facility $360,000.

•He includes inmates on menu planning committees to keep them satisfied and aware that their issues are being recognized and acted upon.

•Thanks to Holeman's efforts, the centeral food program (statewide) has moved forward with a heart healthy main line menu and also reduced the number of medical diets from 14 to six.

•He has empowered a full-time registered dietitian to be part of his foodservice team; he's also initiated clinical nutrition in-services by the RD for his staff-all enhancing communication, cooperation and collaboration.

John Holeman doesn't revel in serving 2,560 inmates for $1 per meal—a feat that keeps budgets in line and avoids food-related riots. Currently, he's on a mission to have the best correctional foodservice in the country while effecting a dramatic change in how prison personnel relate to offenders. Learning from his work behind the wall, Holeman is confident that no matter how difficult the job, he can do it.

"When I talk to people about Monroe, I don't get into the 'saving money' thing. I like to talk about the whole shift and reality of prisons and the way we have to interact with these folks who will move in next door to you [when they're released]. Truly, it makes tons of sense. Let's hope to heaven they're not hardened to the world [by the prison experience]. It's how we interact with this concept—it's a culture change, this shift that's going on around the country.

I meet with offenders monthly—myself and my secretary and about four to six of them [at a time]—and discuss their experience in the dining room. That's unheard of; 'How dare you open yourself up for [verbal] punishment, John?' others ask me. So there's the whole educational piece. Plus, the offenders learn how to conduct themselves. Meetings are driven by agendas and conducted on time. They're representatives of their offender groups. In these meetings, let's say my operation offered something cold when it should have been hot, or an item didn't meet the standards. We'll discuss that. We're not targeting individuals on our staff by name; this is a solution-oriented meeting to reach common goals. And the same dialogic meetings go on with my managers that oversee operations and they, in turn, with those under them. It's been going on since 2000.

My own mentors at a young age were probably my baseball and basketball coaches. I was naturally drawn to individuals who had some sort of teaching skills plus had accountability for themselves—Bobby Knight [winner of more NCAA Division I men's basketball games than any other head coach; commended for running clean programs] would be proud of me. Those were people I enjoyed being around. I was also attracted to those who were idealistically driven, not policy driven, people like [John F.] Kennedy, Martin Luther King, people who had dreams and could lead us to where we want to go.

I'd say Chef Jim Otto had the biggest influence on me in my career choice. I was 18 or 19, and his background was in yacht clubs—high-end, technical work like elaborate ice carvings, how to turn mushrooms into butterflies. He was soft spoken and charismatic. He was the chef and I was the sous chef there with him at Terry Avenue Freight House, an old train depot in Seattle, when it was named Restaurant of the Year in 1976. We did a lot of great work. I was doing well in private industry but by the age of 25 or 26, I wanted to transition from a high-paced life and settle down.

A real life turning point came much earlier. Growing up, I was always tall, and in junior high school I was 6'3” or 6'4”. I always made the basketball team because of my height, not because I was a good player. But the first year in high school, when I was 15, I decided I was going to practice and practice; I ate and slept basketball and I was at the local elementary school court all summer. There I met this guy who was 19 or 20 and he was trying [to practice] to go for a professional team. He took me under his wing and that summer he taught me how to play basketball. When school started that fall, there were tryouts—3 on 2 drills. I'm there, I'm on the wing, I went over the top of everybody and dominated all of them. The whole gym went silent. From that experience, I learned you can be anything you want to be.

Working in prisons, there is a confidence in my mind that no matter how difficult the job, I can do it. It's my opinion that in corrections, as you take on more and more responsibilities, you have to come in here and play a role well. If you can't separate the two [your personal life and on-the-job life], you have issues. It's like being Dr. Jekyll and Mr. Hyde. The reason for that is the pressures, the time frame, the responsibility to your staff. That's something I talk to new staff about: the high rate of divorce, the drug use in law enforcement caused by inner pressures of the work. The better you separate, the better shot you've got.

Really, I enjoy working around my home. There are always enough chores and I kind of enjoy them. And I enjoy playing cards with friends. I don't mind being a single parent. I'm not affected by the social pressures.

My daughter, Megan, is 14 now and I've had her since she was four, being the central role model in her life. It's been pretty easy. Her mom and I have shared the responsibility to go clothes shopping, but I took her to buy her gown for the Silver Plate dinner. I've got to let her take responsibility—but the first boy at the door will have to fill out a questionnaire.

Personally, I could have been the food program manager for the entire state—I was asked. But I'm staying, ensuring the continued change and efficiencies here at Monroe in consolidating this department and ensuring that the staff under me has the tools to be promoted to elsewhere in the state. I'm probably going to turn over 25% of my staff this year. Unemployment is so low—about 5% to 6% out here. I've had them leave to go to work in lumberyards for $17 to $29 an hour.

A challenging goal is to keep them trained and run this place effectively. I want to be the best foodservice operation in corrections in the U.S.: first in Washington, then the U.S., then we're going global. I think we're well on our way there in regard to accountability, structure, efficiencies and dialogic discussions.

I have on and off gone back to school; I'm carrying about a 3.6 GPA, but there are other things I'd rather be doing. Would I have greater ability to effect change? I don't succumb to social pressures. I think I found a niche and an area that needed someone to take a lead. I'll take that on.

Something kind of brushed over is my ability to persevere over the years. Twenty years ago, this department was 'there' but not considered a 'strength.' Now, they count on us, they rely on us. We provide this facility with more benefits than it being just about food. We provide jobs, training, insight, input. Seventy percent of non-turnover employees are probably some of the finest in the facility—that's my staff."