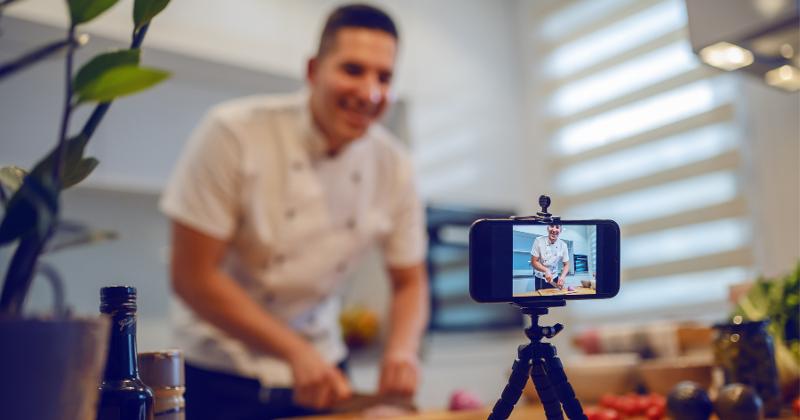 While students at Springfield Public Schools in Springfield, Mass., have been unable to eat school meals in person this year, they’re still able to learn about new foods and meet staff members thanks to a series of videos shot and edited by the nutrition team.

The Home Grown Springfield nutrition team, which is managed by Sodexo, began releasing the videos at the start of this school year to keep students engaged while they’re remote learning. Their first series, called Meet Our Homegrown Staff, focused on introducing families to the district’s dietitian, Erika Norwood, and has since expanded to feature other members of the team.

“[Sodexo] wanted a video featuring me and my job to really get the word out there about dietitians in the public school world and let parents know that we exist and what we do,” says Norwood.

After shooting the first couple of videos, the nutrition team decided to develop ideas for other video series. The districts’ other series offer food tips to families and give a behind-the-scenes look at what the nutrition team has been up to during the pandemic.

Offering an inside look

One of the series, called Tasty Tours, shows how kids’ favorite menu items are made at the district’s centralized kitchen. Before the pandemic, the nutrition team would give students tours of the space, says Field Marketing Manager Lydia Rodriguez, so Tasty Tours was a way to still offer that experience at home. “This way we can still show the students and the families what we're doing,” she says.

The team also developed a series called Chef Tips, which focuses on showing families how to properly reheat and store school meals and other creative ways they can personalize them at home. One video, for example, has one of the district chefs showing different ways to customize a grilled cheese sandwich

The team’s latest series, due out this month, will highlight five winning recipes that were submitted by students for the district’s Stirred Up Springfield Cooking Competition. The videos will feature the students cooking their meals at home and district chefs recreating the meals for school.

Coming up with video ideas is a team effort, says Rodriguez. Norwood and Rodriguez often work together to brainstorm ideas and also to shoot and edit the videos.

“We oftentimes are editing the videos ourselves, so Erica takes on the Chef Tips, I’m taking on the Meet Our Homegrown Spotlight,” says Rodriguez, noting that members of FoodCorps who work with the district also provide editing assistance.

Feedback on the videos has been so positive that the nutrition team plans to continue shooting videos even when the pandemic is over. The videos are their most popular posts on social media, and Rodriguez and Norwood have also heard positive feedback from students and families themselves when they’re out at the curbside meal sites.

“Every time we're out there, there's always someone saying, ‘Hey, I saw your video. I saw you making your meatballs, that was so cool,’ or, ‘I saw your Thanksgiving dinner,’ or ‘Oh my gosh, I just saw you’re serving shepherd's pie. When is that going to be on the menu?’” says Rodriguez. “So, people are talking about it and they're very excited, and they're looking forward to picking up those meals. For us, it's extremely rewarding.”

The meaning of universal free meals