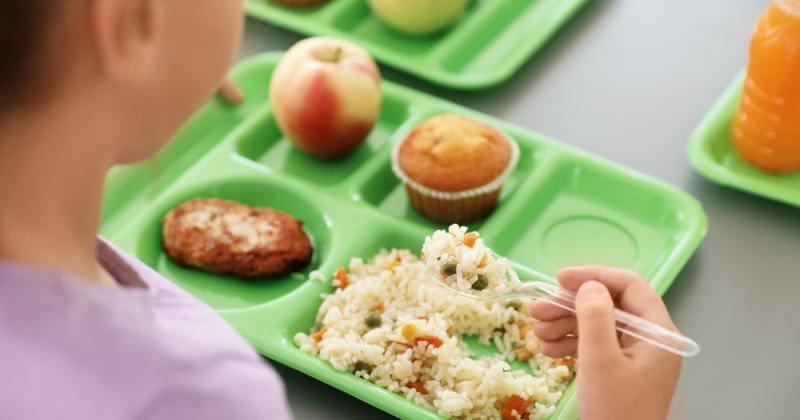 As soon as the pandemic shut down schools in Jefferson, Ga., last spring, Jackson County School System’s Food Service Director Dr. Debra Morris reached out to local nonprofit iServe Ministries. The district donated its perishable foods to the organization to create meal kits intended get students and families through the then two-week period that schools would be closed.

“Our staff members rallied around their schools, collecting everything,” says Morris. “We took it to the distribution points, we packaged the meals and helped to serve the meals to the families in the community.”

As the team realized the pandemic would not be over so soon, however, they quickly came up with a new plan to provide breakfast and lunch to area kids.

It took the entire Jackson County School community to get its emergency meal program up and running, Morris says. She divided her staff into five equal teams and had each work just one day a week so that employees could evaluate their health. She also reached out to local sewing professionals, who made masks for staff and the school nurses providing daily wellness checks for workers.

“We tried to create a healthy, a safe environment where people will feel comfortable coming to work to be able to do their job,” says Morris.

While the nutrition team was responsible for the food preparation, the transportation department took care of packing up meals and transporting them to students. Social workers at the district also made sure that families in need were able to receive the meals, and the superintendent came in every week to help where needed.

While the program had some bumpy days, especially in the beginning, the entire team worked to make sure that kids in the community were fed, says Morris. “We made good food happen, and we put it in the hands of deserving families.”

Meals to the classroom

It again took a team effort to feed students this school year. Approximately 78% of the district’s students showed up for in-person class, while around 22% remained at home. All who participated in person received individually wrapped meals in the classroom. The transportation department stepped in to help get meals from the district’s centralized kitchen to classrooms since there were not enough nutrition staff to prepare and transport the meals by themselves.

The district operated under that format until February, when it started allowing middle and high school students to pick up their meals in the cafeteria and return to classrooms to eat. The switch allowed the nutrition team to save on food costs, says Morris, since students could pick and choose the items they wanted to take.

“[Students] didn't just grab a complete meal kit—they had a chance to select the items that they wanted,” says Morris. “Everything was still prepackaged, though.”

The new format worked well, and Morris reached out to elementary schools in the district to see if something similar could be set up for the younger students. “Not everybody jumped at it, but we did have one elementary school principal who said, ‘I'm going give this is a shot,’ and it was successful,” she says.

Preparing for the new normal

As the current school year wraps up, Morris and her team are planning for what foodservice will look like in the fall. “We need to take a look at what some of those [COVID mitigation] best practices were,” she says, “and we don't need to throw them all out, but we need to need to preserve the ones that are beneficial to us in order to create a safe and healthy environment for our foodservice and to be able to serve our students.”

While Morris believes that students will be able to return to the cafeteria next school year, she thinks that self-serve will not be offered, and most items will still be individually wrapped. “I really don't see [self-serve] coming back like that for a while, if it ever comes back,” she says.

The nutrition team would also like to focus on making the cafeteria a fun, engaging place for students again through activities such as taste tests, and while the cafeteria may not look completely the same as it did pre-pandemic, students can still count on meals served with a smile.

“I am very fortunate to be surrounded by a wonderful team of dedicated individuals who really care about the kids that they serve,” says Morris. “They always come in with a smile to be able to serve the kids, so I'm just surrounded by a whole bunch of school nutrition heroes.”

How one school district increased its meal counts