A third-grader steps up to the front of the lunch line and holds her breath as the cashier swipes her ID card. Will there be enough money in her meal account to pay for today’s full tray, or will it be overdrawn again? 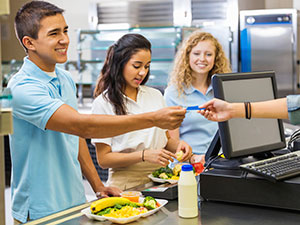 “You can’t really hold children responsible for the fact that their parents didn’t send money,” says Jill Kidd, director of nutrition services at Pueblo City Schools in Colorado. “It’s a real quagmire that every school district is having to address.”

According to the USDA, 1.1 percent of households with children (about 422,000 households) had “very low” food security, which means one or more child experienced disrupted eating patterns or reduced food intake at some point throughout the year.

By taking advantage of federal programs and partnering with their communities, K-12 operators are tackling food insecurity in their districts. Here’s a look at how they’re doing it.

Free meals for all

Since the creation of the Community Eligibility Provision under the Healthy Hunger-Free Kids Act of 2010, many schools with 40 percent or more students qualifying for free and reduced lunch have switched to universal free meals. Directors say they are seeing more students participating in the meal program, and as a result, fewer disciplinary problems, reduced unpaid meal debt and a positive reaction from parents.

Lyman Graham, foodservice director at Roswell Independent School District, Carlsbad Municipal Schools and Dexter Consolidated Schools in New Mexico, serves free lunch in his qualifying schools and free breakfast in the classroom at all schools. He does worry about the challenge of shifting population changing the district’s eligibility over time. “You do have to requalify every four years. … It does scare me that every four years you could get thrown off of it and you’re back to collecting applications,” he says. “The parents [would be] mad, saying, ‘How’d you feed them for four years and now you can’t? That creates a bad taste in the public’s mouth.”

CEP has allowed some districts to go entirely cashless. “There is no money being collected,” says Graham. “You just do a meal count. … We count trays and then we count heads of students that walk by.” Eliminating cashiers entirely does simplify service, though it brings its own challenges. “We have four or five lines, and without having students go through the register with their pin number, we can’t guarantee students aren’t getting more than one meal,” Kidd says. Going cashless would mean eliminating a la carte food options, which are a good option for older students. That’s why Kidd chose to keep the registers ringing at her district’s middle and high schools.

Breakfast or lunch might not be enough for some children in food-insecure homes. “A lot of students were coming to school the next day hungry for breakfast … telling us, ‘I haven’t eaten since lunch yesterday,’” says Whitney Ellersick, assistant director of nutrition services for Portland Public Schools in Oregon.  Because Oregon was a 2000 pilot state for the Child and Adult Food Care Program, which provides federal reimbursement for after-school meals, Portland Public Schools was in the first wave of districts to provide supper for students. Currently, the district operates 34 after-school supper programs.

Programs have to meet certain standards to qualify, such as providing after-school education or enrichment, so schools can’t just feed for the sake of feeding, even if the need exists, Ellersick says. “What we need is some understanding on the program side … that not everything’s going to fit in a box,” she says. “[The program] is very rigid in what has to take place.”

At Pueblo, 10 percent of the student population also is homeless and has an especially dire need for assistance. “We’re working on a food closet that a counselor will have access to … so students can get the resources they or their family might need,” Kidd says. “Some schools have done, ‘Wear jeans on Friday but bring a can [of food]’ or bring it to the big basketball game. That’s probably the model that will be happening.”