The coronavirus situation hasn’t yet come to a head in Orange County, Calif., where folks are “still preparing and waiting for our surge,” says Bill Lawhead, senior director of culinary and nutrition at UC Irvine Medical Center. “We definitely have cases, but not nearly as bad as what’s going on in New York and other parts of the world.”

However, they’re currently in a state of “preparing and overpreparing,” Lawhead says, and are getting ready for the worst. The 411-bed hospital canceled elective surgeries, has discharged many of its patients and is operating at about half of its census to make room for a presumptive increase in COVID-19 cases. (As of April 22, the county had 1,827 known cases of the novel coronavirus, according to local officials.)

As a result, patient feeding has slowed, and the cafeteria has seen a “huge decline in sales,” dipping from about $18,000 daily before the outbreak to just $8,000, Lawhead says. He notes that much of that drop stems from limits on hospital guests and a majority of nonessential staff not reporting to work.

Yet that slowdown doesn’t mean the foodservice department, which is run by Morrison Healthcare, is resting on its laurels.

In an effort to capture some of that lost revenue, the team came up with the idea for a pop-up market for hospital staff.

Lawhead started working with his executive chef and regional manager to identify items on hand that they could sell, such as bagels, peanut butter, rice and pancake mix. Market offerings, which are displayed in areas of the cafeteria that had been underutilized since the outbreak, evolved to include items that can be hard to find in stores right now, including eggs, bottled water, milk and other staples such as baby food and toilet paper.

As the market’s product mix grew, the team had to get a little creative with procurement, Lawhead says, which meant reaching beyond their usual vendors to get items on a smaller scale than, for example, the 25- to 50-pound bags of rice they typically require. “We’re not used to getting smaller cans of soup or manageable-sized bags of beans,” he says.

The team is also making sure busy hospital workers have access to food they don’t need to prepare themselves by assembling precooked to-go meals. There are two meal options offered daily, each of which can feed a family of four, Lawhead says. Employees can come to the cafeteria, supply their information and pick up a meal later to bring home. “It helps them out because they are on the front lines,” he says. “They’re working those long hours [and] possibly extra shifts for people calling out sick, so we’re trying to do everything we can to really help our employees out at the hospital and make their lives a little bit easier.” 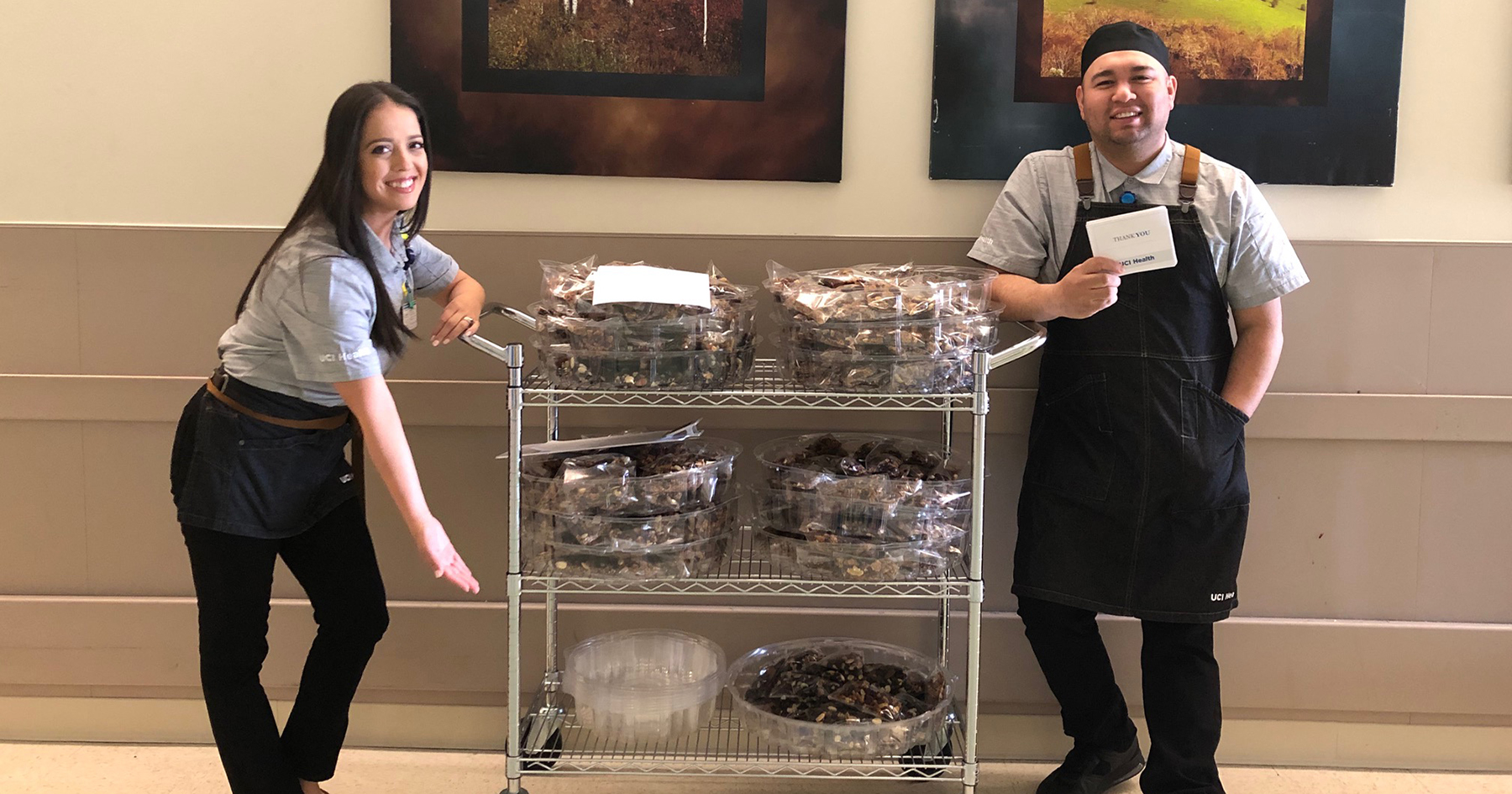 In addition, the to-go options are “very affordable,” he says. Family meals are sold for $20 to $30 apiece. Meals are built around themes, such as barbecue or Asian takeout, and each includes a protein, starch and vegetable, while desserts are available to add on.

The feedback so far has been great, he says, noting that “as long as people keep needing these items, we’ll be supplying them.”

And these endeavors have had a ripple effect. “What’s really cool is that UCI loved the idea so much that that they started to open up their own commissary,” Lawhead says. “It’s a daily free commissary for employees to come down and pick up items that they can bring home and supply their family with, and that’s on an even larger scale than what we’re doing.”

His team is helping the hospital supply the food offered at the commissary, which has been open for about three weeks, while other items have been donated or purchased. “Employees can come down about once a week and get some fresh produce, some grains, bottled water, toilet paper, all those essentials,” he says.

Though sales are down, everyone on the foodservice staff has remained on the job and hasn’t seen cuts to their hours, Lawhead says.

Yet to solve for the new reality, some have been repurposed into slightly different roles. “A real focus right now is inspecting and sanitizing, so we have dedicated people constantly circling the kitchen, the servery and the dining area, making sure everything—especially those high-contact surfaces—is being sanitized as frequently as possible,” he says. “We’re also spacing out our tables and our chairs to allow for social distancing and making sure we’re always keeping those arranged properly so people aren’t grouping together or getting too close.” 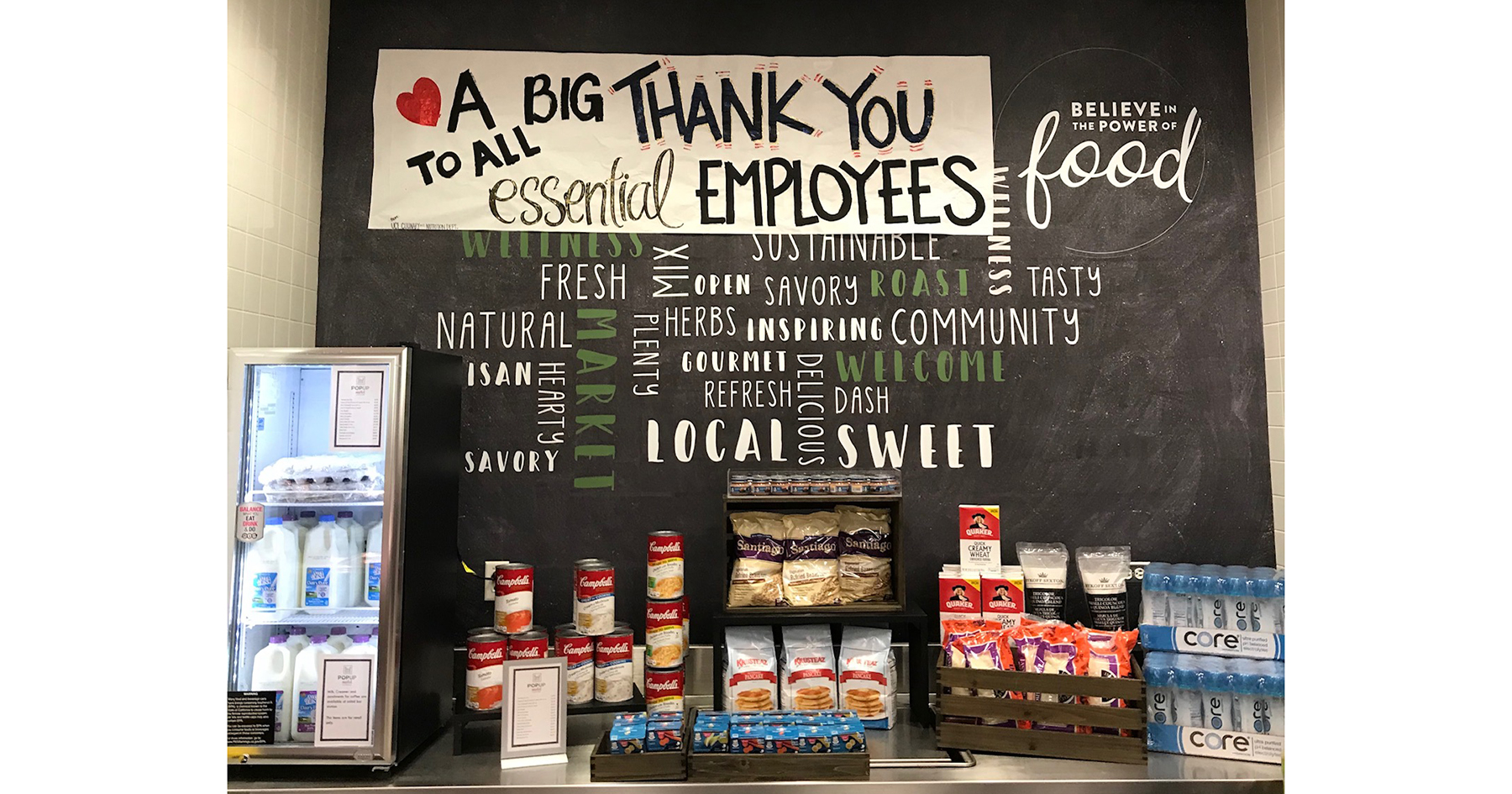 A form of delivery has also been added to the mix. The medical center is how home to six locations where staff can pick up meals ordered via app. “[That] once again keeps our kitchen and our dining area decentralized, and it spreads people out so we’re not having as many people come to one location,” Lawhead says. “A lot of things have changed very quickly.”