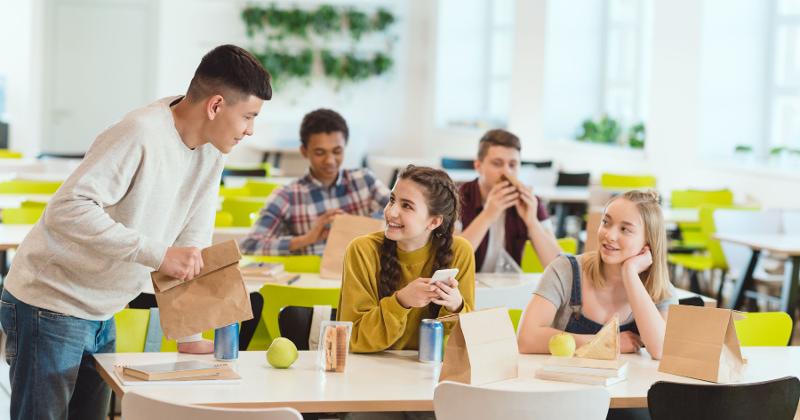 Sodexo has teamed up with nonprofit Swipe Out Hunger to bring its Meal Swipe Bank program to 40 college campuses. / Photo courtesy of Shutterstock.

Nov. 12-20 was Hunger and Homelessness Awareness Week, and foodservice operations across the country launched initiatives to put a spotlight on those issues and assist in the fight against food insecurity.

From meal swipe banks to free famers markets, here’s how colleges and universities, in particular, have been addressing food insecurity on campus, both last month and year-round.

Sodexo has teamed up with nonprofit Swipe Out Hunger to bring its Meal Swipe Bank program to 40 college campuses. Since the launch of the program in 2020, Sodexo has banked more than 15,500 meals and provided assistance to at least 1,100 students, said Sodexo’s Southeast regional dietitian, Cristina Caro.

Sodexo aims to bring the program to 100 college campuses, a goal it announced in 2020, but accessing the right technology has proved to be a challenge, particularly for smaller schools, according to Caro. For schools that lack the technology to provide a meal swipe bank, Sodexo has other initiatives in place, including a food recovery program that donates catering leftovers to local food banks.

The program functions similarly to a food bank, but rather than creating a physical pantry of food items, meal swipes are transferred into a “bank” to provide assistance to students dealing with food insecurity.

Sodexo donates two meal swipes for every meal plan sold, and students can donate any extra swipes they may have accumulated at the end of the semester. Students who are facing food insecurity can then access the swipe bank through their own meal card.

The anonymity of the program is one of its unique features, Caro said: “It’s loaded onto their own meal swipe card; they look like everybody else—it’s, like, incognito. Nobody has to know that they’re going through something because you don’t want to embarrass them.”

While some campuses may also have food pantries, Caro noted that sometimes students may feel uneasy about using them.

“They feel weird about using it, like ‘Oh no, that really should be for people, for students who are homeless,’ but food insecurity can affect even working students who are on meal plans,” she said.

Students who are facing food insecurity may struggle in their studies, according to Caro.

“From a wellness perspective, if you’re not adequately nourished—meaning you don’t have access to eat your three meals a day, whatever those meals might look like, its gonna diminish the student’s ability to do well in school, to make good grades. Because they don’t even have the calories or the micro- or macro-nutrients to support learning,” Caro said, “You’re not gonna excel in class, maybe you’re gonna get sick easier or hold onto illnesses or allergy symptoms longer because you don’t have adequate nourishment.”

Caro said that Sodexo has seen increased use of the Meal Swipe Bank this semester and that students have responded positively.

“80% of the participating students said they felt less stressed, and 44% performed better in their classes as a direct result of receiving those donated meal swipes,” she said.

Penn State and Swipe Out Hunger

Another partner of Swipe Out Hunger, Pennsylvania State University, generated $2,421 in donations through the program during Homelessness and Hunger Awareness week. The campaign has been extended through the end of the fall semester to encourage students to donate leftover dining dollars. Students on campus can donate $1, $5, $10 or $15 when they purchase a meal at a residential dining facility. The funds raised from the initiative are donated to the university’s student emergency fund, which provides short-term financial assistance to students experiencing food or housing insecurity and other unexpected emergencies.

Wayne State University has brought a similar concept to its campus: the Warrior Meal Share Program. The program allows students with meal plans to donate their extra guest meals. The meals are then loaded onto cards, which are made available to students in need.

“It’s anonymous, which is really good,” said Audra Forsberg, director of the OneCard, Parking Service Center and contract services at Wayne State, in a statement. “Sometimes students don’t want to come forward and ask friends for help, or sometimes a student wants to help but there’s some awkwardness with offering to help. With this, students donate, and privacy is protected because students can be anonymous when they pick up the card.”

To conclude a week of programming that brought attention to Hunger and Homelessness Awareness Week, Governors State University hosted an annual distribution of holiday food boxes.

San Diego Mesa College also hosted a week of events in honor of Hunger and Homelessness Awareness Week. The highlight of the programming was free food. The college hosted a free farmers market for students where no-cost produce was on offer. Additionally, it hosted an annual Thanksgiving feast, also free of charge.