To win the third annual MenuDirections Culinary Competition, Darin Leonardson, the director of hospitality at Golden Living in Plano, Texas, and Antoinette Bunn-Savage, the catering supervisor at Oklahoma State University, in Stillwater, Okla., decided to set themselves apart by serving up what has become many Americans most beloved meal: brunch.
The pair settled on a savory rendition: an airy, gluten-free fire-braised pork torta made with tamari and harvest mushrooms and a pork slider made with a ponzu sauce. 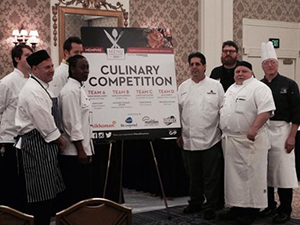 It was a decision that brought the duo recognition at Monday night’s MenuDirections 2015 awards ceremony in Memphis, Tenn., which is part of FoodService Director magazine’s annual conference geared towards foodservice operators and suppliers.

“We decided to do something different,” Leonardson said. “Everyone decided, we think, to do a pork entrée for lunch or dinner. So [we decided to] do a brunch.”

Prior to the culinary competition, the eight contestants were randomly selected from a hat and paired up into four teams. Each team’s members had one week to introduce themselves and plan their dish prior to the competition.

Entries were judged on taste, originality, overall presentation, appearance, and the dishes applicability in a noncommercial setting. Contestants were instructed to make an entree and a pork and mushroom slider using pork tenderloin, mushrooms and Kikkoman sauces. Leonardson says they settled on the dishes because of the cuisine’s versatility.

Although Leonardson and Bunn-Savage calmly and diligently worked to create their recipes during their allotted 75-minute time frame, by the time they brought their dishes to the judging table, they were relieved to be finished. “It was a lot of fun, but we need a glass of wine now,” Leonardson said.

The judges said the torta stood out in a close competition—the four teams were within five points of one another—because it’s a savory dish that could be served for breakfast, lunch or dinner. “It hits all three of your meal [periods],” Mehrkens said.

The other three teams in the MenuDirections 2015 Culinary Competition were: